Mozambique liquefied natural gas (LNG), the nation’s first onshore export project, is set to finalize $15 billion of financing commitments this month, according to South Africa’s Rand Merchant Bank (RMB), which is among those funding the facility. 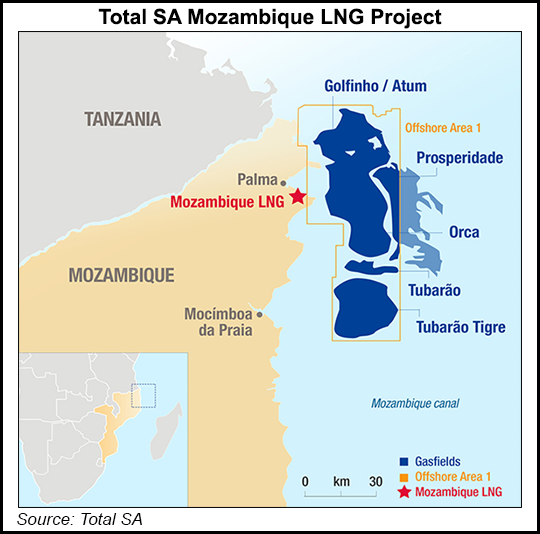 The move comes at a challenging time for the LNG market as a supply glut and the Covid-19 pandemic have complicated sanctioning as well as funding for projects and expansions. With a 26.5% stake in Mozambique LNG, Total SA would operate the facility.

“It will be a remarkable achievement in the circumstances,” said RMB’s Jonathan Ross, who oversees oil and natural gas coverage. “The backdrop could not have been worse for Total and partners to raise huge volumes of long tenor funding — the economic fallout of Covid-19 has put enormous pressure on banks’ funding and capital, and has triggered an oil price crash.”

RMB has other funding commitments, including the Coral South Floating LNG (FLNG) project offshore Mozambique. Coral South is a first-of-its-kind endeavor for the country led by Eni SpA. ExxonMobil, which has a stake, said earlier this year development was moving ahead. However, the major has delayed a final investment decision on the Rovuma LNG export project, which would be onshore Mozambique.

LNG financing has wavered this year. As the spot market has further developed and prices have cratered, it’s become a buyer’s world and offtakers have become more aggressive in their demands for long-term supply.

Gas prices have come under extraordinary pressure given the supply surplus and the demand destruction caused by the coronavirus. Storage stocks in Europe are overflowing, and while prices have firmed somewhat in Asia, buyers there are hunting for bargains on both spot deals and term supplies, searching for major concessions on prices and other terms.

Given the collapse in the arbitrage spread between the United States and markets in Asia and Europe, more than 40 U.S. cargoes for July delivery have been canceled, shipbroker Poten and Partners said during a webinar on Wednesday, while another 33 were canceled for June.

“LNG investment really went through the eye of the storm at the peak of the crisis,” said Poten financial adviser Melanie Lovatt of the pandemic’s impacts.

Major LNG players have taken $80 billion of investments off the table, according to Poten. Since March, at least 85 mmty of liquefaction capacity has been postponed.

As the pandemic took a toll on the global economy, companies tapped credit lines and put banks under stress. Lovatt noted that concerns spread across all sectors that funding requests would be denied or financing costs would spike. While things looked bleak, “the market seems to be stabilizing,” she said.

Poten said liquefaction sponsors closed on $8 billion of financing in May, including Nigeria LNG’s seventh train, the third train at Freeport LNG in Texas and bonds for Cheniere Energy Inc. as part of the ongoing refinancing program, among others.

Lovatt said more funding is imminent beyond the Mozambique signing this month. By the end of June, she said $23 billion of liquefaction debt could close, including for Russia’s Arctic LNG 2, Venture Global’s Calcasieu Pass export project in Louisiana and the sixth train at Sabine Pass LNG.