The world’s fourth-largest natural gas exporter is in the making offshore East Africa, according to Anadarko Petroleum Corp., which said Wednesday it has secured half of the needed offtake contracts for the proposed Mozambique project. 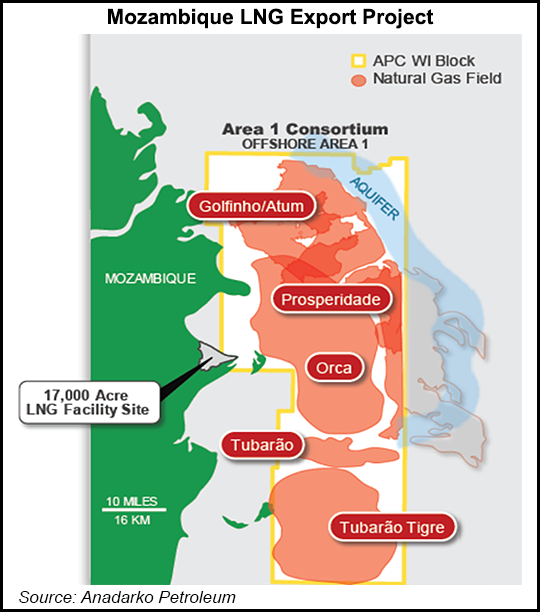 Anadarko, which has been working in Mozambique for about a decade, is working with a diverse set of Asia-Pacific partners to advance liquefied natural gas (LNG) exports from the near-shore region, initially known as Offshore Area 1.

The “world-class resource…is the LNG project of the coming decade,” Ingram said Wednesday. What makes it so attractive to the sponsors, besides its cost competitiveness, is the central location to key markets in Asia, Europe and South America.

During the fourth quarter, a heads of agreement was reached with Tohoku Electric Power Co. Inc., bringing one of Japan’s leading LNG buyers to the project.

Although the U.S. onshore now is Anadarko’s go-to for development and capital, Mozambique LNG offers a window into its longer-term plans.

Before an FID is made, the project needs to secure substantial sales and purchase agreements. To date, contracts for about 5.1 mmty of capacity are in hand.

“This puts us more than halfway” to an FID target of 8.5 mmty, Ingram said. “We’re currently negotiating with multiple buyers to fill the remaining volume necessary for FID. With each milestone, we’ve seen our Mozambique LNG project gain credibility in the market and support from the international and finance community.”

Securing takeaway contracts are the “key driver toward the FID date,” he told analysts. “In parallel to that, we are actively out in the market in terms of refreshing our pricing for the onshore construction activity and finalizing the offshore scope. So there are multiple things ongoing, in addition to communicating with the export credit agencies to ensure we have project financing in place at the same time.”

The partners now are considering how to advance more gas development offshore Mozambique, including the intriguing Offshore Area 4, where they may share common facilities, Ingram said.

To date, approximately 75 Tcf of recoverable gas has been discovered in the Offshore Area 1, the equivalent of a 12 billion bbl oilfield. Tests conducted through drillstem testing in the Prosperidade and Golfinho/Atum complexes have reported facility constrained flow rates of 90-100 MMcf/d, which Anadarko said supports well designs of 100-200 MMcf/d.

“As we’ve indicated…our first development to go to is 12.8 mmty,” Ingram said. “We’ll proceed with that and then we’ll carry forward with ongoing development.”

Onshore site preparation is underway to further derisk the project, which includes resettling people living in the area.

”We anticipate delivery of first cargoes approximately five years post sanction, which are a typical timeline to build a greenfield LNG development,” Ingram said. “Once the two trains are online, the potential repeat delivery and scalability…is phenomenal.”

Over the long-term, he said the project could deliver “stable production volumes of more than 1 billion boe net of recoverable resource and superior free cash flow.”