President Andrés Manuel López Obrador, reported to be recovering from the effects of the coronavirus in the National Palace, on Monday submitted a bill to congress that could change the rules of the game in the Mexican electricity market. 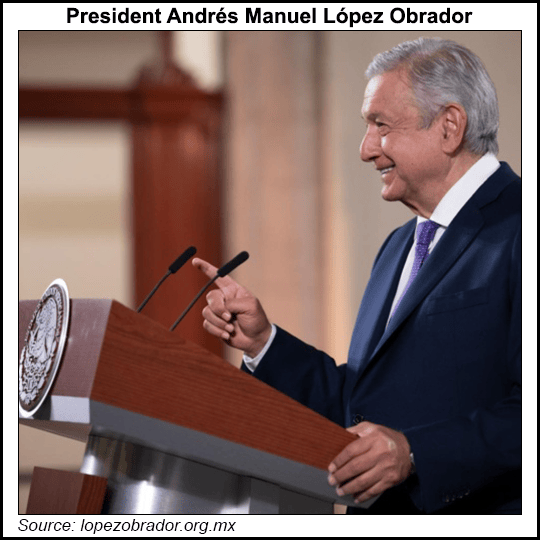 Analysts and sector participants have said the proposed changes to grant state power company Comisión Federal de Electricidad (CFE) priority in power dispatch would go a long way to scrapping the 2013-2014 energy reform that aimed to ensure a fair and competitive market in electricity.

As an “iniciativa preferente,” or preferential initiative, the lower house may be expected to approve the bill this month, followed by a senate vote by the end of March. As it stands, the president’s Morena party has a majority in both houses of congress, meaning a strong likelihood of its passing.

Energy Minister Rocío Nahle said in an interview on national radio that the legislation seeks to give the hydroelectric plants of the CFE top priority in power dispatch, followed by the CFE’s combined-cycle units. Private-sector wind and solar plants would be supplied at the end of the line.

According to the editor of daily El Financiero, Enrique Quintana, “In practical terms that would knock out the installed capacity that private investors have built ever since the final years of last century, when President Ernesto Zedillo was in power.” Zedillo was president from 1994-2000.

The proposed changes amount to a reverse in the rules that have marked two decades of easing of state control of the sector. The changes would also have an impact on investment generally, not only in electricity, said Quintana.

The bill could also lead to allegations of breaches of the North American free trade accord, the United-States-Mexico-Canada-Agreement, said Grupo Caraiva’s Ramses Pech, head of the Villahermosa-based energy consultancy.

“This will force up the costs of private-sector renewable plants, and that will surely be in breach of the USMCA regulations. What is more, with no system of free auctions, the door will be wide open to corruption,” he told NGI’s Mexico GPI.

The bill also proposes an analysis and changes to contracts awarded to independent energy producers that sell power to the CFE. Natural gas pipeline contracts with the private sector were also analyzed and redesigned by the government in 2019.

Analysts at political risk group Eurasia Group said the changes “would completely alter the incentives and relegate private players, hurting the economics of the investments in the sector. The government had already tried to do this last year through a decree, but this was stopped by legal challenges as it went against the antitrust regulations. This may still be an issue if the current bill is approved as is.”

Mexico City Mayor Claudia Sheinbaum defended the bill, indicating CFE has to buy power from private players whether they generate or not, harming the finances of the state utility.

Mexico’s influential business chamber Consejo Coordinador Empresarial called the bill an attempt at “indirect expropriation” which would lead to costly and additional state subsidies directed to CFE, higher power prices, and more contaminating energy use including fuel oil in generation. Their representatives also said the bill was unconstitutional and violated the clauses of international trade treaties.

The bill could yet be stymied in the courts, something that has been a common occurrence lately in Mexico’s energy sector.

On Wednesday, Mexico’s Supreme Court said changes last May published in the Official Gazette by the Energy Ministry giving CFE priority over renewable plants in power dispatch are unconstitutional. At the time, the ministry said the changes were needed to ensure stable and reliable power supply given the coronavirus.

In its 4-1 ruling, the court said the decree was anti-competitive and went against the principles of a free market in the generation segment.

Beyond the courts, changes in the composition of congress in the upcoming June midterm elections could also derail the president’s efforts at redesigning the energy sector in Mexico.