Nearly all U.S. points gained ground for the week ended July 21 and most points posted gains well into double digits. Gains at Northeast points were most impressive, with some points adding close to a $1. 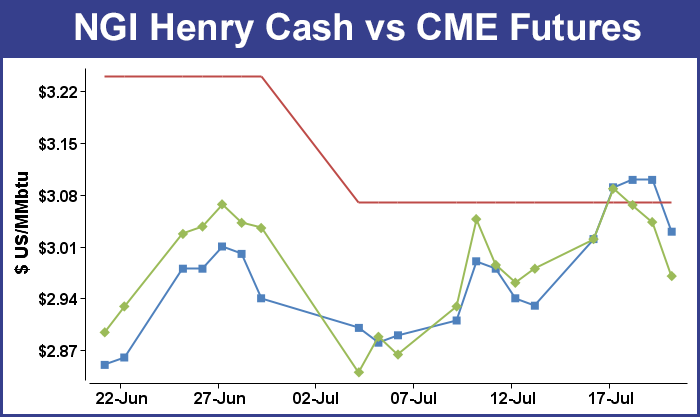 The NGI Weekly National Spot Gas Average rose 14 cents to $2.88. Of the actively traded points, Algonquin Citygate rose the most adding 73 cents to $3.23, and the greatest loser proved to be north of the border at Westcoast Station No. 2 dropping $C0.76 to $C0.93/Gj. Regionally, the Northeast led the pack, advancing 45 cents to $3.11, and California brought up the rear ,adding 6 cents to $3.00.

Thursday’s trading saw the Energy Information Administration (EIA) report a storage build of 28 Bcf for the week ending July 14, about 4 Bcf short of expectations, but traders were circumspect about any near-term market impact. At the close August had fallen 2.3 cents to $3.043, and September had retreated 2.2 cents to $3.033.

Natural gas bulls felt a glimmer of hope once the storage numbers rattled through the market. August futures gained ground following the report. When the lower-than-expected injection figure hit trading desks August futures rose to $3.114, but by 10:45 a.m. August was trading at $3.091, up 2.5 cents from Wednesday’s settlement.

Before the report traders were looking for a storage build higher than the actual figures. Last year 38 Bcf was injected and the five-year average stands at 59 Bcf. Ritterbusch and Associates expected a 47 Bcf build. A Reuters survey of 23 traders and analysts showed an average 32 Bcf with a range of +21 Bcf to +47 Bcf.

“The market really isn’t making a stab to get into the high ‘teens and just seems to be hovering in a range,” said a New York floor trader. “I don’t think the number had much of an impact at all.”

The Wells Fargo Securities LLC analytical team called the report bullish and said it reflects a market undersupplied by at least 2 Bcf/d.

“Based on current weather forecasts as well as elevated power burn levels thus far in July (35.2 Bcf/d month-to-date (mtd) versus 34.9 Bcf/d mtd in July 2016), our model projects a 46 Bcf cumulative storage build over the next two weeks,” said Wells Fargo analysts. “This would be substantially below the five-year average of 86 Bcf and would reduce the storage surplus to just 106 Bcf by the end of July.”

Inventories now stand at 2,973 Bcf and are 299 Bcf less than last year and 141 Bcf greater than the five-year average. In the East Region 21 Bcf was injected, and the Midwest Region saw inventories rise by 14 Bcf. Stocks in the Mountain Region were up by 1 Bcf and the Pacific Region was unchanged. The South Central Region fell by 8 Bcf.

Declines were particularly deep in the Northeast, averaging a half-dollar or more, and the NGI National Spot Gas Average dropped 14 cents to $2.78.

Futures traders took heed of the falling cash and sent prices scurrying back below $3. At the close August had fallen 7.3 cents to $2.970 and September was off 7.2 cents to $2.961.

New England prices took a big hit as current 90 degree readings were expected to fall to as much as 10 degrees below normal by Monday. Forecasters predicted Boston’s Friday high of 90 would ease to 85 Saturday and by Monday be sitting at 71, 11 degrees below normal. New York City’s Friday high of 91 was seen holding Saturday before easing to 86 Monday, 2 degrees above normal. Chicago’s 88 high Friday was expected to hold Saturday before dropping to 75 Monday, 9 degrees less than normal.

Declines at other market points were equally robust. Gas at the Chicago Citygate retreated 14 cents to $2.88 and packages at the Henry Hub were quoted 7 cents lower at $3.03. Deliveries to El Paso Permian came in a dime lower at $2.65.

AccuWeather.com meteorologists predicted a significant cooling trend for major markets. “Cooler air will settle southward across part of the central and eastern United States by early next week and will trim the extent of the most recent heat wave.

“While steamy air will hold on indefinitely over much of the southern Plains and Southeast, some relief from 90- and 100-degree Fahrenheit air is on the way for parts of the central Plains, Ohio Valley, Mid-Atlantic and southern New England,” said AccuWeather Senior Meteorologist Brett Anderson.

“Factoring in the late-July sun, it will still be hot and rather humid, just not as extreme,” Anderson said. “This part of July is about as hot as it gets, on average, so dramatic cooling and a great reduction in humidity is rare in the Central and Eastern states.”

Traders are short-term bearish but long-term bullish. “I scale up sold between $3.06 to $3.12 and am now short,” said Alan Harry, trader and principal with Harry’s RE Trust in New York.

“The reason I got short was the buying had stopped and we were sitting up there with no new news and it felt like a natural sell.

“I’m very bullish on natural gas and I think this is the last sell off. I’m a buyer between $2.90 and $2.82. The reason I am so bullish on natural gas is we have a problem with how much gas is coming into the marketplace. We won’t be filling up storage enough by the time November rolls around to satisfy the speculators.”

Weather forecasts were tempered based on overnight data. “[Friday’s] six- to 10-day period forecast is generally cooler than yesterday’s forecast, except across Texas and the southern U.S.,” said WSI Corp. in its morning report to clients. Continental United States population-weighted cooling degree days (CDD) “are down 2.7 to 59.8 for the period, which are 4.8 above average.

WSI says there are risks in either direction at this point. The South-central U.S,. including ERCOT could run a bit hotter based on the ECMWF [European] guidance, it said.

Analysts who missed Thursday’s storage build might want to look closely at power burn. Industry consultant Genscape Inc., noting Thursday’s thin storage build of 28 Bcf, commented that “relative to last week, total power generation grew about 27 AGWH (average gigawatt hours) driven by an increase of +6 CDDs as well as the impact of the July 4th holiday in the prior week. Almost all of the increase in gen is coming from thermal sources (gas and coal), as overall generation from renewables remained relatively flat (wind generation increased about 2.7 AGWH week/week while collectively hydro and solar generation fell by about that same amount as hydro continues seasonal declines).

Gas burn and coal accounted for +16 and +10 AGWH of generation respectively with the total week/week increase in gas burn totaling about 22.3 Bcf, Genscape said.

Other traders are looking to play the market strictly from the long side, although are currently standing aside. “We have suggested a shift to the sidelines and off of a bullish stance for now but will look to re-establish longs into the September contract on a further price decline into the $2.92-2.95 zone,” said Jim Ritterbusch of Ritterbusch and Associates in a morning note to clients. “We viewed yesterday’s storage injection as bullish and we see another two to three weeks of surplus contraction per the EIA releases. And although the weather factor will begin to diminish in importance next month, we feel that a broad-based sustainable hot spell could reduce supply overhang to less than 100 Bcf in keeping the market highly sensitive to any unexpected supply disruptions prompted by tropical storm activity or pipeline issues.

“But from a longer term perspective, we are still having difficulty constructing a scenario that would push values much more than 20 cents from current levels in either direction even when extending a view out through the end of next month.”