Nearly every major natural gas play in the United States makes money at prices above $4.00/Mcf, and more important, can generate a “decent rate of return” at prices above $4.25, according to an analysis by Raymond James & Associates Inc. 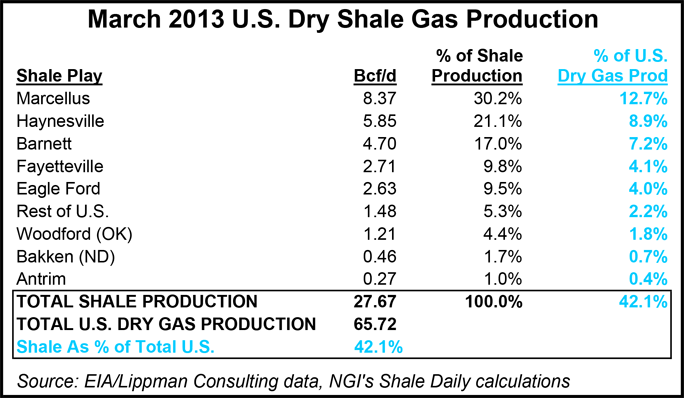 In a note to clients on Monday, J. Marshall Adkins and his team broke down the aggregated cost data of more than 50 independents and major exploration and production (E&P) companies using “presentations, transcripts, press releases and discussions with management,” with a specific focus on plays that “meaningfully contribute” to U.S. supply and growth, and with at least 40% gas by volume.

Raymond James analysts “built normalized type curves for each play and built out a revenue stream based upon static gas prices at each level,” Adkins noted. “On the cost side, we took the most recent information on drilling and completion costs (three-to-six-month data lag), royalties and production taxes, and average lifting costs,” or lease operating expenses (LOE). To adjust for varying corporate tax rates, breakeven prices using pre-tax values were calculated.

As to what constitutes “breakeven” costs, it depends whether an E&P uses full-cycle economics or marginal costs, which exclude some of the fixed costs. “The reality is that everyone will give a different answer depending on their interpretation of costs,” Adkins noted.

Based on his analysis, “we believe companies will continue to focus on oil drilling if their portfolio allows, followed by gas plays that have a high liquids content. Oil remains king for now as E&P companies will need materially lower oil prices or higher gas prices for natural gas plays to heat up.”

The best returns for gas drillers generally are in the Marcellus and Eagle Ford shales, and the Granite Wash formation, according to Raymond James.

“The Marcellus takes the cake on being the most profitable across its different windows, largely as a result of the high quality shale rock and the lower well costs,” as well as zero Pennsylvania production taxes. “In addition, the more profitable Marcellus windows (super rich, southwestern wet) are getting an uplift from their high liquids content, the same benefit that makes the Eagle Ford and Granite Wash some of the most profitable gas plays as well.”

There are “clearly great returns” to be made drilling gassy wells in today’s price environment, but E&Ps “are going to direct their drilling dollars to the areas that provide the greatest returns right now. Today, that is the ‘oily plays…In other words, most oil plays today are still more profitable than the dry gas plays, so they will attract the most drilling dollars.”

Another impediment for gas drillers is a lack of infrastructure, Adkins noted. “The Marcellus, for example, is one of the most profitable shale plays that has attracted an incredible volume of drilling in the last few years. Unfortunately, this surge in drilling has been coupled with a lack of infrastructure build out that has led to a backlog of 1,000-plus uncompleted wells.

“That inventory alone raises eyebrows and paints a pretty clear picture of why there is no hurry to pour more gas drilling budgets into plays where cash flows may be delayed. The bottom line is that any meaningful increase in gas-directed drilling activity will occur only after oil drilling economics deteriorate and gas infrastructure constraints are alleviated.”

Oil and natural gas liquids still “make up the majority of top line revenues,” with liquids providing more than half of the revenue in many of the most economic gas areas, Adkins noted. “Four of the lowest breakeven gas prices are in plays that have a significant liquids production mix, with the Marcellus having the lowest breakeven for a dry gas pure play. For comparison, we calculate a breakeven price for the southwest Marcellus super-rich fairway around 15 cents/Mcf and the wet gas acreage at $1.33, while southwest dry acreage is breakeven at $2.33 and the northeast at $2.56.

“The Eagle Ford wet gas plays are profitable just under $1.00/Mcf, while its dry acreage isn’t breakeven until gas is closer to $4.00.” As long as West Texas Intermediate crude oil prices are $80-$90/bbl, and Henry Hub “stays below $5.00, we see liquids continuing to take a larger piece of the pie for natgas drillers.”

Analysts at Wells Fargo Securities LLC said last Friday “maybe $4.00 is the answer to the official question of 2012: ‘what price would make you return to gas plays?'” Analysts David Tameron and Gordon Douthat said the “three standard responses” from E&Ps over the last year were: “It really depends on the price of oil and natural gas liquids, and what our returns are in the liquids plays; It would probably take $5.00 or higher; or No gas price would make us return.”

However, “as front month gas prices have been able to hold the $4.00 mark pretty well since early April, we have seen some signs that maybe there is a magic number and perhaps it is closer to $4.00,” said the duo. WPX, they noted, “is just one anecdote, but perhaps the proof will show up in the rig count and production data.”

On Monday Navigant issued its spring North American gas market outlook, which indicated that the “real Henry Hub average price” would increase at an average rate of 2.9%, from $3.66/MMBtu this year, to $4.07 by 2015 and $6.82 by 2035. Domestic gas demand also is expected to increase to 89 Bcf/d by 2035 from 71.2 Bcf/d in 2013 primarily because of industrial growth in the near-term and power generation increases over the longer term.

“High rates of supply growth are still evident in the market, which is somewhat surprising considering the relative flat growth in recent baseload demand,” said Navigant’s Gordon Pickering, who authored the outlook. “Given this market, and relatively low prices, we expect a near-term resurgence in demand led by the industrial sector, with additional growth extending for the full term of the forecast.”