As expected, forecasts of moderate weather in most of the East, Pacific Northwest and West Coast along with the extra loss of industrial demand that accompanies a holiday weekend caused prices to range from flat to nearly 35 cents lower at most points Friday. Several scattered gains of up to about C15 cents kept mixed price movement in play as many traders made the customary early holiday-related exits from their offices.

The Rockies, which had been recovering from major early-week softness in the previous two days, saw most of the remaining constraints on takeaway capacity being removed Friday but still succumbed to the overall softness. Indeed, some of Friday’s biggest drops occurred at Rockies points, and most averaged less than $2.

Traders could return to their offices Tuesday to find a tropical storm poised to enter the Gulf of Mexico (or possibly already there). After sending hurricane hunter aircraft to check out a tropical wave and associated low-pressure east of the Windward Islands (lower half of the chain between Puerto Rico and Venezuela), the National Hurricane Center (NHC) made it official late Friday afternoon: Tropical Depression Six (TD6) had formed. At 5 p.m. AST Friday the center of TD6 was about 180 miles east-southeast of the Windwards and moving westward at nearly 16 mph, NHC said. On that track the depression would be passing through the islands sometime early Saturday, it added. Maximum sustained winds were near 36 mph, and TD6 had the potential for becoming Tropical Storm Felix on Saturday, NHC said.

Despite PG&E lifting a low-inventory OFO Saturday, the PG&E citygate was able to realize a gain of nearly a dime. However, Malin fell about 15 cents.

And although Florida Gas Transmission ended an Overage Alert Day Friday, the Florida citygate rose a little more than a nickel and Florida Gas Zones 1, 2 and 3 in the production area recorded small gains of up to a nickel.

Cold fronts were expected to keep power generation load modest during the weekend in the Northeast and Midwest and limited in the South. Inland California and the desert Southwest would remain the only substantive “hot spots” in the U.S. during the holiday period.

A marketer in the Upper Midwest was unaware of any reason for Dawn and Michigan citygate gains of about a nickel each, particularly since her company wasn’t buying any spot gas Friday. It certainly wasn’t weather-related, she said, because the area was expected to see “beautiful” weekend conditions. Maybe there were people who still have storage injection capacity open and saw recent price softness as an opportunity for bargain hunting, she suggested.

A utility buyer in the western reaches of the Midwest also reported nice weather, adding that he had been leaving windows at his house open at night in the past three to four days. Forecasts called for highs not getting above the mid 80s this week, he said, which should keep regional gas demand muted. He put little store in the potential price rallying effect of the tropical wave (not yet classified as a depression at that point) approaching the eastern end of the Caribbean, saying that even if it did become a tropical depression or even tropical storm, “I think it will be a rain event for Mexico” and a nonevent for the U.S. gas market.

With September bidweek out of the way, the buyer said he was already working on October baseload plans Friday. “I also have some lines in the water” for October-March winter term supplies, he added.

Drilling rigs targeted at finding natural gas in the U.S. took a big jump of 29 during the week ending Aug. 31, according to the Baker Hughes Rotary Rig Count (https://intelligencepress.com/features/bakerhughes/). Its onshore tally accounted for most of the increase by rising 26 rigs, while three were added in the Gulf of Mexico, Baker Hughes said. 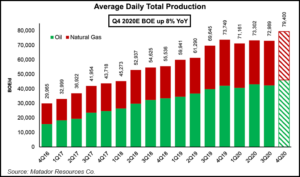 Dallas-based independent Matador Resources Co., in sync with its midstream affiliate, pulled out all stops in the third quarter by reducing costs at a record rate while it boosted its oil and natural gas production. The portfolio stretches across oil- and natural gas-rich basins of Louisiana and Texas, but operations primarily are directed to the…