Prices remained mixed in most of the market Thursday, with a majority of points either flat or moving only small amounts up or down. The much-cooled-down Northeast citygates were an exception in recording double-digit losses across the board.

A second straight day of little price change in most cases had traders commenting on how the market seems to be settling into a doldrums period after the brief excitement stirred by Tropical Storm Arlene and a mini-heat wave. However, one pointed out that above normal temperatures are due again next week over a large central portion of the U.S. that includes the Midwest and a big section of the Northeast, which could get prices on the move again.

Most current air conditioning load remains concentrated from the Southeast through Texas and Oklahoma into the desert Southwest. After starting the week with considerable heat levels, the Midwest and Northeast now are barely getting above the 70s for daily high temperatures. And a Pacific storm was making sure that northern parts of the West stay below normal for a while longer.

The Energy Information Administration estimated a storage injection of 73 Bcf for the week ending June 10, which was considered moderately bullish because the volume was near the lower end of prior expectations and because it bit 22 Bcf chunks off the current surpluses to year-ago and five-year average inventory levels. Nymex traders responded by sending July futures up 17.2 cents on the day.

Ron Denhardt of Massachusetts-based Strategic Energy & Economic Research said, “The low storage injection suggests that higher temperatures are going to reduce injections more than historically, and thus the supply-demand balance could be quite tight this summer. This is only one observation, but the low storage injection level, along with a sharp increase in oil prices, is very bullish for gas.”

Two succeeding days of screen strength made calling the Friday market’s direction a toss-up. Futures support for higher prices is substantial and the relatively low storage build adds modestly to a bullish mentality. But the erosion of air conditioning demand in key market areas and the weekend slump in industrial load will try to tug quotes lower.

A high-linepack OFO by PG&E had little negative impact on western prices. In fact, Malin and the PG&E citygate managed gains of 2-3 cents despite the OFO. A larger price depressant may loom in Friday’s trading for the weekend as a total outage of El Paso’s San Juan Crossover (base capacity of 640 MMcf/d) is due to end Saturday, freeing up a lot of constricted supplies.

“It’s amazing how quiet the Rockies market has gotten lately,” said a marketer in the region. There hasn’t been much to push prices much in one way or the other for a while, he added.

A utility buyer in the Lower Midwest said his area has cooled off to the extent that the company had little electric load left. That may change as high temperatures warm up into the low 90s over the weekend, he said. 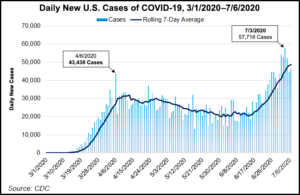 Though months have passed since the coronavirus pandemic first began to impact individuals and communities across the United States, many organizations have proven their determination by continuing to assist however they can. While many countries are emerging from lockdowns and showing signs of recovery, Royal Dutch Shell plc continues to assist in the global fight…