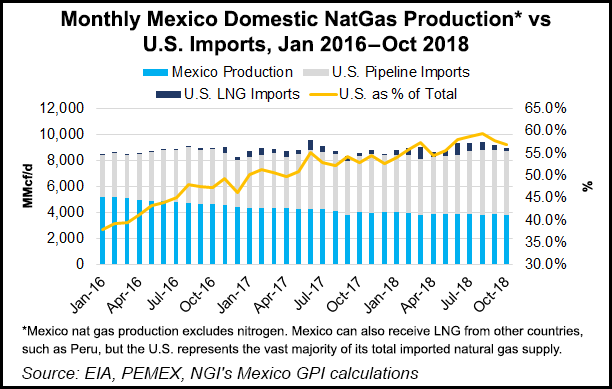 While Mexico’s 3P (proved, probable and possible) reserves measured so far are mostly found in shallow water and conventional onshore plays, a far greater quantity of prospective resources are thought to be contained in deepwater and unconventional formations.

“I think that one of the things that concerns us, and this is derived largely from the history of Mexican oil, is whether privileging short-term opportunities might end up hurting long-term ones,” Zárate said.

The projections, which Pemex published in December as part of the unveiling of President Andrés Manuel López Obrador’s 2018-2024 exploration and production (E&P) strategy, list a production goal of 2.65 million b/d by year-end 2024, up from 1.7 million b/d last November.

Although López Obrador and Pemex CEO Octavio Romero Oropeza have since lowered the target to 2.4 million b/d, the Pemex figures nonetheless offer insight into how it plans to achieve its goals, which also include a 50% increase in natural gas output over the same span, to 5.64 Bcf/d from 3.76 Bcf/d currently.

While Romero Oropeza has pledged that the accelerated development of 20 fields — 16 shallow water and four onshore — will add 73,000 b/d of new production by end-2019, “the incremental effect” will stabilize starting from 2020, Pulso Energético said.

The 50% increase in natural gas output will come “principally as a result of increased oil production,” Romero said.

However, according to Zárate, it would be ideal for Pemex to follow the lead of other national oil companies (NOC) that have increasingly been investing in non-associated gas plays.

“I think there’s a very clear consensus among analysts that one of the big challenges that Mexico faces is on the natural gas front,” Zarate said. “And we have not yet seen something that looks like a cohesive natural gas strategy.”

Amid declining gas production in Mexico, gas exports from the United States were estimated to have surpassed 5 Bcf/d as of last Tuesday (Jan. 8), the first time since early November, according to Genscape Inc. senior natural gas analyst Rick Margolin.

However, Zárate said, gas producers in Mexico, including Pemex and independent operators, must compete with drillers in the United States, which is the world’s most competitive gas market.

Budget constraints have also hindered Pemex’s ability to invest in non-associated gas E&P, which for now is a far less profitable business than crude oil for the NOC.

Pemex’s budget “shows a significant increase from what we saw last year, which is obviously a good thing if you want to reverse [the declining] trend in production that we’ve seen in Mexico over the last decade or so,” said Zárate.

“That said, we also have to compare those numbers to the investment figures in 2013 and 2014, and back then the numbers were significantly higher.”

Gross natural gas production in Mexico has fallen by about 42% since peaking at 6.52 Bcf/d in 2009, according to Pemex data.