Nearly all of the curtailed U.S. onshore oil volumes shut-in as Covid-19 hampered demand are set to return by the end of the third quarter amid stronger oil prices and a generally brighter market outlook, according to a new analysis by Rystad Energy. 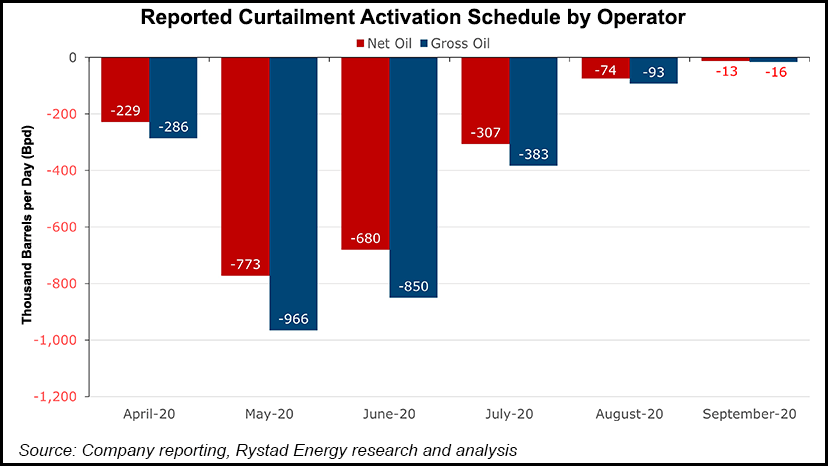 The Oslo-based consultancy analyzed the curtailment reactivation schedules of 25 publicly traded oil operators using their second quarter earnings statements. Researchers found that total net curtailments peaked at 772,500 b/d in May, before dropping to 680,300 b/d in June and 306,500 b/d in July.

The curtailed volumes are scheduled to decline to 73,300 b/d in August, with nearly all production poised to be reactivated by September.

“The cuts monitored in the sample group were implemented mostly in April and May, and were entirely driven by economic and technical considerations, with operators shutting in lower margin wells while reducing flowback on others,” said the Rystad team led by Veronika Akulinitseva.

“Nearly all operators said they did not face any issues bringing volumes back online as per schedule, as they had already worked on issues such as maintaining reservoir pressure and well integrity even before they began moderating output or shutting in wells.”

There are some exceptions, however, to the reactivation trend, namely by two huge Lower 48 independents: EOG Resources Inc. and Pioneer Natural Resources Co.

EOG is maintaining about 25,000 b/d of cuts until September, “but the company noted curtailed volumes are being restored faster than originally anticipated,” the Rystad team said.

EOG reported that nearly all reactivated wells showed a degree of flush production, which Schlumberger Ltd. defines as “a high flow rate reached with a new well.” This trend helped the Houston-based operator beat its second quarter production guidance, according to Rystad.

Pioneer management, meanwhile, said it plans to keep about 6,000 b/d of 7,000 b/d curtailed volumes offline until prices improve, citing that most of these volumes are from its higher-cost vertical wells.

Oasis Petroleum Inc. and Matador Resources Co. also each plan to keep about 15% of their curtailed volumes offline until September, researchers said.

When prices started improving in June, only a few operators, including ConocoPhillips, Chevron Corp. and Noble Energy Inc., deepened their cuts, Rystad noted.

However, ConocoPhillips plans to return all shut-in volumes by the end of September, and Chevron pegged the end of August to ramp up the curtailments. Most of Noble’s cuts were back online by the end of July.

Although curtailed output is returning, drilling remains in the doldrums, with the combined North American rig count standing at 298 as of Friday, down from 1,077 at the same time last year, according to Baker Hughes Co.

Permitting for new wells showed a 25% sequential uptick in July, however, driven by growth in the Permian Basin.