Permits to drill using hydraulic fracturing (fracking) are not growing at an unprecedented rate in California, contrary to reports last week by state officials in explaining the ouster of the oil and gas supervisor. 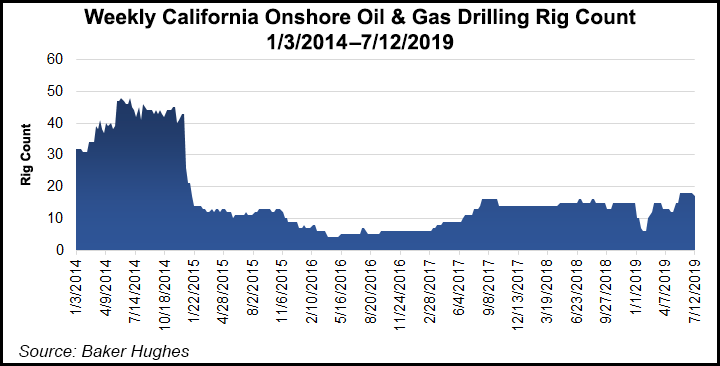 Most of the permits issued by the Division of Oil, Gas and Geothermal Resources (DOGGR) were for “reworking, plugging or re-plugging of wells,” Deputy Secretary Lisa Lien-Mager told NGI’s Shale Daily. Of the 2,365 permits approved since early January, only 211 were to use fracking as part of the drilling process, according to online data.

All employees and contractors at DOGGR who own oil and gas stocks have been banned from participating in permitting decisions or oversight functions until they undergo individual conflict-of-interest reviews based on new rules that the Department of Conservation (DOC) is developing.

DOC plans to continue “at full pace” an investigation underway, according to Newsom’s Chief of Staff Ann O’Leary. It is focused on allegations that more than a dozen DOGGR employees have financial stakes in oil and gas companies that “could constitute actual or apparent interest conflicts.” As a result, DOC is supposed to “take the maximum disciplinary action appropriate under law,” O’Leary said.

“Our industry produces energy under the toughest environmental, health and safety standards in the world,” said Western States Petroleum Association President Catherine Reheis-Boyd. “As important as oil and gas production is to our state’s energy future and the communities in which we operate, all involved should be held to the highest standards of conduct.”

Chief DOC Deputy Director Jason Marshall was named acting head of DOGGR, and he wasted no time in issuing an order for Chevron Corp., which has been allegedly slow at remediating water and/or oil flows at well sites. The surface expressions typically occur during oil extraction.

“The condition typically is associated with extractions using high-energy steam injection in brittle geologic formations like the ones found in north Santa Barbara County and on the southwest end of the San Joaquin Valley,” said DOGGR spokesperson Don Drysdale. “This is not leaking pipes.”

Marshall last Friday ordered Chevron to immediately take action to stop current flows and prevent new ones. He also requested the company meet with the state agency’s technical team and submit data to DOGGR supporting the root cause analysis issued in June.