Propelled by rising activity in the Gulf of Mexico (GOM) amid the recovery from Hurricane Ida-related impacts, the U.S. rig count rose nine units to 521 for the week ended Friday (Sept. 24), according to Baker Hughes Co. (BKR). 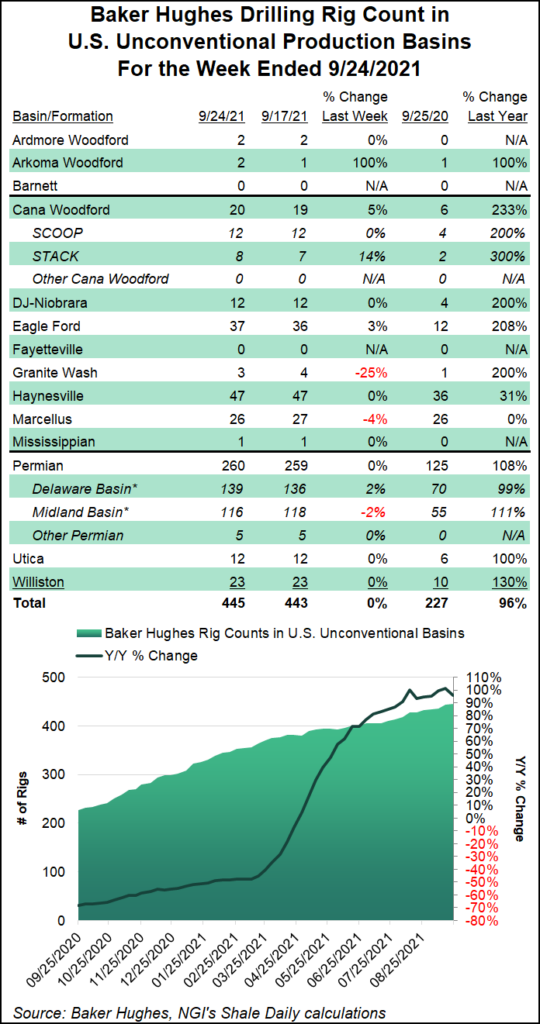 Ten oil-directed rigs were added in the United States for the week, offsetting a one-rig decline in natural gas drilling. GOM activity increased by four units for the period, with four rigs added on land and one in inland waters, according to the BKR figures, which are based partly on data from Enverus.

The GOM rig count had dropped to zero in the immediate aftermath of Ida, which made landfall over Louisiana late last month.

The Canadian rig count rose eight units to reach 162 as of Friday, up from 71 a year earlier. Canada added six natural gas-directed rigs, along with one oil-directed rig and one miscellaneous unit.

Broken down by major play, week/week changes were mixed. The Permian Basin added one rig for the period, as did the Arkoma Woodford, the Cana Woodford and the Eagle Ford Shale. The Granite Wash and the Marcellus Shale each dropped one rig from their respective totals.

In the state-by-state breakdown, Louisiana and Oklahoma each added four rigs, while Texas saw its count climb by three. Utah saw a net decline of one rig for the week.