An independent California-based geologist who has studied the Monterey Shale thinks it could eventually fulfill some of the hype surrounding its long-term reserves, but first it is going to take more serious geologic study and some small operators willing to take the risks that the big companies are not going to take. 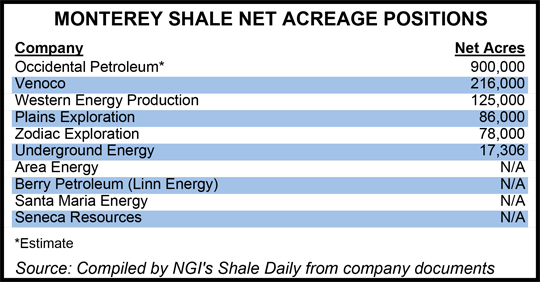 “I’m optimistic, but with some caution attached to it,” said Donald Clarke, an independent Los Angeles-based geologist who has been quoted extensively by the American Association of Petroleum Geologists (AAPG) publication, which looked last fall at the Monterey’s potential to see if it would be a “boom or bust,” following federal government projections for up to 15.5 billion bbl of reserves.

Before any of this vast potential is realized, “we have to have a much better understanding of what is going on there [geologically],” Clarke said. “There is a lot of more science we need to gather.”

When, not if, the huge potential play is unlocked, it won’t be done by one of the majors or Los Angeles-based Occidental Petroleum Corp., which has the biggest land holdings in the Monterey, he said.

“When you get down to it, a lot of big companies made money in the past, they were actually spending money on the research and doing the stuff. There are huge risks involved now. ExxonMobil doesn’t do risky things.

“But they instead let the little guy do it, and 10 little guys may fail, but one makes it, so then the big guy can come in and buy the little guy’s share. That scenario is very common in the industry and has happened for a number of years. The real oil finders are not the big companies, but the little guys that go out and take the risk.”

Clarke characterizes the risks in the developing the Monterey as “very big.”

Clarke said he has had to try to convince several unnamed big companies that they should take the risk, but all of them have rejected him and some of his other fellow geologists.

“They look at it this way: they can drill an infill well in an existing oilfield and that will cost two or three million dollars,” Clarke said. “Instead, people touting the Monterey are asking the big guys to spend $25 million and an expensive hydraulic fracturing [frack] job that will add several million dollars of cost to it. Which would you choose?”

For Clarke, with all its potential, the Monterey is still basically a “wildcatter’s play.”