It would appear that Sam Houston was right when he said, “Texas has yet to learn submission to any oppression, come from what source it may.” 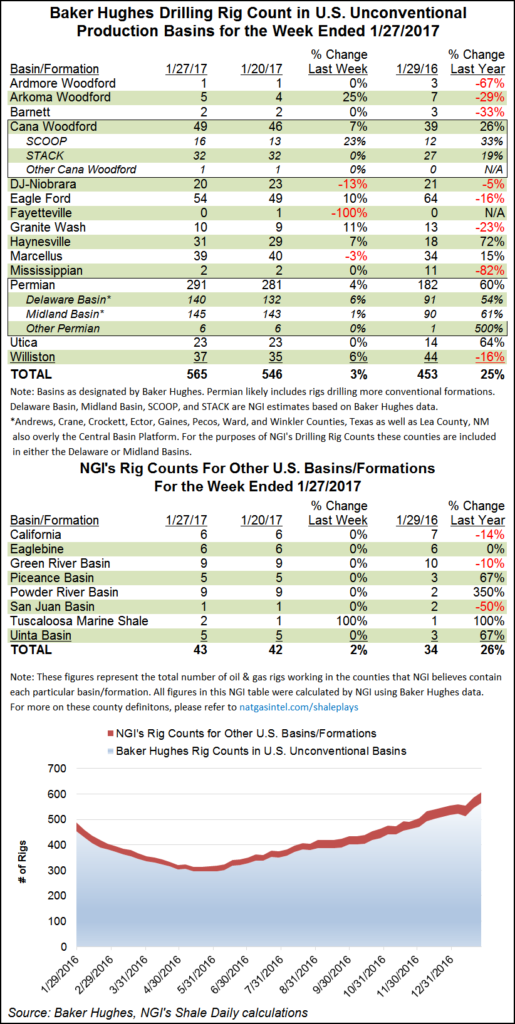 The Lone Star State’s upstream oil/natural gas industry continued to climb out of the price crash abyss during the week, adding nine rigs to end at 351 active, according to Baker Hughes Inc.’s latest rig count for the week ending Jan. 27.

Again, it was almost all about the Permian, which West Texas shares with New Mexico. The Permian gained 10 rigs to end at 291, well above its year-ago level of 182. Even the Eagle Ford Shale — which has been out of favor lately — added five rigs, bringing its tally to 54, which is still down 10 from a year ago. Two rigs were running in the Barnett Shale, the same as a week ago. One year ago Texas was running 281 rigs.

The “bloodbath” is over, Texas economist Karr Ingham said in his latest Texas Petro Index report. “It is good news for the industry, for the Texas economy, and for many communities around the state that are strongly connected to the oil and gas exploration and production industry.”

More rigs went up during the week around the country as well. Oklahoma added five, New Mexico gained four, and Louisiana saw the return of two rigs. Three left Colorado, the biggest loser among states for the week.

Canada added three rigs, after a couple weeks of robust gains, to end at 345 active. The North American count increased by 21 to end at 1,057, well above the 850 rigs running one year ago.