The multiple polar vortices and stubbornly cold weather that has dominated winter weather this year will have another impact even as temperatures turn warmer: higher bills for natural gas and electric utility customers. 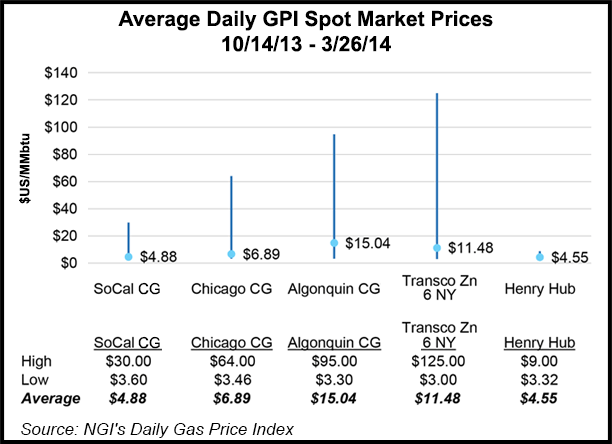 Amidst the cold, much focus was cast on skyrocketing energy commodity prices. In late January, Federal Energy Regulatory Commission (FERC) Acting Chairman Cheryl LaFleur said FERC was keeping its eyes on infrastructure and on the markets — but said natural gas and electricity price spikes brought on by record cold were a sign that the markets were actually working (see Daily GPI, Jan. 28). Last month the Commission said it will hold a technical conference on Tuesday (April 1) to evaluate the U.S. electric grid’s performance and review interaction between the natural gas and electricity markets (see Daily GPI, Feb. 20).

While the markets might be working, some utility customers are expected to feel the pinch in their wallets in the coming months.

Akron, OH-based FirstEnergy Solutions is planning a one-time $5.00-15.00 surcharge on the June bills for nearly 900,000 gas and electric customers in northern Illinois to cover a portion of the costs it incurred purchasing higher priced electricity from PJM Interconnection during the polar vortex.

PJM Interconnection, the electricity grid operator for more than 61 million people in 13 states and the District of Columbia, in January experienced eight of the 10 highest winter demand days for electricity in its nearly 87-year history and had an all-time winter peak of 141,312 MW on January 7.

“FirstEnergy Solutions will be passing through an ancillary charge that we received from PJM ,” FirstEnergy spokeswoman Diane Francis told NGI. The amount of that charge in January “was significant,” but hasn’t been finalized by PJM, she said. “PJM still has to go through a reconciliation process, so we probably won’t actually know the amount of each customer’s charge until April, and then we’ll bill them in June.”

Chicago-based Nordic Energy, an independently owned company that supplies both natural gas and electricity in Illinois and six other states, is also reportedly billing higher than expected rates due to the polar vortex.

In New England, Northeast Utilities is the largest utility system, serving more than 3.6 million gas and electric customers in Connecticut, Massachusetts and New Hampshire through affiliates that include Connecticut Light & Power, NStar Electric & Gas and Yankee Gas Services Co. Like so many of FirstEnergy Corp.’s electric distribution companies, they are regulated and, therefore, their hands are tied when it comes to passing through higher costs to customers.

“Our customers will be largely insulated from the natural gas price fluctuations we saw this winter in the New England market,” a Northeast Utilities spokesman told NGI. “We have a combination of local supplies in storage that we purchase in the offseason, long-term contracts and pipeline capacity that comes from the Gulf region which makes up our supply. For forecasting purposes, we plan for colder-than-normal temperatures and refill our supplies in storage with natural gas purchased in the off season, as we do every year when the cost is lower for our customers.”

But that was only a temporary reprieve for National Grid customers, who will have to cover those higher costs in bills they pay over the next few months.

And smaller, nonregulated companies have been sending out unusually high bills to customers across New England and the Midwest. Customers of Central Hudson Gas & Electric Corp., New York State Electric & Gas Corp., MidAmerican Energy, and others are reported to have seen bills significantly higher than usual.

Since mid-October, next-day natural gas prices in New England have averaged more than $10.00/MMBtu, with the Algonquin Citygate and Transco Zn 6 NY indexes averaging $15.04 and $11.48, respectively, according to Patrick Rau, NGI director of strategy and research. Gas traded on January 21 on Transco Zn 6 New York reached an all-time high of $125.00/MMBtu, according to NGI’s Daily Gas Price Indexes.

“Those high prices reflect the overall lack of capacity to serve peak winter demand days in New England, although Texas Eastern helped ease the situation somewhat in New York City with its New Jersey-New York expansion, which went into service in November,” Rau said. “Of course, those are wholesale prices, and do not include any markup that would ultimately be passed along to tariff gas customers behind the various local distribution systems that serve these areas.”

January’s brutal, polar vortex-addled weather drove the country’s natural gas consumption to a record for a single month: nearly 3.2 Tcf (see Daily GPI, March 13). January 7 was the highest consumption day ever seen at about 139 Bcf. Over the past five years or so, a strong demand day during winter’s peak month has typically been about 110 Bcf.

The number of recorded heating degree days has been driven to unusual highs, according to National Oceanic and Atmospheric Administration data (see Daily GPI, Feb. 6).

FERC in February invoked for the first time its emergency authority under the Interstate Commerce Act to help alleviate “dangerously low” propane supplies in the Midwest and Northeast (see Daily GPI, Feb. 11; Feb. 10).

The heavy pull on natural gas and gas storage caused by extended extreme cold across much of the northern part of the United States and Canada prompted the California Independent System Operator (CAISO) last month to issue a conservation alert because of a shortage of gas supplies that underpin much of the state’s power generation (see Daily GPI, Feb. 7). CAISO said there were constraints on natural gas supplies coming from the Southwest, the Rockies and Canada.