Bolstered by increased oil drilling, particularly in the Permian Basin, the U.S. rig count climbed for a sixth straight week during the period ended Friday (Oct. 23), picking up five units to reach 287, according to the latest data from Baker Hughes Co. (BKR). 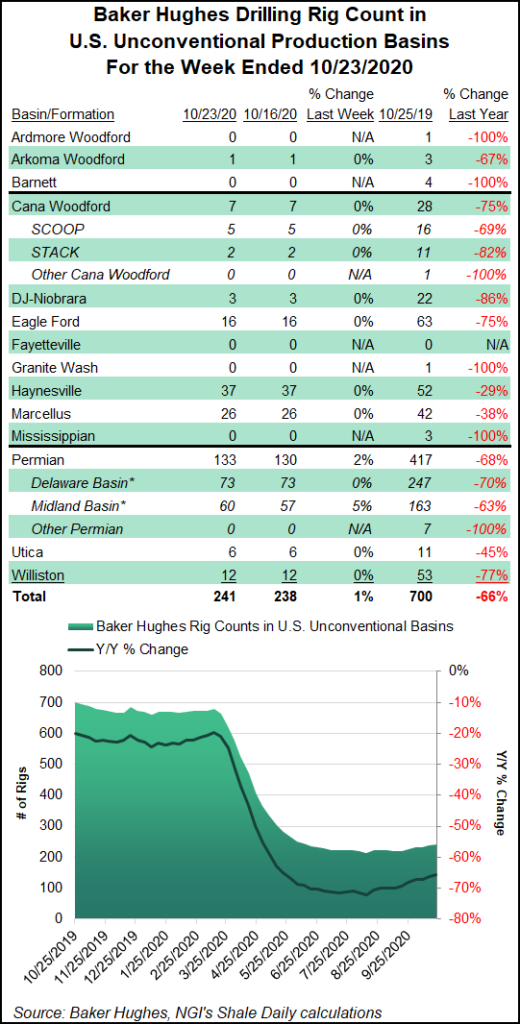 Land drilling increased by six units in the United States, while the Gulf of Mexico saw one rig exit to fall to 13 for the week. Horizontal units increased by five, while the total number of directional and vertical rigs remained unchanged.

The Canadian rig count climbed three units to 83 for the week, with two oil rigs and one natural gas rig returning to action. The Canadian count finished 64 units behind year-ago levels.

The North American rig count ended the week at 370, off 607 from the 977 active units at this time last year, BKR data show.

Among major plays, BKR’s breakdown showed all the notable action occurring in the Permian, which picked up three rigs for the week to up its total to 133. That’s still a far cry from the 417 rigs running in the West Texas and southeastern New Mexico play at this time last year.

Broken down by state, Texas added two rigs for the week, while Oklahoma and Alaska each added one, according to BKR data. Louisiana dropped one rig week/week.

It was a week that saw major developments on the mergers and acquisitions front in the Permian.

ConocoPhillips announced it is taking over Concho Resources Inc. for $9.7 billion in stock, forming a giant in the Permian that would rival the output of the biggest players in the nation’s most productive oilfield.

Not long after, Pioneer Natural Resources Co. struck a deal valued at $7.6 billion including debt to join forces with rival Parsley Energy Inc.

Meanwhile, EQT Corp., the largest natural gas producer in the Lower 48, announced that it has ended another round of production curtailments.

However, management said it won’t hesitate to continue shutting in volumes as low prices warrant. The Appalachian pure-play had curtailed about 400 MMcf/d beginning Sept. 1, cutting 15 Bcf from third quarter production volumes. The company slowly ramped up early this month, and has since turned online all the volumes. EQT previously curtailed 1 Bcf in May and ended those shut-ins by July, as other operators have throughout the basin this year.