A developer is offering capacity in a new western region natural gas storage project at the same time projects in the Gulf Coast region — the traditional gas supply area — have struggled and storage capacity there has beenunderutilized. 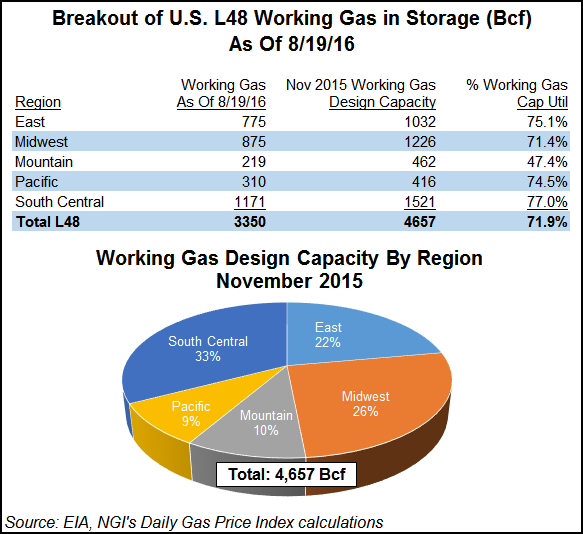 Magnum Gas Storage LLC (MGS) is holding a nonbinding open season through Sept. 30 for Phase I of its storage project to be located in Millard County, UT, near the town of Delta. MGS said it would be the first high-deliverability, multi-cycle natural gas salt cavern facility in the western United States.

“There is little doubt that the western U.S. energy markets are currently undergoing a paradigm shift, resulting in significantly increased market volatility,” said MGS’s Kevin Holder, executive vice president for midstream natural gas. “There are a number of contributing factors, including aggressive solar and wind capacity development in the Western Electricity Coordinating Council, increasingly tighter pipeline balancing requirements and dependability issues with some existing infrastructure, along with new gas-fired generation and coal/nuclear retirements.”

Meanwhile, FERC on Monday vacated a certificate for the proposed Tallulah Gas Storage Project, a salt cavern facility planned for Madison Parish, LA (see Daily GPI, July 5, 2011; Aug. 25, 2010). The project was certificated in 2011 to be placed in service by March 2015. A three-year in-service extension was sought in November 2014, and a one-year extension was granted in February 2015 — to March 18, 2016. No further extension was sought, the Federal Energy Regulatory Commission said [CP10-494].

Separately on Monday, developer D’Lo Gas Storage LLC asked FERC for a two-year extension of the in-service date for its storage project in Mississippi, which was certificated in September 2012 (see Daily GPI, Sept. 10, 2012). “The extension…will grant D’Lo the time that will be needed to complete the construction of the authorized facilities now that market conditions have started to turn more favorable for natural gas storage development,” D’Lo told FERC [CP12-39].

The future of gas storage on the Gulf Coast is seen to be improving as exports of liquefied natural gas (LNG) increase and there is greater demand for regional gas-fired power generators, but real improvement remains to be seen. Sempra Energy is one of the companies watching. “…[W]e actually cut some of [our consultants’] forecasts when we did our own [storage] projections this year,” Sempra CEO Debra Reed said in early August. “They’re projecting that as the LNG facilities come online and as you get more of the coal-to-gas conversion that you’re going to start seeing some storage rate increases occurring. But what we’ve seen in reality is it’s been slower than what their projections have been, so we took a conservative view in our planning.”

The difficulties faced by market-area storage operators in the Gulf Coast during the era of shale gas abundance (see Daily GPI, Oct. 20, 2010) are evidenced by the multiple attempts by Tres Palacios Gas Storage to reduce the certificated capacity at its Gulf area facility and thus reduce cavern lease costs (see Daily GPI, May 16).

Meanwhile in the West, the value of gas storage has only been made more apparent by the shut-in of the huge Aliso Canyon facility (see Daily GPI, Aug. 30).

If it comes to fruition, the MGS project isn’t expected to be online before Aliso’s issues are sorted out. Service from the first phase of the MGS project is slated to begin during the second quarter of 2020, but limited service could be available as early as the third quarter of 2017 depending upon customer interest, MGS said. The approximate three- to four-turn facility is designed to provide a peak deliverability of up to 500,000 Dth/d and a peak injection of up to 360,000 Dth/d.

Based on the current design, Phase I initially would be capable of accepting gas at the Goshen Hub from Kern River Gas Transmission and Questar Gas Pipeline for injections of up to 360,000 Dth/day and for withdrawals of up to 500,000 Dth/day.

MGS is a unit of Magnum Development LLC, a portfolio company of Haddington Ventures LLC. Haddington principals have been involved in the merchant gas storage business since its emergence in the early 1990s.

For information on the MGS project, contact Holder, (214) 300-1876; kholder@westernenergyhub.com.