Natural gas futures were volatile Tuesday given continued noise in the weather models, soft production and near-record export demand. After falling to a $3.889/MMBtu intraday low, the February Nymex gas futures contract popped at midday and settled at $4.052, up 2.6 cents from Monday’s close. March climbed 1.9 cents to $3.894. 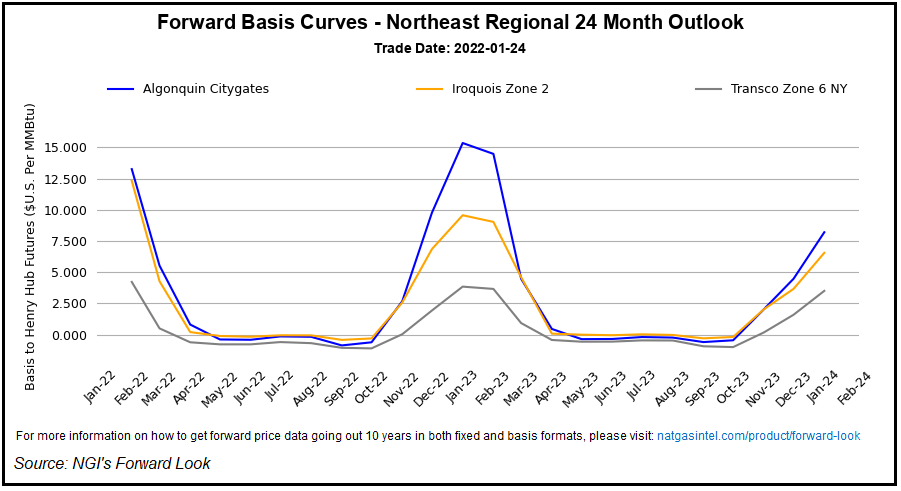 Spot gas prices were mixed amid a brief break from the numbing cold in some parts of the country, but massive, multi-dollar gains in the Northeast lifted NGI’s Spot Gas National Avg. 87.5 cents to $6.535.

Despite a lack of clarity in the long-range weather outlook, there’s no doubt this week is downright bone-chilling across large swaths of the country. More polar air is expected to descend as far south as Texas in the coming days. Furthermore, the National Weather Service (NWS) indicated that the current single-digit temperatures across much of the Plains and into the eastern United States are set to plunge further.

“Sub-zero temperatures will be common across the northern Plains to the upper Midwest through Wednesday morning with wind chills potentially reaching minus 40 degrees,” NWS forecasters said.

The resulting spike in heating demand is driving steep withdrawals from underground storage. Pipelines that include Transcontinental Gas Pipe Line Co., Southern Star Central Gas Pipeline Co., Columbia Gas Transmission and Eastern Gas Transmission and Storage, indicated that cumulative withdrawals over the past week from their systems totaled slightly under 45 Bcf, or about 2 Bcf more than the prior week.

Mobius Risk Group said its sample of facilities that report daily data tallied a week-over-week increase in withdrawal activity of 3 Bcf. As a result, the firm expects Thursday’s Energy Information Administration (EIA) inventory report to deliver a withdrawal “comfortably above the 200 Bcf mark – and potentially as high as 215 Bcf.”

The steep drawdown, coupled with peak cold for the current week still ahead, could be enough to drive the February contract higher through expiration, according to Mobius.

Where prices go from there depends primarily on how long the bitter temperatures stick around. Weather models have yet to provide any clarity, with back and forth within model runs and some divergence among the data sets. As of midday Tuesday, the Global Forecast System trended colder for the Feb. 4-8 period as crisp air over the Northern Plains was set to release south and eastward for a return to strong national demand. However, the European model is not in agreement. It is holding a warm ridge stronger and longer over the southern and eastern United States for more seasonal demand.

NatGasWeather noted that even if the European data flips colder, wild price swings were likely the next few days. The February contract is set to expire, and geopolitical issues are driving a surge in global markets. In addition, inconsistent weather trends are likely to continue in the weather models.

NatGasWeather said it was interested in whether the February 2022 contract would again exeed $4.00 before expiration, “and that appears to be the case.”

For its part, Bespoke Weather Services said there were signals in tropical forcing that would portend warmer February temperatures. However, more consistency is needed in the data to increase its confidence.

Meanwhile, the firm pointed out that production remains well off recent highs amid a slow recovery from pipeline freeze-offs earlier this month. At the same time, more freeze-offs could be on the way given this week’s cold blast.

Should the GFS model reverse again, “prices can bleed a little lower, though the pull on storage means a higher floor than we are used to seeing in late winter,” Bespoke said.

Northeast Cash On A Tear

Though typical this time of year, the extreme volatility in Northeast cash markets on Tuesday may be a precursor to even loftier premiums later this week when the coldest weather hits the region.

Though gains were not as pronounced in New England, prices were even higher. Algonquin Citygate next-day gas averaged $24.615 after rising $3.885 on the day.

AccuWeather forecasters were keeping a close watch on a major winter storm expected to take shape along the Eastern Seaboard this weekend. The storm was expected to quickly intensify off the Atlantic Coast, packing snow and wind on its backside, according to AccuWeather chief meteorologist Bernie Rayno.

“This could be a huge snowstorm for New England,” he said. There is a potential for six inches of snow or more for locations farther north along the Eastern Seaboard, with New England facing the highest threat.

AccuWeather forecasters are monitoring the storm’s path and how closely it may hug the coast. A westward shift in the path of as little as 50 miles could result in areas from the Delmarva Peninsula through much of New Jersey and southeastern New York picking up heavy snow and gusty winds. On the other hand, a track 50 miles farther to the east could mean an “all-out blizzard” for Boston and Cape Cod, with very little, if any, snow for the Mid-Atlantic.

“In the immediate wake of the storm, another blast of Arctic air will sweep across the East, and could cause additional impacts such as a rapid freeze-up to wet or slushy surfaces,” AccuWeather said. “The harsh cold could also result in the potential for a frost or freeze-frosts and freezes for areas as far south as Florida.”

For now, prices throughout most of the Southeast remained subdued. Florida Gas Zone 3 spot gas prices slipped 2.0 cents day/day to $4.180. Most locations in Appalachia put up moderate gains, while Texas Eastern M-3, Delivery recovered the prior day’s losses and then some, bumping up $6.870 to average $13.595.

West Coast cash prices were mixed but even with double-digit increases in California, next-day gas remained well below the $5.00 mark.