A continued slide in oil-directed activity helped drop the U.S. rig count another five units to 258 for the week ending Friday (July 10), according to the latest figures from Baker Hughes Co. (BKR). 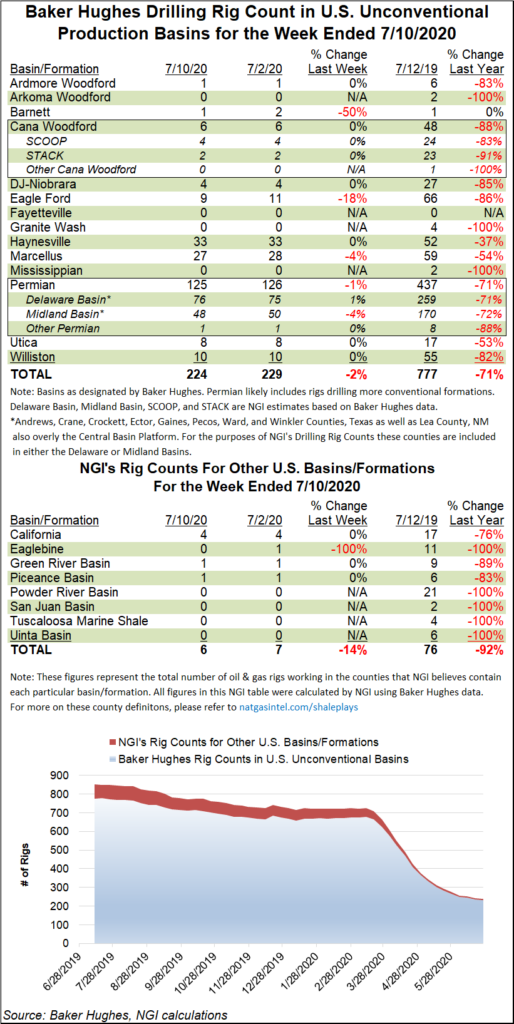 Four oil-directed rigs, along with one natural gas-directed, exited the United States during the period, putting the overall domestic tally 700 units behind the 958 active rigs at this time a year ago. BKR’s U.S. tally has now tumbled 535 rigs since mid-March.

All of the week’s declines occurred on land, with the Gulf of Mexico unchanged week/week at 12 rigs. Six horizontal units and one directional unit exited for the week, partially offset by the addition of two vertical units, according to BKR.

Meanwhile, Canada added eight rigs on the week, all gas-directed, to increase its total to 26. That’s well shy of the 117 units active in the year-ago period.

The combined North American rig count finished at 284, down from 1,075 a year ago.

Among major plays, the Eagle Ford Shale saw the largest net change on the week, dropping two rigs to fall to just nine active units. That’s compared with 66 rigs in the year-ago period. Elsewhere among plays, the Barnett Shale, the Marcellus Shale and the Permian Basin each dropped one rig from their respective totals.

Among states, Texas saw a net decline of five rigs overall on the week, falling to 107 active units, versus 456 a year ago. New Mexico added one rig on the week, while West Virginia dropped one, BKR data show.

As demonstrated by the sharp drop-off in rigs over the past few months, the coronavirus pandemic has taken a heavy toll on U.S. onshore activity. Still, U.S. producers have played a critically important role in rebalancing the global oil market after Covid-19 and will continue to do so going forward, according to Organization of the Petroleum Exporting Countries (OPEC) Secretary General Mohammad Sanusi Barkindo.

Although tensions have long simmered between the Saudi-led cartel and the Lower 48 onshore segment, “there is no objective whatsoever from us as a group or as individual countries to drive U.S. shale production out of business,” Barkindo said in a recent interview with IHS Markit’s Carlos Pascual, senior vice-president.

Meanwhile, Noble Energy Inc. said Thursday the bulk of its shut-in U.S. oil and gas production would be brought back online in the coming weeks.

Noble, whose vast U.S. portfolio extends across Texas and Colorado, said its second quarter curtailments totaled 11,000 b/d of oil. But “significant improvements in operating costs and netback pricing” will allow the company to return the majority of those volumes to sales by the end of July.