An evolving strategic focus on capital discipline by U.S. onshore exploration and production (E&P) companies that began quietly within the last couple of years is expected to become far more widespread in 2018, with nearly half of a sampled group of independent producers — mostly in the Permian Basin — generating free cash flow (FCF) in 2018, according to BTU Analytics. 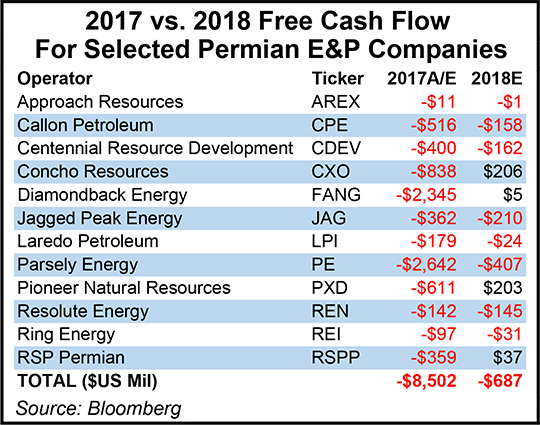 That’s up from just 7% of the 59 E&Ps that BTU sampled that achieved FCF in 2015, senior energy analyst Jake Fells said at a BTU conference last week in Houston.

“In general, we see the industry move toward this focus on cash flow and investor returns,” Fells said.

Over the last decade, as E&Ps rushed to acquire land, prove up resources and sell production, operators were rewarded for their growth in supply. “Especially when oil prices were strong, the market was saying, ”we want you to spend,’” Fells said.

Cumulative outspend for E&Ps sampled by BTU totaled $135 billion from 2013-2017, with producers in the Permian and Northeast leading the way. But those companies were also viewed favorably by the market. From December 2014-February 2017, E&Ps that outspent capital also saw their stock outperform those that were positive FCF.

Since March 2017, however, outspenders underperformed, particularly when oil prices were weak. And even when oil prices rebounded, their return was about the same. In fact, both outspenders and those who spent within their budget were rewarded similarly by the market, Fells said.

“The market is implicating a very different tone to these companies about what they want to see from their investments,” he said.

E&Ps are coming up with a variety of ways to rein in spending and boost shareholder returns. Gulfport Energy Corp. intends to acquire up to $100 million this year in a stock repurchase program. During the fourth quarter 2017 earnings call, Gulfport management said it plans for a reduced 2018 capital budget funded entirely within cash flow.

Super independent Anadarko Petroleum Corp. is also going the share buyback route. The company has expanded its share repurchases begun last fall to $3 billion. About $1.1 billion of the initial $2.5 billion share repurchases was executed during 4Q2017, and to date this month, another 8.5 million shares have been purchased for $500 million at an average price of $58.82/share. Anadarko’s board also authorized a quintuple increase in the quarterly dividend payout policy to 25 cents/share.

While the broader market has been growing aggressively, E&Ps have lagged, particularly over the last year, as many companies announced buybacks during year-end earnings calls, Fells said.

Meanwhile, EQT Corp. (EQT) announced it would spin off all its midstream assets into a separate publicly traded company. The deal follows last year’s $8 billion acquisition of Rice Energy Inc. Now the nation’s largest natural gas producer, churning out about 4 Bcfe/d, some investors have been pushing the company to split its upstream and midstream businesses.

“This is all representative of the tone in the industry,” Fells said.

Not all E&Ps, however, are thrilled with the prospect of being targeted by strategic investors like private equity, venture capital and activist investors. Many micro-cap and small-cap companies nonetheless have a target on their back by these investors that seek control and growth, Fells said.

Activist investor acquisitions increased throughout 2016-2017, including investments in several companies that recently incorporated changes to structure or strategy as a result of investor pressure. “Boards are fearful of becoming a target” as a ratcheted up focus on capital discipline by such investors can bring about changes in leadership and strategies, Fells said.

Just last month, Gamco Asset Management Inc., an investment group led by activist investor Mario Gabelli, pushed National Fuel Gas Co. (NFG) to extract more value from its utility segment. Gamco and its affiliates, which own more than 7% of NFG’s common stock, sent a proposal for NFG to include in the proxy statement for the annual shareholder meeting in March. Gamco wants shareholders to approve a resolution to participate more actively in “the rapidly consolidating natural gas local distribution sector.”

And, despite posting its 13th consecutive quarterly loss, Hess Corp. executives indicated in January the producer would not cut or eliminate the dividend to buy back shares. According to reports, the fourth-largest shareholder, Elliott Management Corp., has been pushing Hess to cut its 25-cent dividend and use the proceeds to fund a buyback.

But with a greater emphasis on shareholder returns, access to capital can be severely restricted for some producers. After spiking in 2016, equity issuances were outpaced by debt issuances 3:1 in 2017, reflecting low interest rates and tightening access to capital, Fells said.

“This is the death of cheap money. Permian and other darling plays still have options, but many producers may have difficulty getting funding,” he said.

Even as the oil and gas industry as a whole strives for operating within cash flow and increasing shareholder returns, there will be producers that continue to outspend. “People still expect these companies to continue growing production,” Fells said.

In fact, about 40% ($53 billion) of the total $135 billion outspent by the sampled E&Ps went to the Permian and Northeast as higher oil prices in the Permian and new gas takeaway capacity in the Northeast drove production growth. And with more than 11 Bcf/d of additional takeaway capacity projected to come online in the Northeast during the next few years, “you need money to drill wells to get production” to fill that pipe, Fells said. As such, he sees Northeast producers continuing to outspend.

“Companies are going to have to think about how they’re going to walk this line. How important is it going to be to hit those production numbers?” he said.

On the whole, BTU expects large-cap producers to rein in spending while small- and mid-cap companies are expected to still outspend. Permian producers, meanwhile, are expected to generate FCF in 2018 amid stronger oil prices and increased hedging in the region.

Hedging profiles can provide some near-term price insulation to protect commitments and cash flow budget outlooks, and 2018 could see a boost in hedging as oil prices in particular have rebounded from lows, Fells said.

Antero Resources Corp., the nation’s largest natural gas liquids producer, is fully hedged at $3.50/MMBtu for 2018 and 2019, helping to “lock in prices ahead of commitments to new projects” and having the ability to “produce regardless of the price environment,” Fells said.

In fact, a look at Antero’s production forecast and BTU’s own forecast for southwest Appalachia production growth, shows the Denver-based independent accounting for half of that growth through 2022, cannibalizing 1.1 Bcf/d of production from other producers after 2019, Fells said.

Even with an increase in hedging, BTU expects the rate of production growth to begin decelerating in 2018. The Lakewood, CO-based analytics company expects a year/year (y/y) exit growth rate for oil production of just over 10% in 2018, down from a y/y exit growth rate of around 14% in 2017. In 2019, that number shrinks to just 5% as gas takeaway limitations in the Permian impede production there.

On the dry gas side, BTU expects a y/y exit growth rate of about 6% in 2018, down from 10% in 2017. By 2019, that figure slides down to 2.5%. In fact, aside from a rebound in oil production in 2020 thanks to new infrastructure scheduled to come online, BTU expects the decelerating growth to continue through at least 2023 as the industry focuses on costs and returns.

“As the investment community focuses on capital discipline, it’s going to change how companies look at production growth and how they interact with capital markets,” Fells said. “In order to be rewarded with the stock market, they have to pay attention to their capital and where it’s going.”