Natural gas futures were choppy Tuesday. Prices swung sharply higher early on the increasing potential for cold weather to linger into early March, but then retreated significantly as part of a broader commodities sell-off amid easing political tensions. The last half hour of trading brought another surge following the latest weather data, with the March Nymex gas futures rallying 11.1 cents to a $4.306/MMBtu settlement. April ticked up 8.1 cents to $4.241. 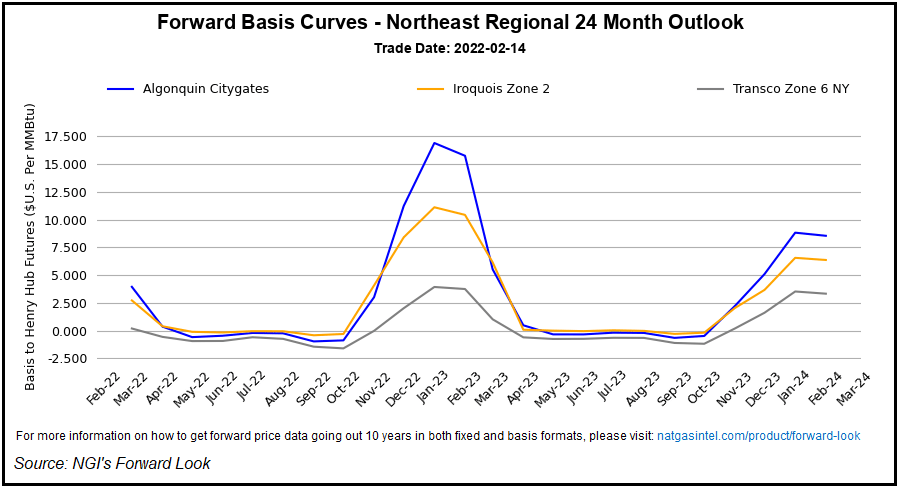 Spot gas prices were mostly higher despite a mild break ahead of another winter storm targeting the Lower 48 this weekend. However, a huge slide in the Northeast sent NGI’s Spot Gas National Avg. tumbling $1.595 to $4.075.

Although it looked like the upcoming winter blast could be the season’s final bow as recently as last week, models reversed course over the past few runs, erasing all the widespread warmth that had been in the forecast for the end of the month. Bespoke Weather Services said the American and European models made yet another move in the colder direction overnight given some changes in the climate patterns.

“Given all of the recent model volatility, confidence is back on the low side,” Bespoke said. “Signals from tropical forcing do not mesh with the colder changes, in our view, but the correlation certainly is not 1:1, so we remain cautious.”

NatGasWeather noted that the midday Global Forecast System (GFS) was still warmer than the European model, but it trended closer in line by showing subfreezing temperatures moving more aggressively into the northern United States for Feb. 26-March 2. All said, the GFS added nearly 25 heating degrees in a 24-hour period.

“Clearly, this is a bullish trend,” NatGasWeather said.

The firm noted that the lingering chill would ensure current supply deficits would be near 250 Bcf at the beginning of March. Furthermore, the potential exists for supply shortfalls to increase further if enough cold air can push into the Lower 48 in early March.

Mobius Risk Group noted that there were several bullish storage data points from various pipelines to start the week. Although population-weighted degree days fell by 20 week/week, the collective withdrawals from the Transcontinental, Southern Star, Columbia Gas and Eastern Gas pipeline systems dropped by a modest 6 Bcf. In addition, a sample of daily facilities was down around 13 Bcf.

“In aggregate, the weekly postings plus daily postings argue for a Thursday inventory report near market expectations of 200 Bcf,” Mobius said.

An important note, said the firm, was the large increase in salt withdrawals. A sample of salt storage facilities posted a 12 Bcf larger withdrawal week/week.

Tudor, Pickering, Holt & Co. (TPH) analysts said there was continued uncertainty as to where supply might ultimately settle ahead of shoulder season. They gave equal chances to curtailed volumes remaining a factor in the current picture and supply declining as a result of activity running hot into year-end, with elevated levels “just that and in the rearview.”

The TPH team noted that Monday’s roughly 95 Bcf/d production level is nearing the 96 Bcf/d it had anticipated in the first quarter of 2022. “But we note that – despite forecasting gas supply broaching new highs towards roughly 99 Bcf/d through the year – following recent strength in residential/commercial demand and continued solid power generation demand as supplies remained constrained, it’s tough to see too much downside to the 2022 forward curve.”

The TPH analysts modeled storage exiting March with 1.4 Tcf remaining in stock and refills throughout the summer driving inventories toward the five-year average by the end of October. “That said, as Haynesville rigs on the dry gas side and private activity in core associated basins continue to outpace our modeling, we see potential line of sight to supply surprising to the upside.”

Cash prices continued to strengthen Tuesday amid lingering cold from the past weekend’s winter blast.

Temperatures across the Midwest and Northeast remained chilly, with overnight lows in the 30s deep into the South and Southeast keeping demand elevated. Milder weather is on the way, however, with temperatures Wednesday and Thursday expected to rise to more comfortable levels in the 50s to 70s.

The hefty losses extended upstream into Appalachia and the Southeast, where Eastern Gas South was down 14.5 cents to $3.580 and Cove Point fell $1.905 to $4.275, respectively.

Similar price increases were seen across the country’s midsection, while California prices rose by as much as 35.5 cents.