“The Mexican Congress now has a more balanced representation, which is an excellent opportunity for negotiation and to have a moderated agenda,” Casiopea Ramírez Melgar, partner at Fresh Energy Consulting and seasoned expert in the Mexican energy sector, told NGI’s Mexico Gas Price Index. “This scenario may provide a more optimistic panorama, especially in terms of avoiding a constitutional change.” 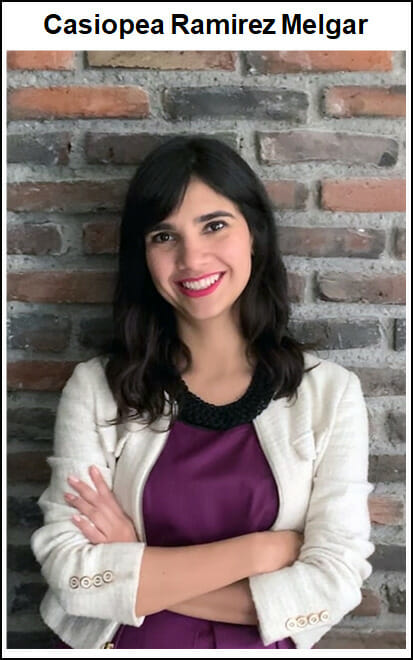 “Apart from the balanced representation in terms of political forces, I would like to underline another outcome in terms of gender balance: more female governors were elected, which, independent of the party they represent, is a tremendous achievement for our political culture,” Ramírez added. “We need representatives that actually represent our composition as a society. There is still a long way to go, but I believe this is a good start.”

Ramírez, who has been a partner at Fresh Energy Consulting since 2018 where she specializes in regulation and the electricity market, is a founding advisor for Voz Experta, which highlights the participation of female experts in predominantly male sectors, such as energy.

Editor’s Note: NGI’s Mexico Gas Price Index, a leader tracking Mexico natural gas market reform, offers the above question-and-answer (Q&A) column as part of a regular interview series with experts in the Mexican natural gas market. Ramírez is the 57th expert to participate in the series.

NGI: For months, the country and energy sector had all eyes on the June 6 elections and results. How could the results of last weekend’s midterm elections affect the Mexican energy sector?

Ramírez: The results of these elections are critical for the sector and for the function of industrywide regulation, in the hopes that there are less injunctions and judicial intervention, and that there is more clarity and harmony in terms of regulation and its application.

NGI: How might the results impact the Mexican energy sector during the next three years?

Ramírez: The Congress now has a more balanced representation, which is an excellent opportunity for negotiation and to have a moderated agenda. If any reform is to be approved, it must be negotiated and agreed upon by opposition parties, which are more inclined to private participation in the energy industry. This scenario may provide a more optimistic panorama, especially in terms of avoiding a constitutional change.

Apart from the balanced representation in terms of political forces, I would like to underline another outcome in terms of gender balance: more female governors were elected, which, independent of the party they represent, is a tremendous achievement for our political culture and is the first time that we have five female governors out of 15 that were elected. We need representatives that actually represent our composition as a society. There is still a long way to go, but I believe this is a good start.

I think it is of utmost importance to have diversity and multi-party representation in Congress and in the state governments that speak for the interests of the entire populace. For the energy sector in particular, we as Mexicans should be interested in having access to the best type of energy possible, in terms of cost, sufficiency and sustainability. I would of course love to see an energy transition that is 100% Mexican, but what’s important isn’t the nationality of the capital funding energy projects. At this point, what’s important is that demand is covered and energy is affordable.

The lack of renewable energy could compromise the development of the country. If a giant company such as Bimbo or Cemex with tons of employees, which are a very important economic motor in Mexico, can’t comply with their emissions or cost reduction targets, it creates a negative impact for the companies, and therefore the employees and the country. We need a market where these companies have access to renewable energy to improve their operations and provide us with affordable and sustainable products and services.

At a country level, I think it’s very important to have a discussion about the electricity sector that doesn’t involve the binary equation of Comision Federal de Electricidad (CFE) versus private and foreign companies. We need affordable high-quality energy that, while being produced, doesn’t harm the environment or the health of our citizens.

NGI: Do you think that the Morena party will still seek the

implementation of changes to the electricity and hydrocarbons law in the upcoming months?

Ramírez: To do so, first what is required is the approval from the Supreme Court. In the case of the Electricity Law, for example, there have been several injunctions presented that claim the new legislation drafted is anti-constitutional. So, it would depend on the Supreme Court to decide if the new legislation is constitutional or not. If they say that it’s not, the government and the Energy Minister, who has been very vocal in support of these changes, will seek other avenues to accomplish their goal.

NGI: Among your clients, what are their thoughts on the state of the Mexican energy sector and all the changes to the industry in the past three years?

Ramírez: In general terms, the clients recognize and are aware that the regulatory framework evolves in any country and market. They understand that regulatory frameworks must comply with public policies and the interests of the governments of the countries where they operate.

But, one of the principal obstacles that they’ve faced here in Mexico is the lack of dialogue. I personally think that dialogue is fundamental to design any regulatory and legal framework. It’s normal for a regulatory framework to evolve and it’s normal that they are adjusted in accordance with technological advances, market trends and demand variations. However, to be sure that a regulator designs an adequate public policy that complies with the supply and demand objectives of the electricity sector, it’s imperative to collaborate with all the stakeholders in the industry. And that is, unfortunately, something that we haven’t seen in this government..

The reforms the current government is trying to carry out in the energy industry haven’t included consultation with members of the industry. The government is proposing radical changes to the sector, and there hasn’t been communication or dialogue. And, because changes to the sector have been so continuous, they have generated an environment of uncertainty and instability. The modifications to the electric industry during this administration started small and strategic, though with time they’ve continued to increase in magnitude, and now they’ve arrived at the point of proposed legal modifications.

Additionally, this administration has gone against the expectations of the entire industry — not just investors, developers and consumers. This government began the administration promising that it wouldn’t change the law and that it wouldn’t seek a constitutional change, though little by little, that’s exactly what they’re trying to do. And this is a very bad sign for a relationship — between the sector and the government — that depends on trust and reliability.

Those contradictory actions obviously impact decision making and the evaluation of Mexico as a market and a country, which translates into higher risk and higher costs. What that creates is a need for companies interested in the sector to be informed at all times, because each modification, small or large, could impact assets, business or investments and require a strategic change.

NGI: For energy companies interested in developing a project in Mexico, will some plans still be put on hold?

Ramírez: Regarding the modifications to the structure of the Electricity Law — even with all the injunctions that have been filed to stop them — the signal is that the government wants to make a profound change to the operations of the market. But, to be able to make those modifications, you have to change dozens of other documents, such as administrative instruction manuals, industry rules, [and] regulations have to change as well. And, only once these modifications are ready, will you be able to understand the new rules of the market and at that point decide whether there is an opportunity for the business model and interests of your company.

To make these changes, an exhaustive effort is required to modify all the documentation necessary, particularly regarding industry processes required for approval of a project. So, if you want to make a sound business decision in a place where regulation is harmonious with the market and functions well, you can’t do so when the regulation is constantly being tweaked. The current state of the market in Mexico is rife with contradictions, which does not make for a reliable investment climate.

The problem in Mexico right now is that, given the proposed changes to the regulatory framework and the injunctions filed to impede these modifications from approval, the industry is in a state of limbo. We are currently waiting to see what happens, and how or if the proposed framework will be applied. There are many small and technical details to be established before a company can decide if they want to continue to seek opportunities in the industry or not.

So, this current pause and waiting period is very important. Members of the sector are awaiting the final judicial resolutions to the proposed modifications and, once they’re known, will make the decisions best suited for their business models.

NGI: For readers unfamiliar with Fresh Energy Consulting, could you give us a brief overview of what the company does and its role in the energy sector?

Ramírez: Fresh Energy is a consultancy dedicated to the electricity sector as well as the development and advisory of renewable energy generators and consumers. We specialize in market analysis and regulatory intelligence to be able to provide our clients with productive and quantitative tools to assist them when making investment decisions. We work with generators as well as final consumers to help them optimize their energy commercialization strategies.