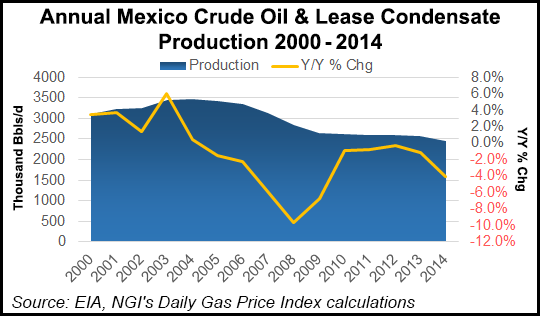 In 2016 through 2018, Moody’s estimates that Pemex production will decline at an average of 5% annually as a consequence of limited ability to make investments, said Moody’s Nymia Almeida, senior credit officer. Low oil prices and a high tax burden will remain the main factors underlying negative free cash flow.

Although production could benefit from investments funded through joint ventures or farm-out arrangements, these will occur only gradually since they are based on a new energy law, which needs to be tested, and on a specific tax law, still being drafted by the Ministry of Finance.

Pemex’s recently-appointed senior management has been directed to “significantly improve the company’s operating performance and credit profile in the short to medium term,” Moody’s said. “These ambitious targets will be challenged by the company’s large size and complex operating and labor structures as well as the weak industry fundamentals.”

Moody’s downgraded Pemex’s long-term national scale and global scale ratings as well as ratings based on its guarantee to “Baa3″/”Aa3.mx” from “Baa1″/”Aaa.mx.” Simultaneously, Moody’s confirmed the short-term national scale “MX-1” rating. This follows the downgrade of the rating on Pemex’s baseline credit assessment, which reflects its standalone credit strength, to “b3” from “ba3,” and downgrade of its global foreign currency and local currency ratings, as well as ratings based on Pemex’s guarantee, to “Baa3” from “Baa1,” on Thursday (March 31).

Moody’s said the actions came about because it expects that the “company’s current weak credit metrics will worsen as it continues to fund capital expenditures from external sources. The outlook on all ratings is negative.” The ratings agency said “there is a very high likelihood of extraordinary support from the government of Mexico to avoid default” on some Pemex debt.

In February, Mexico President Enrique Pena Nieto said at an energy conference in Houston that the country does not plan to slow its energy reforms, despite lower commodity prices, and the will proceed with an offshore auction later this year (see Daily GPI, Feb. 23).

Last December the Mexican government said its third auction to offer oil and natural gas lease blocks for development was its most successful to date, with peak production from the 25 onshore fields expected to reach 77,000 boe/d and bring in $1.1 billion of investment over the next 25 years (see Daily GPI, Dec. 16, 2015).

On Thursday, Moody’s said its view on the likelihood of government support for Pemex “considers the prominent role of Pemex in the Mexican economy, its 100% government ownership, and recent verbal statements of government support for the company. Moody’s believes that it is important to the government to facilitate continued access to the capital markets by Pemex given the company’s role in generating hard foreign currency through oil exports and in paying large annual amounts in duties and royalties, which currently represent about 12% of the government’s annual budget.

“Moody’s believes that government support might come in a variety of ways, including additional supportive statements to inspire investor confidence for market access, temporary tax relief, and cash transfers, which have occurred in the past in the form of subscription to participation certificates.”

Moody’s said liquidity at Pemex is tight. “Management’s goal is to hold at least US$4.5 billion in cash at all times. However, as of December 2015, debt maturing in 2016 amounted to US$11.7 billion. In addition, during the year, Moody’s expects the company to spend about US$4.5 billion for interest and US$12.5 billion for capital expenditures.

“Pemex has recently demonstrated repeated access to domestic and international markets, raising funds in Mexican Pesos, U.S. dollars, Australian dollars, Euros, Japanese yen, and British pounds. So far in 2016, the company has tapped both global and local capital markets as well as certain banking credit lines raising about US$9 billion, during the first quarter after the government expressed verbal support, at the beginning of the year.”