The potential Canadian entry into liquefied natural gas (LNG) markets estimated it could need 2,500 Montney Shale wells to fill export facilities on the northern Pacific coast of British Columbia (BC). 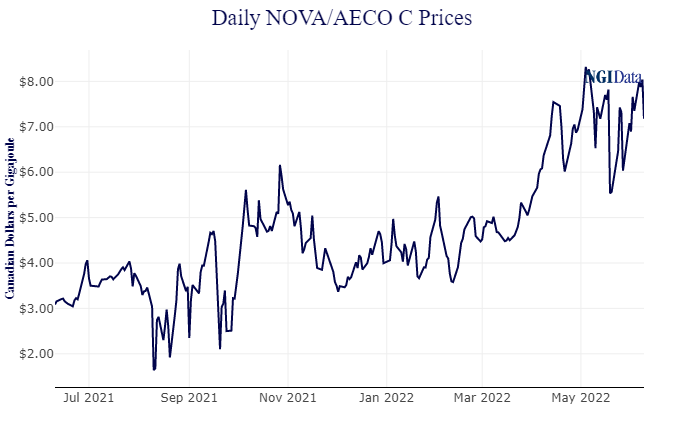 Efficiency and conservation would limit surface disturbance across the area, estimated at 26,617 square kilometers (10,277 square miles). The Montney supply “catchment area” is west of BC’s share of the Alaska Highway, NorthRiver noted in a filing with the Canada Energy Regulator (CER).

The drilling would be concentrated to create 20-well clusters on 125 production pads. The drilling also would entail long horizontals to collect gas and natural gas liquids (NGL) induced by hydraulic fracturing.

Total new northeastern BC land use by the dispersed industrial sites would add up to 18 square kilometers (7 square miles), or only 0.07% of the surface above the subterranean Montney, the firm said.

NorthRiver described its disturbance estimates as educated guesswork that projects future performance based on industry practices to date.

“NorthRiver does not possess knowledge of where or when the developments would occur,” it said.  Nor is NorthRiver able to map or justify the plausibility of any specific hypothetical future scenario.”

The CER request responded to interventions in the review among 35 native groups with claims to be affected by Montney drilling for LNG exports. The Shell plc-led LNG Canada and related infrastructure is now under construction.

By itself, the proposed NEBC Connector would add little to industrial land occupation. More than 90% of the line would be in an established transportation route. However, critics said the project is liable to stimulate industrial proliferation on native turf.

Tribal interventions were encouraged by emphasizing accountability to Indigenous people in the 2019 federal Impact Assessment Act. The BC court last July ordered a freeze on industrial permits until the provincial approval process included a tribal role, as well as political promises to adopt the United Nations Declaration of the Rights of Indigenous Peoples.

Along with land use estimates, CER information requests to NorthRiver generated a 297-page company manual on the status and environmental conditions of tribes touched in any way by the Montney proposal.

While the firm set a 2024 target for completing NEBC Connector, the CER review remains in a preliminary stage with no approval schedule.

NorthRiver echoed official optimism that a new BC approval regime now under negotiation with tribal leaders would turn out to be favorable for LNG and Montney supply development. The CER has invited negotiation participants to provide an update.