Appalachian pure-play Montage Resources Corp. plans to slash spending by $30 million through the remainder of the year as natural gas prices stagnate, but production is expected to increase. 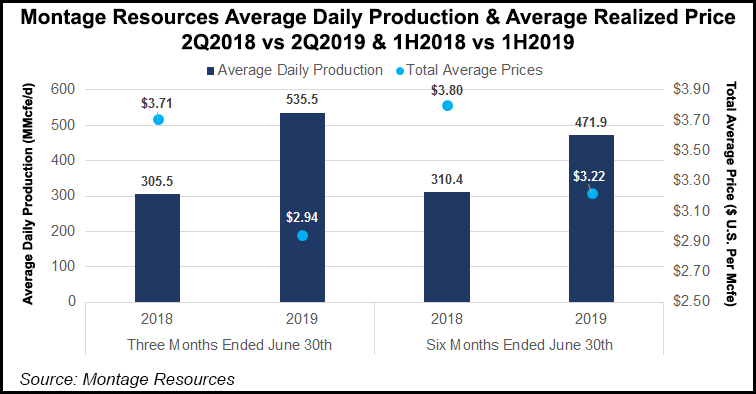 The company joins other leading operators in the region and across the country as the industry pares activity in the face of the latest commodities downturn. Formed earlier this year in a merger between Eclipse Resources and privately held Blue Ridge Mountain Resources, Montage said it would spend its first year focused on cutting costs, generating free cash flow and modestly growing production.

The company doubled down in July, announcing the $30 million spending reduction ahead of its second quarter earnings release. Montage is now guiding for a 2019 budget of $345-370 million.

However, the operational team continues to “exceed expectations,” according to CEO John Reinhart, setting the company up for higher production even as the market is overwhelmed with gas supplies. The company raised its full-year production guidance by 15 MMcfe/d to 535-555 MMcfe/d, as others in the region have despite spending cuts.

Reinhart says cycle times have been reduced by 30% since 2018, while well costs have already reached the 2019 target of $870/lateral foot. The operational gains have boosted production, allowing wells to come online sooner than expected and trimming spending in the process.

Montage also continues to favor its liquids-rich acreage in the Marcellus and Utica shales as it looks to curb the impact of low gas prices.

“Given the company’s focus on increasing liquids-rich production, we believe this will provide a significant benefit during the second half of 2019, as liquids production volumes are expected to grow by approximately 40-45% over the first half of 2019,” Reinhart said.

Management said the company’s wetter acreage would benefit from a renegotiated processing contract with one of its midstream providers for Marcellus properties in Ohio. “The contract allows for a significant improvement in gas processing costs, possesses no additional minimum volume commitments and provides full ethane rejection, which will further improve the overall rates of return and value of our liquids-rich Marcellus acreage,” Reinhart said.

Montage beat its guidance by 4% in the second quarter, producing 535.5 MMcfe/d. That was up from the 407.5 MMcfe/d it reported in the first quarter, which included one month of consolidated results after the merger closed in late February. Eclipse produced 305.5 MMcfe/d in 2Q2018.

Average realized prices in the second quarter, including hedges and firm transportation expenses, slipped to $2.62/Mcfe from $3.22/Mcfe in the year-ago period. Revenues increased 50% to $155.5 million over the same time as a result of the merger.

Montage reported second quarter net income of $27.5 million (77 cents/share), compared with a net loss of $19 million (minus 95 cents) in the year-ago period.