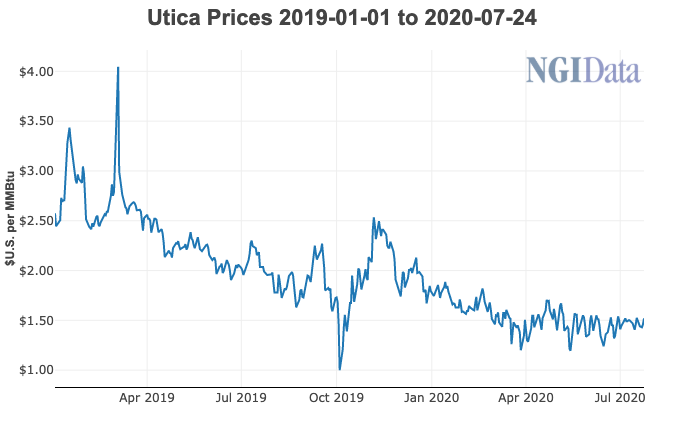 Montage said an international company agreed to purchase the infrastructure, which is in a condensate development area. The transaction is expected to close in 4Q2020. Proceeds would be used to cut debt and improve the strength of the balance sheet.

In a brief operational update announced along with the deal, Montage expects second quarter production volumes to come in at the high end of the 535-555 MMcfe/d announced last month, after rising oil and gas prices prompted it to bring back production curtailed earlier in the year.

Like other Lower 48 operators, Montage shut-in production in April after oil prices fell precipitously and Covid-19 destroyed energy demand. The company primarily curtailed liquids-rich volumes from Ohio’s Utica. It returned those volumes to sales on June 1 and said full-year production would increase as a result. The company is now guiding for 565-585 MMcfe/d this year, or 2% above the midpoint of its previous range.

The company also has lowered its 2020 capital expenditures to $120-140 million from the previously announced range of $130-150 million. The spending cut would be driven by continued efficiency gains and is not expected to impact production volumes. The company reports second quarter results Aug. 6.