Natural gas futures on Monday dropped further amid a diminished demand outlook, extending steady losses recorded over the first half of March. The April Nymex contract settled at $2.484/MMBtu, down 11.6 cents day/day. The prompt month has now lost ground eight of the past nine trading sessions. 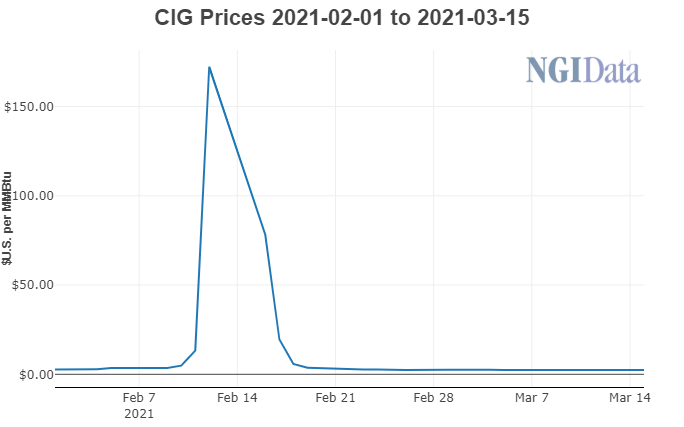 The May contract has declined in tandem. It fell 11.3 cents to $2.523 on Monday as forecasts called for spring weather and tapered heating needs over the remainder of this month and into April.

Cash prices, which got a boost last Friday ahead of a substantial blast of late winter weather over the Rockies and northern Plains, could not sustain momentum Monday. NGI’s Spot Gas National Avg. fell 5.0 cents to $2.555 even as heavy snow and chilly rains cast a freezing pall from Colorado to the Dakotas.

The outlook later in the week and beyond does not favor strong gas demand, explaining the downward pressure on futures.

Bespoke Weather Services on Monday cited “notable declines” in gas-weighted degree days (GWDD) in its updated forecast for the remainder of March, with a warming trend developing next week for the Midwest and East.

“In total, our 15-day forecast is a full 15 GWDDs warmer than our forecast from Friday afternoon, solidly warmer than both the long-term normal and the five-year normal,” Bespoke said. “Our projection for total March GWDDs is now much closer to that of last year, another very warm March. Longer-range signals still favor the warmer-than-normal state rolling on into the month of April as well, which keeps weather on the bearish side.”

The firm noted that, at the start of trading Monday, production had eased some following the impacts of the weekend storm. Meanwhile, liquefied natural gas (LNG) volumes had climbed back above 11 Bcf – near record levels and notably stronger than the 10 Bcf level at which exports had hovered most of last week.

“We also see some strengthening in power burns, which may continue given the decline in prices,” Bespoke said. Those positives noted, however, “the picture has been very weak recently, so continued improvement/consistency is needed before we can say we are finally carving out a price bottom.”

EBW Analytics Group said the warmer outlook cut “projected demand for natural gas by more than 50 Bcf” and effectively shattered “hopes for another cool shot” before the end of March. With “modest” storage withdrawals on tap for the next three weeks, the EBW analysts said the April contract could potentially drop as low as $2.390.

Bearish storage reports over the past two weeks added to the concern permeating markets. The U.S. Energy Information Administration (EIA) reported a withdrawal of 52 Bcf from natural gas inventories for the week ended March 5. The result came in well below expectations for a pull in the 70s Bcf.

A year earlier, EIA recorded a 72 Bcf withdrawal for the period, and the five-year average is a pull of 89 Bcf.

The latest storage report followed one of the biggest inventory misses in recent memory a week earlier. Utilities pulled 98 Bcf from storage in the week ended Feb. 26, far shy of market expectations for a withdrawal in the 130s-140s Bcf.

Over the last two weeks covered by the EIA storage reports, production recovered much more quickly than demand following the Artic freeze that debilitated the Texas energy grid in February, analysts said.

Bespoke issued a preliminary estimate of a 10 Bcf withdrawal for this week’s storage report. It looks for one more draw with next week’s print before injection season could get underway.

“We will be neutral here to see how things shape up at these price levels,” the firm said.

Spot gas prices had advanced 11.0 cents on Friday ahead of a sprawling storm that brought heavy rains and snow over the Rockies and Plains on Sunday and into early Monday.

“Over the weekend, a severe winter storm spread throughout parts of the Rockies and High Plains, bringing with it significant amounts of snowfall and frigid temperature,” said Wood Mackenzie analyst Nicole McMurrer. “In Colorado, Wyoming, Nebraska and the Dakotas, snowfall recorded was historic compared to March records of the past.”

“Snowfall in the Rockies often contributes to production impacts due to physical freeze-offs, road closures and possible power outages,” McMurrer said. She noted that production in the Rocky Mountain region fell to 8.6 Bcf/d by Monday morning, down from 10.2 Bcf/d on Friday.

As the storm weakened Monday so, too, did cash prices.

The Northeast proved an exception to the price decline trend. A weather system was pushing colder air into the Northeast on Monday, with National Weather Service (NWS) forecasts showing likely lows in the teens and 20s Monday night and highs in the 30s on Tuesday.

That development proved intense enough to support cash prices in parts of the region, with Algonquin Citygate jumping 41.5 cents to $4.515 and Iroquois Zone 2 climbing 22.5 cents to $2.975.