Natural gas futures advanced for a fourth consecutive session on Monday as a bout of chilly spring weather was forecast to sweep across large swaths of the Lower 48, likely providing a boost for demand and cash prices. 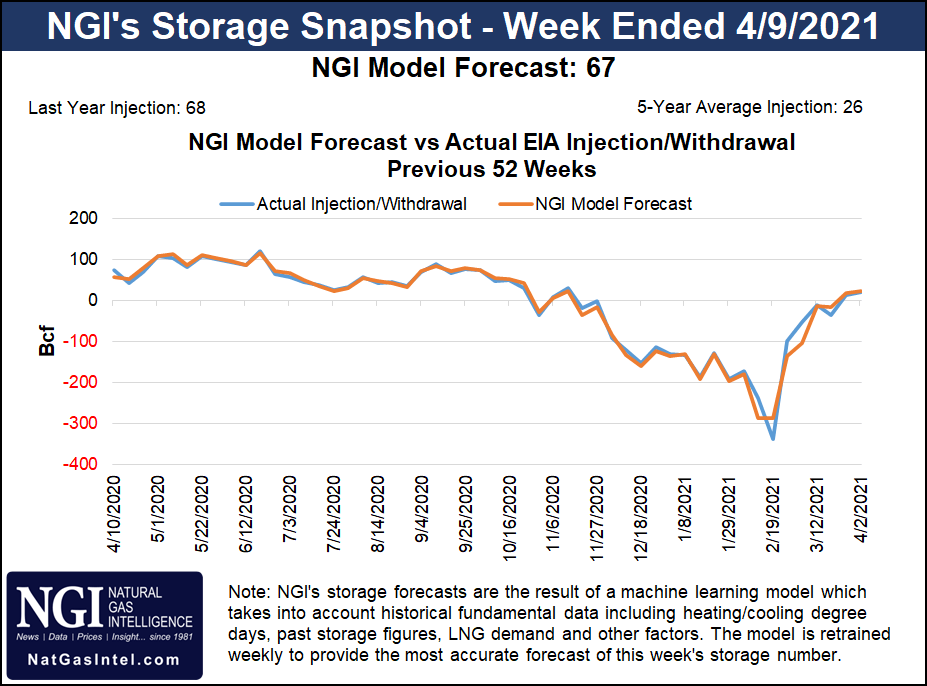 “This week’s trading will be heavily affected by weather,” analysts at EBW Analytics Group LLC said. “If current forecasts hold, cooler weather should arrive by mid-week and continue for much of the rest of the month. While space heating demand is expected to be only slightly above normal, this should be sufficient to lift both cash prices and futures.”

Bespoke Weather Services said forecasts shifted cooler over the weekend, showing elevated heating-degree days (HDD) in the middle of the nation and moving east this week. Colder air is expected to descend from Canada, bringing a series of chilly weather systems across the northern half of the country from Tuesday into the coming weekend.

Beyond weather, all eyes will soon turn to Thursday’s Energy Information Administration (EIA) storage report, Bespoke noted, with analysts expecting an increase in stockpiles. The forecaster estimated a storage build of 69 Bcf for the week ended April 9.

NGI’s model predicts an injection of 67 Bcf. That would compare with a 68 Bcf build recorded in the year-earlier period.

“Running our storage model over the weekend shows us that the last few EIA numbers have definitely signaled an improvement in the supply/demand balance,” a driver of futures last week, Bespoke said.

The latest government storage data last week fell in line with market expectations. EIA reported a 20 Bcf injection for the week ended April 2. This compared with major surveys settling around a build in the low 20s Bcf.

Total working gas in storage as of April 2 stood at 1,784 Bcf, which was 235 Bcf below year-earlier levels and 24 Bcf below the five-year average, according to EIA.

“This goal is expected to go well beyond the commitment made five years ago in Paris to reduce U.S. emissions by 26-28% compared to 2005 levels by 2025, with many sources speculating that the Biden administration will pledge to reduce total U.S. man-made economy-wide carbon emissions by 50% versus 2005 levels by 2030,” the EBW analysts said.

Spot gas prices on Monday climbed higher as unseasonably cool weather systems pushed into the Midwest and were forecast to continue eastward as the week progresses.

“A series of colder than normal weather systems with rain, snow and chilly lows of 20s to 40s will sweep across the northern” United States “the rest of the week for a swing to strong national demand,” NatGasWeather said. “The southern U.S. will also see bouts of showers, although mostly comfortable with highs of 60s to 80s besides hotter 90s Southwest deserts.”

The systems “remain cold enough to maintain a bullish lean through April 22 before cool air fades across the Great Lakes and Northeast, but a full one to two days later than the weather data showed late last week and where several HDDs were added,” the firm said.

Against that backdrop, prices climbed throughout the Midwest, with Chicago Citygate ahead 10.0 cents day/day to average $2.480 and Defiance up 9.5 cents to $2.365.

On the pipeline front, Columbia Gas Transmission (TCO) said it would perform planned pigging on Line 1278 in eastern Pennsylvania, with restrictions impacting gas days on Tuesday and Thursday this week. Wood Mackenzie analyst Anthony Ferrara estimated the work would limit up to 170 MMcf/d of receipt on those two days.

“Over the past 30 days,” he said, “the MILFORD-21 interstate interconnect with [Tennessee Gas Pipeline] TGP has averaged 192 MMcf/d and maxed at 219 MMcf/d of receipts.”