Given unseasonably cold temperatures that peaked early during the week ended March 8 before tapering off, some moderation in weekly spot prices was inevitable; indeed, the NGI Weekly Spot Gas National Avg. slumped $1.155 to average $3.435/MMBtu. 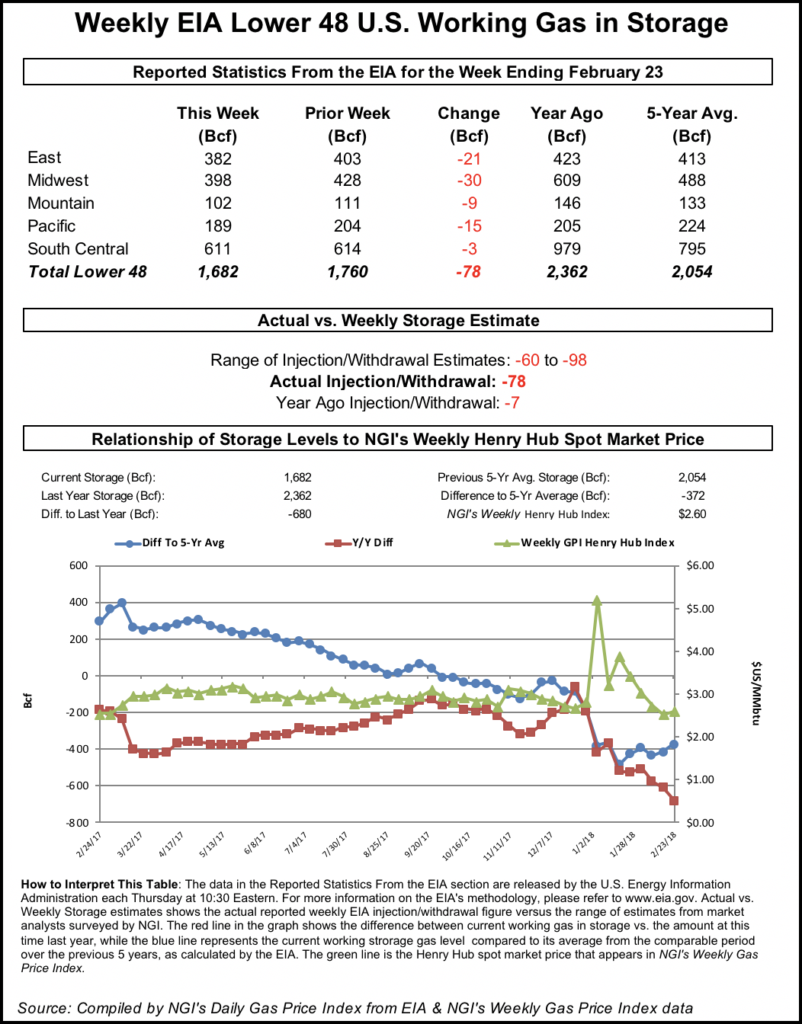 After a record-setting performance a week earlier, Northwest Sumas backed off from its recent dizzying spot price peaks to average $8.870. That was a whopping $84.390 week/week decline as supply constraints in the Pacific Northwest eased somewhat.

Midwest and Midcontinent prices also sold off sharply as moderating temperatures soothed physical markets that had been volatile to end the previous week. Chicago Citygate dropped $2.730 to average $3.205, while Northern Border Ventura sold off $3.500 to $3.165.

A quiet day in the futures market saw the April contract give up 0.1 cents Friday to settle at $2.865. The narrow trading on Friday was in keeping with the week’s range-bound price action. After opening Monday at $2.845, the front month climbed a meager 2.0 cents week/week.

The front month approached resistance around $2.90-2.92 Friday but failed to break through as warmer afternoon model guidance and weakness in the cash market pressured prices lower, according to Bespoke Weather Services.

“Our sentiment is back to slightly bearish heading into the weekend, as we see long-range models indicating a pattern breakdown that favors more warmth as we move into the final portion of March and continue to see balances loosen as short-term cold moves out,” Bespoke said Friday. “…While storage levels are low, uncertainty surrounding just how much production can grow means the market is not yet particularly concerned about these stocks, and accordingly we are seeing the winter strip sell off through the past week.

“This winter weakness, when combined with recent balance loosening and warmer long-range forecasts, has us seeing $2.90-2.92 April contract resistance as increasingly likely to be firm” in the upcoming week, with “downside opening up on any further” weather-driven demand declines or additional slack in balances.

The 149 Bcf pull for the week ended March 1 compares with a 60 Bcf withdrawal for the year-ago period and a five-year average pull of 109 Bcf. It also fell on the higher side of consensus expectations.

Prior to Thursday’s report, major surveys had pointed to a number in the 141-145 Bcf range, with estimates as high as 155 Bcf and as low as 123 Bcf. Intercontinental Exchange (ICE) EIA financial weekly index futures had settled at a withdrawal of 150 Bcf. NGI’s storage model predicted a 136 Bcf withdrawal.

“Over the next couple weeks, temperatures are expected to remain below normal as the inventory deficit is expected to deepen,” analysts with Tudor, Pickering, Holt & Co. (TPH) said in a note to clients Friday. “Week/week, U.S. dry natural gas production is down about 800 MMcf/d due to production freeze-offs in the Permian and Rockies,” while liquefied natural gas (LNG) exports remain about 1.0 Bcf/d higher than the trailing 30-day average.

“All-in, the market was more than 1.0 Bcf/d undersupplied, and over the past four weeks has trended toward a slight oversupply (less than 1.0 Bcf/d),” the TPH team said. “Nevertheless, we are quickly approaching the shoulder season and while natural gas may have avoided a doomsday scenario, we still expect 2019 peak storage to be more than 500 Bcf above last year’s mark.”

According to analysts with Raymond James & Associates Inc., the 149 Bcf draw implies the market was 2.4 Bcf/d looser than last year on a weather-adjusted basis, and the market has been 4.2 Bcf/d looser on average over the past four weeks.

“Longer term, with associated gas production remaining robust, the market needs only modest supply growth from Appalachia (and likely declines in most other gas plays) to balance,” the Raymond James team said. Exports to Mexico and a ramp-up in LNG tanker activity should be positive for gas demand this year, but “we believe increasing domestic gas supply and growth in renewables that are increasingly becoming more cost competitive with gas are putting further pressure on Henry Hub prices.”

With some pleasant temperatures in the forecast for key markets over the weekend, spot prices moved mostly lower Friday.

The Northeast locations posted the sharpest declines, though prices generally fell throughout the Lower 48.

Algonquin Citygate dropped 96.0 cents to average $3.270 as Radiant Solutions was forecasting highs in Boston to climb into the mid-40s over the weekend and into Monday. Further south, temperatures in Washington, DC, were expected to climb into the 70s Sunday, according to the forecaster.

A force majeure on Natural Gas Pipeline Co. of America (NGPL) was expected to impact up to 350 MMcf/d of volumes flowing out of the Permian Basin and Oklahoma starting Monday, according to Genscape Inc.

“The pipe experienced horsepower issues at its Compressor Station 102 in the Oklahoma Panhandle for the second time this year, resulting in an outage that NGPL anticipates will begin Monday (March 11) and last through Friday (March 15),” Genscape analyst Joe Bernardi said. “Primary firm and secondary in-path firm transport through the downstream Compressor Station 103 will be limited to 69% of contract maximum daily quantity for the duration of this work.

“The most recent event at this compressor, which lasted 10 days and started without a specified end date, featured the same capacity reduction. While it was in effect, flows through this meter averaged 912 MMcf/d, compared to a previous 30-day average of 1,262 MMcf/d, a 350 MMcf/d difference.”

Meanwhile, calls for wintry precipitation that could impact the heart of the Lower 48 over the weekend failed to spark much of a prices response.

“The weather will become very active across a large part of the nation” over the weekend as a “strong low pressure system is forecast to track across the Plains toward the Great Lakes,” the National Weather Service said Friday. “The primary focus initially will be across the West as the storm system consolidates and brings rather widespread rain and snow across portions of the Pacific Northwest, the Great Basin and into the Rockies.

“As a strong upper level shortwave approaches from the west, a low pressure system is forecast to rapidly intensify and move east-northeast across the central Plains on Saturday,” the forecaster said. “The atmospheric ingredients will be in place for a major winter storm from Nebraska to Wisconsin, and the potential exists for blizzard conditions across much of the eastern Dakotas and central Minnesota as the pressure gradient tightens and winds increase to over 35 mph. Total snowfall is expected to range from four inches across the northern High Plains, increasing to a foot possible over western Minnesota.”

In the Rockies, prices mostly fell, though a handful of points continued to trade at a premium to Henry Hub. Opal gave up 11.5 cents to $3.430. The exception was the volatile Northwest Sumas, which gained $3.125 to average $10.000 even as the supply constraints there appeared to have eased compared to the week before. Trades at the Pacific Northwest point went as high as $25.000 Friday but didn’t approach the peak of $200 recorded a week earlier.