In an escalating dispute at FERC, Maritimes & Northeast Pipeline LLP (M&NE) responded to a motion to intervene and protest filed last week by Repsol Energy North America Corp. over the pipeline company’s proposal to revise its tariffs.

According to documents filed with the Federal Energy Regulatory Commission [RP16-363], Repsol takes issue with M&NE’s proposals to replace the current “first come, first served” methodology for allocating available capacity on the pipeline with one based on net present value, or NPV (see Daily GPI, Jan. 26). Repsol also objects to M&NE requiring an open season to be held following receipt of a request for capacity with a term greater than 30 days; specifying time limits for capacity requests to commence at a future date; and expanding M&NE’s rights for reserving available capacity for a future expansion.

Repsol also wants M&NE to clarify whether the proposed tariff changes would also apply to the latter’s Atlantic Bridge Project [CP16-9], and if the proposed language would give M&NE the right, but not the obligation, to hold an open season following receipt of a request for firm service of 30 days or less.

But on Wednesday, M&NE urged FERC to reject the protest by Repsol on the grounds that the Commission permits an NPV methodology to determine the highest valued use of unsubscribed interstate pipeline capacity. M&NE also argued that its proposed posting requirement for capacity to be reserved for a future expansion is just and reasonable.

According to M&NE, FERC requires pipelines give shippers “a reasonable opportunity to bid on and win” available capacity before a pipeline reserves capacity for a future expansion like Atlantic Bridge, and that five business days is considered an ample amount of time.

“Repsol argues that the Commission should make an exception in this case and require a 30-day posting period because Repsol is unaware of the actual quantity of capacity that will be available on a south-to-north basis following the in-service date of the Atlantic Bridge Project,” M&NE said. “Repsol claims that neither it nor any other shipper can ‘develop any plans or assessments at present regarding utilization of [south-to-north] capacity’ on the M&NE system until the precise quantity of the south-to-north capacity is known.

“However, Repsol does not explain why advance knowledge of the quantity of capacity is necessary to evaluate its need for the capacity or why five business days is not sufficient time for it to submit a request for the capacity or to seek a change in primary points under its existing agreement.”

M&NE said capacity created by Atlantic Bridge, as well as similar projects, would also be subject to NPV open season requirements following the in-service date of the applicable project, but added that the language cited by Repsol in its complaint “will not result in M&NE declining to subject requests for new capacity resulting from the Atlantic Bridge Project or any other project that creates ‘a material amount of new south-to-north capacity’ on the M&NE system.”

M&NE said “its discretion regarding whether to hold an NPV open season for capacity requests with a term of 30 days or less will apply only to requests for agreements that cannot extend beyond 30 days — for example, agreements that do not contain a right-of-first refusal, rollover or evergreen clause.”

Atlantic Bridge would enable M&NE affiliate Algonquin Gas Transmission LLC to provide 132,705 Dth/d of firm capacity from its receipt points at Mahwah, NJ, and Ramapo, NY, to new and existing points on the Algonquin system, including an interconnection with M&NE at Beverly, MA (see Daily GPI, Dec. 24, 2015). The project also would allow M&NE to provide 106,276 Dth/d of firm capacity from Beverly to existing delivery points on its system for project shippers. The project is expected to be in service by the second half of 2017.

Repsol is the single largest shipper on M&NE, holding nearly all of the pipeline’s firm capacity. It is also the sole anchor shipper for M&NE’s Phase IV expansion, with 730,000 Dth/d of firm capacity until 2034, spanning the entirety of the M&NE system, which has total firm end-to-end capacity of 833,317 Dth/d.

It is not the first time Repsol has complained to FERC about Atlantic Bridge. Last December, Repsol said M&NE and Algonquin have failed to answer questions over how the project could impact M&NE’s existing shippers (see Daily GPI, Dec. 31, 2015). 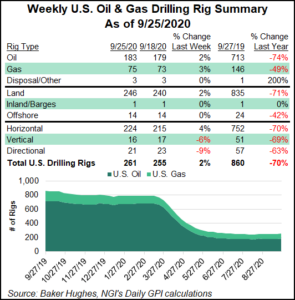 A positive development in an otherwise profoundly challenging stretch for the energy industry, the week ended Friday saw gains in both oil and natural gas drilling, according to the latest numbers from oilfield services provider Baker Hughes Co. (BKR). The U.S. natural gas rig count gained two units to finish the week at 75. Alongside…