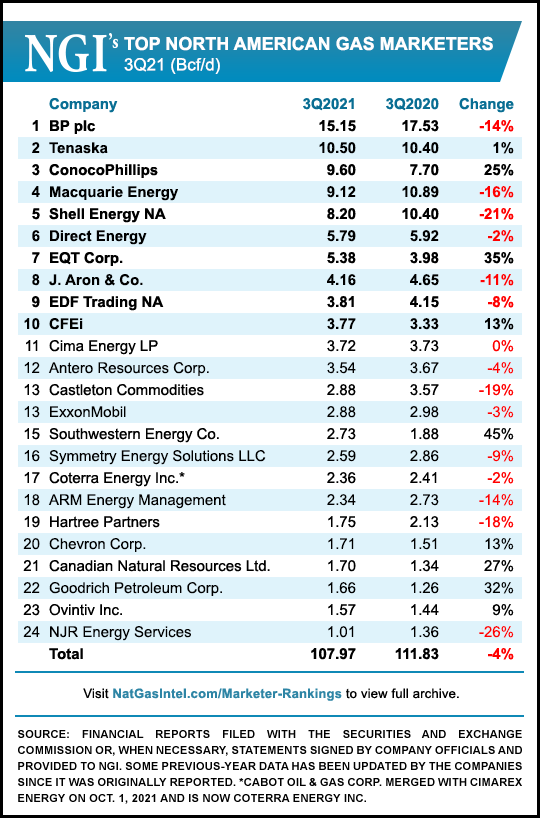 The downward slide continued a trend dating to production curtailments imposed by the coronavirus pandemic in 2020, according to NGI’s quarterly tally.

Several marketers reported robust gains in the quarter, however, and said bullish developments in 2021 pointed to long-term momentum for natural gas.

Steep drops among some of the largest marketers propelled the overall decline. Longstanding No. 1 BP plc dropped about 14% year/year, while No. 4 Macquarie Energy fell 16% and No. 5 Shell Energy NA slid 21%. Each reported sharp declines in the prior quarter as well.

Large publicly traded companies are under pressure from Wall Street to return more capital to investors and devote greater resources to renewable fuels, necessitating pullbacks in oil and gas investments. This, by extension, affects marketing activities among BP and other major players.

“There’s no question that the demand for more solar, wind and so on are real, and that’s impacting the decisions many of the big guys make,” head trader Mike Matousek of U.S. Global Investors told NGI. “But there’s also no question gas has been in high demand and will remain important.”

Indeed, natural gas futures surged during the third quarter, reaching multi-year highs amid strong late-summer cooling needs and mounting demand for gas in storage ahead of winter – both domestically and globally. While prices have eased in recent weeks amid a mild start to the heating season, Henry Hub futures remain far ahead of year-earlier levels.

Four of the top 10 companies in NGI’s ranking posted year/year gains in the third quarter. Overall, nine of the companies reported advances.

Among the biggest players, EQT Corp., ConocoPhillips and Mexico’s CFEinteranacional (CFEi) all reported strong double-digit percentage gains. The results were fueled in part by a long and searing summer in North America and robust demand for U.S. exports in both Europe and Asia as the global economy rebounded from the pandemic.

“World events have underscored the important role that natural gas plays in the world’s energy ecosystem, not only in reliability and costs, but in meeting our global climate goals,” Rice added. He noted mounting global energy needs as populations and industries swell as well as solar and wind supply limitations.

“The natural gas market improved dramatically during the third quarter, and the enhanced pricing, coupled with a 7% sequential growth in production, led to substantially” improved financial results for the company, CEO Walter Goodrich said on the 3Q2021 earnings call.

“The core of the Haynesville Shale continues to deliver very strong results,” added Goodrich, whose company in November agreed to sell to Paloma Partners for $480 million. “Increasing production volumes are helping reduce per unit operating costs, while coupled with the improving natural gas prices, our cash margin increased to 70% in the third quarter.”

Importantly, production broadly has climbed during the current quarter, reaching 2021 highs of around 97 Bcf at points in November and hanging near 96 Bcf/d early in December, up more than 5% from a year earlier. With more gas to market, activity across the sector could gain more traction, particularly if the coming winter proves harsh after relatively mild late-autumn weather.

“Producers are gradually stepping things up following some strong periods of demand earlier this year and in anticipation” of winter, Samco Capital Markets’ Jacob Thompson, a managing director, told NGI. “And some of the private oil guys, seeing prices rebounding there too, are getting back at it, and you get the associated gas with that activity, too…I think you’ll see some bigger players ramping up next year as well.”

Of note, ConocoPhillips is hardly alone among gas marketers in the merger and acquisition arena.

When it announced the acquisition of Sequent, Williams said the two companies’ combined volumes could exceed 8 Bcf/d, though it did not report a third quarter figure in its results.