A U.S. arm of Royal Dutch Shell plc is throwing in the towel in the Kansas portion of the Mississippian Lime, selling off 45 producing wells and about 600,000 net lease acres. 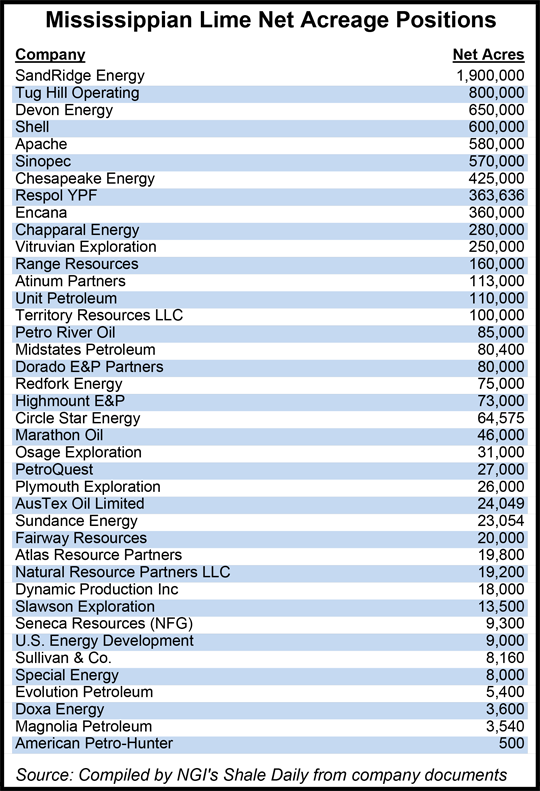 Shell ceased its exploratory drilling operations in June and a review of the results has prompted the sell-off, management stated. Shell had been drilling wells in the heart of the play in Kansas in Barber, Harper, Kingman, Pratt, McPherson, Sedgwick, Sumner, Rice and Reno counties.

Shell launched a strategic review of all of its North American portfolio after taking a $2 billion-plus writedown in 2Q2013 (see Shale Daily,Aug. 2). The North American exploration and production unit is expected to remain at a loss through “at least” December, according to CEO Peter Voser.

The Mississippi Lime play (MLP), also known as the Mississippian Lime, has proved hit and miss for operators. The porous limestone formation extends through northern Oklahoma, and southern and western Kansas. Originally tapped by vertical drilling, unconventional drilling techniques have brought a lot of producers big and small into the region.

Shell’s review of the MLP exploratory wells identified assets “that do not meet our targets and the best value option for Shell is to divest. Therefore, Shell has completed its appraisal of its exploration holdings in the Mississippi Lime play and has elected to market these assets for sale and redeploy resources elsewhere in our global portfolio.”There is no firm timetable for the sale.

Shell remains committed to other North American onshore and offshore projects but in locations with a better payoff.

“We continue to be appreciative of the supportive business environment that we have experienced in Kansas since drilling our first well in 2011,” stated Shell. “We are proud of both the business and the relationships that we have built in Kansas. Shell will continue to honor its 2013-2014 commitments to social and philanthropic giving in the community.”

Some operators are claiming to see strong results in the MLP, but the positives have been from results in the Oklahoma portion of the trend, not Kansas, including SandRidge Energy Inc. (see Shale Daily, March 4). SandRidge has about 1.9 million net acres in the Mississippian, according to company documents.

Devon Energy Corp., with an estimated 650,000 net acres mostly in Oklahoma, reported in August that in the Mississippian-Woodford trend, that it had 36 operated wells that ramped up between April and June (seeShale Daily, Aug. 9). Overall production in the play for Devon was 7,000 boe/d at the end of June, a 100% increase from the end of 1Q2013. And Midstates Petroleum Co. Inc., which has only about 80,400 net acres in the play, reported earlier this month that it had 11 wells producing since July 1 (see Shale Daily, Sept. 12).

However, many operators have had little activity in the Kansas side, and several have decided to move on or look for other ways to finance their operations.

Some are keeping quiet about their plans. Apache Corp., which is slimming its portfolio, holds a 580,000-acre position in the MLP, but it drilled no wells in the first part of the year (see Shale Daily, May 10).

According to the Kansas Department of Commerce (KCC), new drilling permits in the chalky play have fluctuated over the past year. The state issued 20 horizontal well permits statewide in June, four more than in May, but “below the 12-month average of 25 new horizontal permits.” The June permits were “below the year/year figure of 37 horizontal permits issued in June 2012.

In addition, production appears to be declining in the state’s portion of the Mississippian Lime. KCC said five horizontal wells were tied to sales in June, “which is below the 12-month average of 13 additional horizontal wells entering production each month.”

As of June 30, 69 wells had been permitted without any drilling activity taking place, state officials said. “This is an increase from May’s total of 66 wells, but it remains below the 12-month average of 70 permitted but undrilled wells.

“June ended with a total of 73 spudded wells, an increase of six wells from May and below the 12-month average of 85 spudded wells.”