July natural gas futures debuted at the front of the Nymex curve with a thud, tumbling 16.8 cents to $8.727/MMBtu ahead of the Memorial Day holiday weekend. 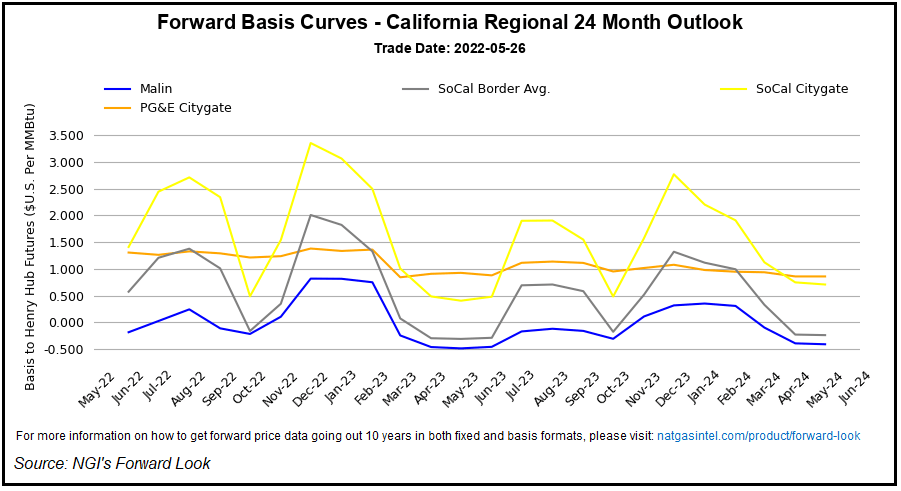 After falling to hold intraday gains on Thursday, bearish technical pressure took hold of Friday’s trading session early. The July Nymex contract opened less than a dime lower at around the $8.880 mark but quickly fell below $8.500 as trading got underway.

While technical factors were in play, fundamentals also weighed on prices. For example, weather forecasts cooled a bit for the next week overall, aside from a brief period of strong national demand from Sunday to Tuesday. The period through June 8 appeared to be “mostly comfortable,” according to NatGasWeather.

There is potential for hotter weather to arrive around June 9-14, although the data has more to prove, the forecaster said. In addition, long-range forecasts reflected a rather bearish set-up for the first half of June, with notable heat not materializing until the second half of the month.

“Essentially, the longer range European Centre wasn’t quite as hot as needed the front half of June but was relatively bullish the second half of June,” NatGasWeather said.

Even with the cooler forecast, gas demand for power generation has remained strong. Tudor, Pickering, Holt & Co. (TPH) analysts said power burns capped the week at 29 Bcf/d, tracking as much as 1.5 Bcf/d ahead of norms in recent days.

As warmer weather kicks power generation demand into high gear in the coming weeks, “supply remains a key focal point,” according to TPH. The analyst team said production backtracked toward around 94 Bcf/d in recent days after a sustained run in the 95 Bcf/d range over the last three weeks. TPH said lower volumes primarily were from the Permian Basin, where output trended toward 13.3 Bcf/d to exit the week. This is down around 1 Bcf/d from the prior week’s average of 14.1 Bcf/d.

How Tight Is Gas Supply?

The supply/demand balance portends a continuation of the tightness observed in the latest government inventory report.

The Energy Information Administration (EIA) on Thursday reported a smaller-than-expected 80 Bcf injection into storage for the week ending May 20. The build reflected a market that was about 1 Bcf/d undersupplied, according to TPH. With the injection, inventories rounded out the week at 1,812 Bcf, which is around 15% below the five-year average of 2,139 Bcf.

Looking ahead to the next EIA report, TPH said its preliminary modeling pointed toward a build of 85 Bcf, tighter than the five-year average build of 100 Bcf.

Mobius Risk Group pointed out that recent trading has made it particularly vexing for those needing to refill storage with no economic uplift, with the June and July contracts commanding a premium to the typically higher-priced winter contracts. On Friday, however, January Nymex gas stood about 8.0 cents over July.

Mobius said it looked to see how spot pricing during the first week of June held up against a near $9.00 expiry. In addition, July futures should come into sharper focus as the risks of hurricane-induced liquefied natural gas (LNG) disruptions increase and elevated cooling demand square off.

The gas market put on a Memorial Day sale Friday for spot gas deliveries, with prices off more than $1.00 at several market hubs across the country. With low demand, thanks to relatively moderate temperatures as well as the holiday weekend, California saw some of the biggest losses.

Similarly steep discounts were seen upstream in the Permian Basin. Waha cash was down $1.140 to $7.410.

Prices across the Rockies also plummeted as a series of cold fronts advanced inland off the Pacific Ocean through the weekend. The National Weather Service said much colder temperatures and unsettled weather were in store for most of the Intermountain West. The Pacific Northwest and the northern Rockies also were likely to see plenty of shower activity and some locally heavy rainfall.

“Sufficient cold air is expected to arrive by Saturday night and Sunday for there to be some locally heavy snowfall for portions of the northern Rockies,” said NWS. Some areas could see up to two feet of snowfall to round out the weekend.

“Some beneficial rains will also begin to spread out across portions of the northern High Plains as a series of low pressure centers eject east out of the Rockies,” NWS forecasters said.

Despite the chill, cash prices moved sharply lower ahead of the weekend. Northwest Wyoming Pool was down 92.0 cents day/day to average $7.715 for the three-day gas delivery.

Other U.S. locations followed the same trend, with double-digit declines occurring as any meaningful summer heat was relegated to the southern states. In fact, after reaching the 90s earlier in the week, the East Coast was gearing up for the arrival of a cold front this weekend.