A rebound in Permian oil and gas permitting, along with a lift in the Haynesville and Marcellus shales, lifted the Lower 48 count in July to a three-year high, according to state and federal data. 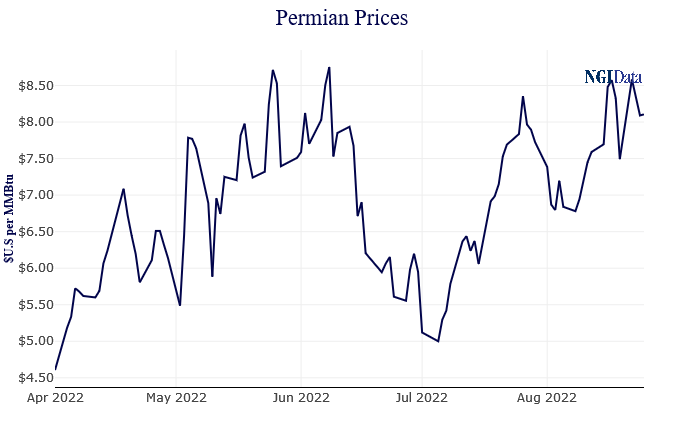 The “midsummer boost” compiled by Evercore ISI analysts, found that permitting overall rose by 707 month/month (m/m) and was 63% higher year-to-date. Permian permitting increased by 273 from June, up 22%.

“Losses over the month were somewhat muted,” the analysts said of July. Denver-Julesburg Basin permits dropped by 49, or 54% m/m.The Powder River Basin saw a decline of 38 permits from June, down 17%.

After permits are pulled, it usually takes operators three to six months to move equipment and begin development. For the week ending last Friday (Aug. 19), the U.S. rig count eased one unit lower week/week to finish at 762, according to Baker Hughes Co. (BKR). The 762 active domestic rigs compare with 503 rigs running in the year-earlier period, the BKR numbers showed, which are based partly on data from Enverus.

The Permian accounts for 40% of the total permits issued in the United States, followed by the Eagle Ford Shale, with a 13% share, the Evercore analysts noted.

Meanwhile, energy-related jobs are seeing an uptick, according to the U.S. Bureau of Labor Statistics. The government agency reported a 1.6% increase in exploration and production jobs for July, which was about 21% higher year/year and close to 14% year-to-date.

According to the Texas Independent Producers and Royalty Owners (TIPRO), direct upstream employment in the state during July totaled 202,800, an increase of 6,800 from June.

“Texas upstream employment in July 2022 represented an increase of 35,400 positions compared to July 2021, including an increase of 8,600 in oil and natural gas extraction and 26,800 jobs in the services sector,” TIPRO noted.

Unsurprisingly, the Houston metropolitan area, which is the center of the state’s energy industry employment, added 2,000 upstream jobs in July over June, for a total of 68,800 direct positions.

“Houston metro upstream employment in July 2022 represented an increase of 11,000 jobs compared to July 2021, including an increase of 5,200 in oil and natural gas extraction and 5,800 jobs in the services sector,” the industry group noted.

There were 13,614 “active unique jobs postings for the Texas oil and natural gas industry in July, an increase of nearly 10% compared to June numbers,” it said.

Texas Oil & Gas Association President Todd Staples said the state’s job growth “is good news, because these high quality jobs support hundreds of thousands of Texas families and contribute directly to our nation’s energy security and our state’s economic might.”
Since the September 2020 low point in employment, the state’s energy industry has added 45,800 upstream jobs, averaging growth of 2,082 jobs per month, Staples noted. “At 202,800 upstream jobs, July 2022 jobs were up by 35,400, or 21.1%, from July 2021. July’s employment topped 200,000 jobs for the first time since March 2020.”