Midstream players in New England all agree that the region’s recent winter price spikes are an issue, but they don’t all agree that new pipeline buildout is the most effective way to solve the peak demand riddle. 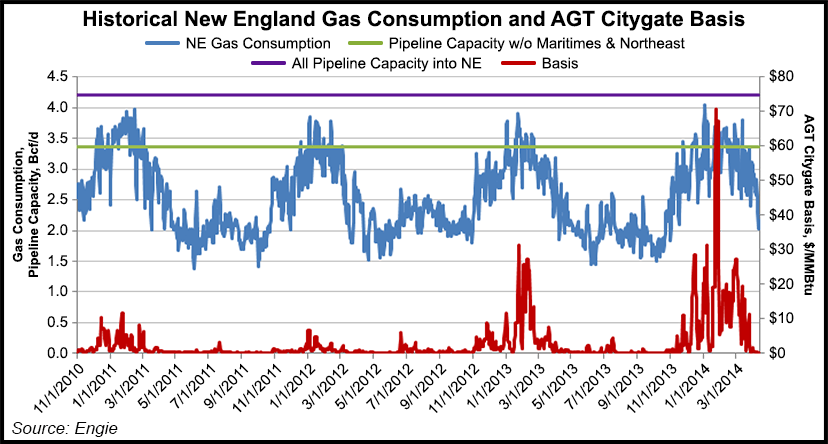 “I look at reliability, and as a pipeline operator, I see a region that has 50% — if not now, it soon will be — of its generation resource fueled by natural gas. And if I look at that and say, how much of that is actually supported by contract, how much is my pipeline designed to deliver that to generators, it’s essentially none,” Crisp said. “So on a peak day, or days of constraint, what happens is there’s not enough pipeline capacity to serve the natural gas-fired electric generators, so the region switches from natural gas to oil or coal to keep the lights on.”

During a snowstorm this past Valentine’s Day, about 45% of the region’s generation mix was powered by coal and oil, with gas falling to 16% of the mix, Crisp said. “This was during a time of the year when we actually had LNG coming in on the east end of the system…The constraints, the way the system is designed, on a peak day it’s just not capable of being able to meet the need of the natural gas-fired generation. So from that perspective, I see that as a reliability issue.”

Among Spectra’s proposed expansions of its Algonquin Gas Transmission (AGT) system, the Access Northeast Project, under development in partnership with Eversource Energy and National Grid, is dedicated to supplying electric generation demand in New England, Crisp said. Access Northeast, capable of delivering up to 1 Bcf/d, would increase reliability and reduce carbon emissions by limiting the amount of fuel switching caused by capacity constraints, he said.

“Just from a reliability perspective…3.6% of the natural gas-fired generation on Algonquin and Maritimes & Northeast [M&NE] is firm. The rest of it is interruptible and secondary, but with the Access Northeast project, we could increase that number to approximately 45% of the generation in our system having access to firm capacity,” Crisp said.

Other New England midstream operators presenting last week called for better use of existing infrastructure, particularly in light of the risks to new buildout posed by anti-pipeline sentiment in the region.

Cynthia Armstrong, director of marketing for PNGT, highlighted the opportunity to bring incremental volume from Western Canada into the region through the north via TransCanada’s system. By adding compression at existing facilities and maximizing upstream build in Canada, PNGT could offer an additional 150,000-300,000 Dth/d delivered into M&NE, Algonquin or Tennessee Gas Pipeline (TGP), she said.

“Pricing structure between Western Canada and Marcellus, it’s competitive. Is it the absolute cheapest? Not right now, there’s a spread, but it’s a highway that’s there. The certainty is the connection, the certainty of the pipe in the ground, and that is going to become something that people are catching onto more and more as maybe the first thing we should look at,” Armstrong said.

“When I say I can add 150,000-300,000 Dth/d, well I could add tons more. I could add a big, major project, but I don’t want to be the son of NED, or the daughter of NED, as the case may be. I bring these volumes up. These are doable volumes for us for new compression,” Armstrong said. “If I get beyond that, then it gets to be a bigger build, gets to be more difficult.”

“New England has a peaking gas issue, not a baseload issue in the near- to mid-term. Even with the current pipeline expansions, LNG has an important role in meeting peak demands,” Cahill said. “Pipeline expansions really supply LDC baseload and heating requirements, and LNG provides necessary flexibility to meet LDC peak loads and power generation needs. The use of LNG as a peaking fuel is hindered not so much by global gas markets but by flawed domestic markets.”

New England has total LNG storage of 20 Bcf, Cahill said, capable of meeting as much as 40% of gas demand on peak days.

Though it strained New England’s existing infrastructure, the 2013/2014 winter was not as much of an outlier as it is commonly portrayed, at least from a regional perspective, according to Cahill.

“We hear all the time people talking about the winter of 13/14, so I’d like to just put it in perspective and go back and look at what happened. The winter of 13/14 was really not that much different from a usual winter in New England. What was different is that the cold impacted the entire East Coast, and that led to supply constraints all across the area,” he said. “…In 13/14, we were at 42 days of gas needed above [available pipeline capacity excluding Maritimes & Northeast] for a total of 7 Bcf, which could have been supplied by three LNG tankers, if they were ordered.”

Looking at the costs of paying for firm transportation on pipeline expansions, “the forecast for LNG with the oversupplied market we have now and for the foreseeable future makes LNG a very viable, economic and reliable option,” Morrissette said.

Citing an AGT to TETCO M3 basis differential of $0.88/Dth in 2018 and an estimated $1.83/Dth recourse rate for the Atlantic Bridge project, Morrissette said purchasers would be paying a “reliability premium” during the summer months, spending “$1.83 to solve an 88 cent problem, if you’re looking at it from a pure marketing standpoint.”

Cahill said the market should also fill its east-to-west pipeline capacity “to better assess the needs of capacity from the west to the east. New pipelines solve baseload issues. LNG solves peaking problems.”