The two hottest oil and natural gas basins in the United States, the Permian and Williston, are both working through similar bottlenecks and constraints on their respective midstream infrastructure systems, according to North Dakota’s leading oil and gas regulator. 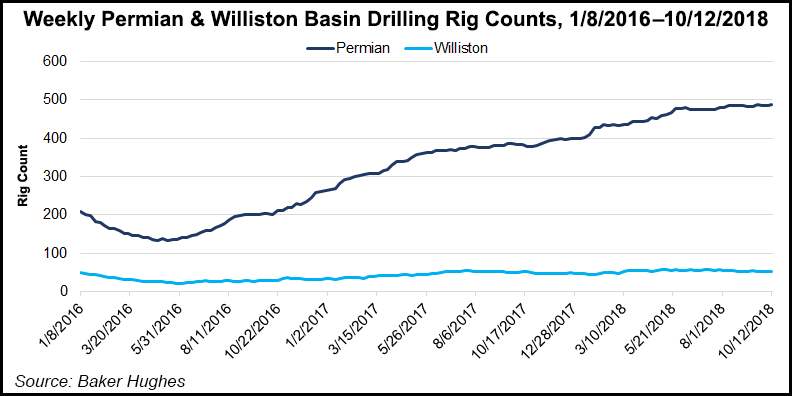 “The Permian, of course, is the big dog in this fight,” said Department of Mineral Resources Director Lynn Helms. “The Permian is starting to experience all of the things the Bakken has already experienced; their oil and gas export pipeline capacity is full, and their saltwater handling capacity is nearly full, so we’ve seen the rig count there pretty much go flat, or slightly declining.”

“In the Permian, they will be able to build stuff during the five to seven months that we cannot, so it is easier to deal with the constraints when you’re closer to the Gulf of Mexico and you don’t have winter,” he said.

These distinctions have potential financial impacts as North Dakota Gov. Doug Burgum alluded to at a recent petroleum conference, Helms said. He added that there is particular sensitivity to anything that would chase drilling, hydraulic fracturing or gas capture capital out of state.

“That’s a metric that everything we talk about is going to be judged by,” he said. “That question will be asked with every proposal we put out there.” Helms added that he will make a recommendation on the state’s gas capture program later this month for state Industrial Commission review.

North Dakota officials and oil and gas operators are bullish about the Bakken’s future, and Helms noted that the upcoming revised U.S. Geological Survey (USGS) in the state in 2020 should increase the estimate of the area’s long-term potential. Helms said state geological survey professionals are preparing data that can be used by the USGS researchers.

Helms said Bakken wells are currently three times more productive than they were the last time the USGS did its survey in the state. “I think you can expect an overall net increase in reserves.”