Shale-driven consolidation among midstream players continued last week with two separate transactions as operators pursue abundant growth potential in building the infrastructure it will take to get more natural gas and oil to market. 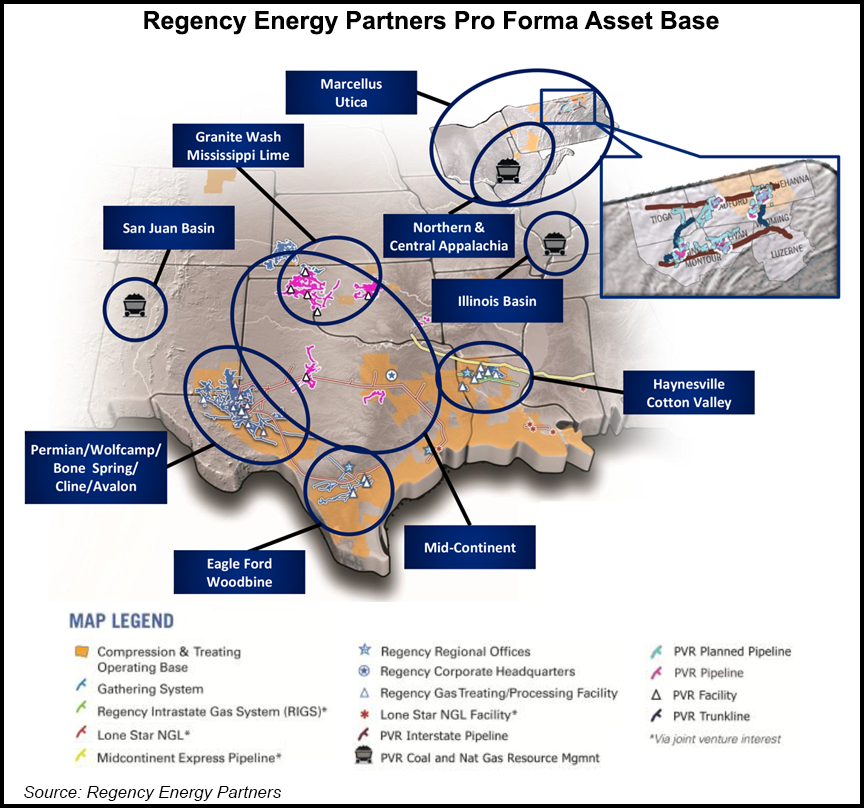 Regency Energy Partners LP plans to buy PVR Partners LP in a $5.6 billion deal (including $1.8 billion of debt) to create a gas gathering and processing giant with a presence in Appalachia, West Texas, South Texas, the Midcontinent and North Louisiana. Separately, Crestwood Midstream Partners LP said it is buying privately held Arrow Midstream Holdings LLC for $750 million, expanding its focus in the Bakken Shale and building on its just-completed merger with Inergy Midstream.

“This acquisition enhances our overall geographic diversity by providing Regency with a strategic presence in two prolific producing areas,” the Marcellus and Utica shales in the Appalachian Basin and the Granite Wash in the Midcontinent region, said Regency CEO Michael J. Bradley of the deal to buy PVR. “These are tremendously complementary businesses…”

“…[I]n an industry where size and scale are becoming increasingly important, the combined company will be a top-15 MLP when measured by enterprise value…” Bradley said. “This transaction materially increases Regency’s weighting toward its core gathering and processing [G&P] business. In particular, 73% of the combined company’s growth capital expenditures in 2013 will be G&P focused and will be underpinned largely by fee-based cash flows.”

The addition of PVR’s assets in Appalachia and the Midcontinent to Regency’s footprint in the Permian Basin, South Texas and North Louisiana puts the combined company in many of the most economic, high-growth unconventional oil and gas plays in North America: the Wolfcamp, Bone Spring, Avalon and Cline shale in the Permian Basin, the Eagle Ford Shale in South Texas, the Marcellus and Utica shales in Appalachia, the Granite Wash in Oklahoma and Texas and the Haynesville Shale and Cotton Valley formation in North Louisiana, Regency said.

The transaction is to be unit-for-unit plus a one-time cash payment to PVR unitholders and is expected to close in the first quarter. The combination builds on Regency’s fee-based cash flows and is expected to be slightly dilutive to 2014 distributable cash flow (DCF), but it is not expected to affect anticipated cash distribution growth in 2014. The enhanced scale, balance sheet strength and diversification are expected to provide substantial earnings before interest, taxes, depreciation and amortization (EBITDA) and DCF growth over time, Regency said.

The acquisition better positions the combined company to capitalize on the long-term growth momentum of North American gas production through incremental, high-value expansions around its core asset base, as well as other growth and acquisition opportunities, Regency said. “The combined company will also benefit from the addition of a growing fee-based asset portfolio, with all the Marcellus and Utica margin coming from fee-based contracts.” The acquisition also provides Regency with an expanded talent base.

Fitch Ratings placed its ratings for Regency on Rating Watch Negative following announcement of the deal, reflecting the negative initial impact the transaction is expected to have on its credit metrics. “Additionally, Fitch believes PVR to be a higher business risk entity relative to RGP, due to the smaller size of its operations, higher leverage, and negative coal industry fundamentals,” it said.

“On a positive note, the transaction significantly increases RGP’s [Regency] size and scale, which are critical components toward successfully operating MLPs, providing more diversified cash flows along with opportunities for growth. Additionally, the transaction provides strategic benefits from a geographic perspective in not only getting a significant foothold in the growing Marcellus region but also providing Midcontinent assets that are complementary to RGP’s existing operations.”

Holders of PVR common units, Class B Units and Special Units will receive 1.020 common units of Regency for each PVR unit held. In addition, PVR unitholders will receive a one-time cash payment at closing estimated to be $40 million in the aggregate. The consideration to be received by PVR unitholders is valued at $28.68 per common unit, representing a 25.7% premium to the previous closing price and a 24.8% premium to the volume-weighted average closing price of PVR common units for the 10 trading days preceding the deal’s announcement.

During a conference call Thursday with financial analysts, Robert G. Phillips, CEO of Crestwood’s general partner, said Arrow was being picked up “at a very attractive multiple of 10 to 10.5 times 2014 EBITDA…Other transactions in the area have been completed at much higher multiples; we’re aware of that. We were in the right place at the right time to make this transaction. We think we were uniquely positioned as a buyer, and we think that is the reason for the very attractive acquisition multiple.”

Phillips stressed that there is “a significant amount of growth left in the Bakken Shale.” Arrow’s business is in the core of the core of the Bakken, he said. “This is a great crude oil-enriched gas gathering business that we’re acquiring from Arrow…”

The Arrow gathering systems are anchored by long-term, primarily fee-based, contracts with producers that have dedicated more than 150,000 acres to Arrow including more than 1,000 potential drilling locations on the acreage. Customers are “world-class shale developers” that have substantial development programs on the dedicated acreage and have identified the Bakken Shale as a significant driver of their future production growth, Crestwood said.

The contracts provide for fixed-fee gathering services with annual escalators for crude, natural gas and water services. There are currently eight drilling rigs running in the area of dedication with additional rig activity in areas adjacent to the system, Crestwood said.

“We believe this transaction is a strong first step in executing Crestwood’s growth strategy following our recently closed merger with Inergy [see NGI, May 13],” said Phillips. “We’ve already largely completed our integration of Crestwood and Inergy, so this additional business will be an easy fit for the new Crestwood. It will be an easy integration with our existing COLT Hub operations. I really provides incredible synergies with COLT,” which Inergy had acquired in 2012.

“We are keenly focused on growing our crude oil and NGL [natural gas liquids] businesses,” Phillips said. “After the close of this transaction, we will be one of the largest Bakken midstream service providers, servicing approximately 18% of current total Bakken crude oil production. Nationwide, we will be handling over 470,000 b/d of crude oil and NGLs in addition to over 2 Bcf/d of natural gas through our gathering systems and transportation assets.”

Bill Gautreaux, president of Crestwood’s liquids and crude oil business unit, told NGI the company has more than $1 billion of capital spending planned over the next couple of years, primarily associated with gathering and processing in the Marcellus and Niobrara.

The Arrow system is being expanded to capture currently flared associated natural gas. The project is expected to be “substantially complete” during this quarter. “Thereafter, the systems will be primarily built-out with modest organic capital requirements of approximately $80 million over the next 18 to 24 months to reach targeted operational throughput capacities of 125,000 b/d of crude oil, 100 MMcf/d of natural gas, and 40,000 barrels/d of water,” Crestwood said.

Capturing the additional flared gas is important in two respects, Phillips told analysts, as it gives producer customers better overall economics and assures regulators and area Native American residents “that we’re dealing with environmental compliance and that we’re working hard and aggressively to comply not only with regulations but to protection the people and the environment here on the reservation.”

The acquisition is to be accomplished through Crestwood Arrow Acquisition LLC. The transaction is expected to be immediately accretive to Crestwood’s estimated distributable cash flow per limited partner unit in 2014, with growing accretion thereafter. Closing is expected by the end of the year.