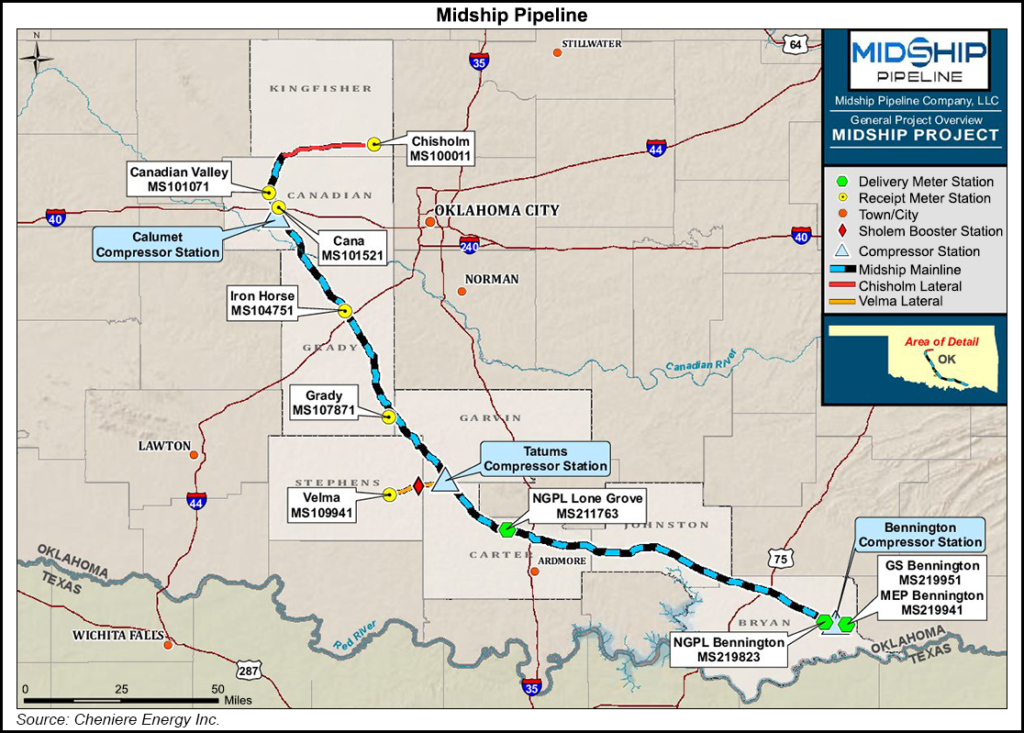 Affiliate Midship Pipeline Co. LLC said in March that construction was complete and requested to place the 200-mile system in Oklahoma online by April 17. The Federal Energy Regulatory Commission granted the request last week and Midship began scheduling volumes Monday for gas day April 21 for all receipt and delivery points except Iron Horse and Velma, which are due to come online April 24 and April 28, respectively.

Service officially began on Tuesday with total nominations of 182 MMcf/d, according to Genscape Inc., which added that Wednesday nominations were slightly higher at 190 MMcf/d. Genscape said firm contracts don’t take effect until May 1, and Midship would schedule interruptible service likely to result in similar flows until then.

Genscape said there are no drilled but uncompleted wells in the Midcontinent awaiting Midship service and production isn’t expected to increase as the pipeline starts up, “especially in the current economic environment, with the record-breaking drop in oil prices on April 20 and producer announced shut-ins.”

U.S LNG exports are also likely to face pressure in the coming weeks and months as the spread between the country and key markets in Asia and Europe has continued to narrow and squeeze offtakers’ margins. Feed gas deliveries fell to 7.6 Bcf/d on Tuesday, according to NGI’s U.S. LNG Export Tracker, their lowest point since mid-March, but it’s difficult to tell whether such declines are due to economics or other issues such as maintenance. Volumes bounced back above the 8 Bcf/d mark on Wednesday.