Oil and natural gas activity in the Midcontinent expanded moderately in the final three months of 2020, but it still lagged year-ago levels, according to a survey by the Federal Reserve Bank of Kansas City. 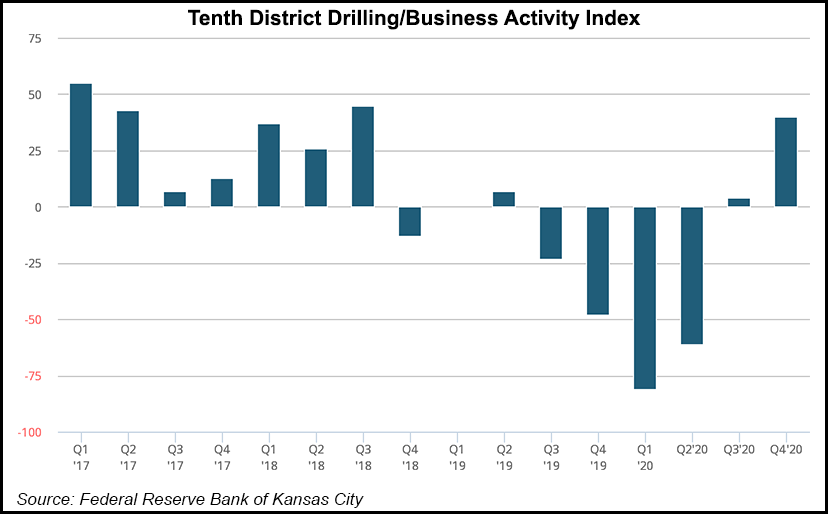 Energy operators also said they need West Texas Intermediate (WTI) oil to average $56/bbl “for a substantial increase in drilling to occur.” Henry Hub natural gas needs to average $3.28/MMBtu, the executives said in the Tenth District survey by the Kansas City Fed, as it is known.

“The drilling and business activity index rose significantly from 4 to 40,” economists said. “Total revenues, profits, employee hours, and wages and benefits indexes rebounded back into positive territory. However, employment and access to credit indexes remained negative, indicating contraction in 4Q2020.”

Indexes remained negative in the final quarter, similar to the year-earlier activity, economists noted. The year/year drilling and business activity index moved to minus 60 from minus 71.

“Indexes for employment, wages and benefits, and access to credit declined at a faster rate in the fourth quarter.  On the other hand, the indexes for total revenues, capital expenditures, delivery time, profits and employee hours were less negative than last quarter.”

Meanwhile, the “expectations indexes” increased, jumping into positive territory for the first time since 1Q2019.

“The future drilling and business activity index was 26, up from 0 in 2Q2020 and 3Q2020, indicating more firms expected energy activity to expand,” said economists. “The future total revenues and total profits indexes rose substantially, and expectations for capital expenditures, wages and benefits, and access to credit also expanded.

According to the firms responding, the average oil price needed was $56, with a range of $45 to $80/bbl.

“This average was higher than prices needed to substantially increase drilling in 2Q2020, but still lower than prices for the past several years,” according to economists. While the average gas price needed was $3.28, responses to ramp up activity ranged from $1.50 to $4.50.  Executives also were asked what they expected oil and natural gas prices to be in six months, one year, two years and five years. Overall, expected prices were higher than previous price expectations in 2020.

“In contrast, 42% of firms did not have one of the plans listed to curb emissions or reuse water,” the survey noted. “Regardless of environmental plan, 86% of firms anticipated higher regulatory costs in the upcoming year.”

Oil and gas executives offered their take on the sector in their responses.

“Covid-19 and the spring of 2020 price war has accelerated a decline in U.S. shale production growth,” said one. “Covid recovery and resulting demand growth coupled with ordinary demand growth will increase pressures on supply.”

Regarding natural gas, one executive said current U.S. activity “will not provide enough volume to meet post-Covid-19 demand recovery. Over time the demand will be met, returning price to current levels.”

Said another, “We will have a quick turnaround in the economy once the vaccine is widely distributed.”