Matching economic indicators across the nation, the Federal Reserve Bank of Kansas City said energy activity during the first three months plummeted at a steep pace, with few expectations that future activity would be better. 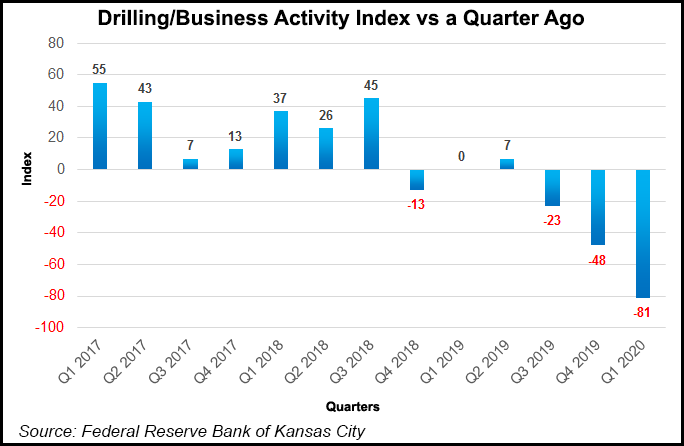 The quarterly Energy Survey of the Tenth District by the Kansas City Fed, as it is known, provides a snapshot of how exploration and production (E&P) and oilfield services (OFS) operators are doing in Colorado, Kansas, Nebraska, Oklahoma and Wyoming, as well as the western third of Missouri and the northern half of New Mexico.

“District energy activity fell sharply during the first quarter of 2020, with our index dropping to its lowest level since we began the survey in early 2014,” said Oklahoma City Branch executive Chad Wilkerson. “Expectations for future activity also fell to their lowest level since late 2014, as most firms do not expect energy prices to return to profitable levels this year.”

The data compiled responses by E&P and OFS executives between March 16 and March 31 using total firm activity regarding changes in drilling, capital spending and employment.

As is usual, economists also posed questions to the respondents. Executives were queried about what prices would be needed for drilling to be profitable.

The first quarter survey offered little optimism among those queried.

“The drilling and business activity index fell from minus 48 to minus 81, the lowest reading in survey history (since early 2014), indicating a continued, deep decrease in activity,” economists said. “The revenues and profits indexes fell sharply to levels last seen in 1Q2015.

Indexes for employment and employee hours also decreased significantly, and the wages and benefits index turned negative. Additionally, the indexes for supplier delivery time and access to credit turned even lower.

“The future drilling and business activity index worsened from minus 16 to minus 78, the weakest outlook for activity since 4Q2014.” Meanwhile, indexes for future capital spending, delivery time, profits, employment, employee hours, wages/benefits and access to credit decreased again.