After waffling just a couple of cents below the previous day’s settle for much of the morning — and even moving into positive territory — the latest weather models provided enough confirmation in milder mid-November trends for natural gas market bears to officially claim victory, for Wednesday’s battle at least. November Nymex futures settled at $3.166, down 4.6 cents on the day. December fell 5.6 cents to $3.227, and the winter strip (November-March) dropped 5.4 cents to $3.174. 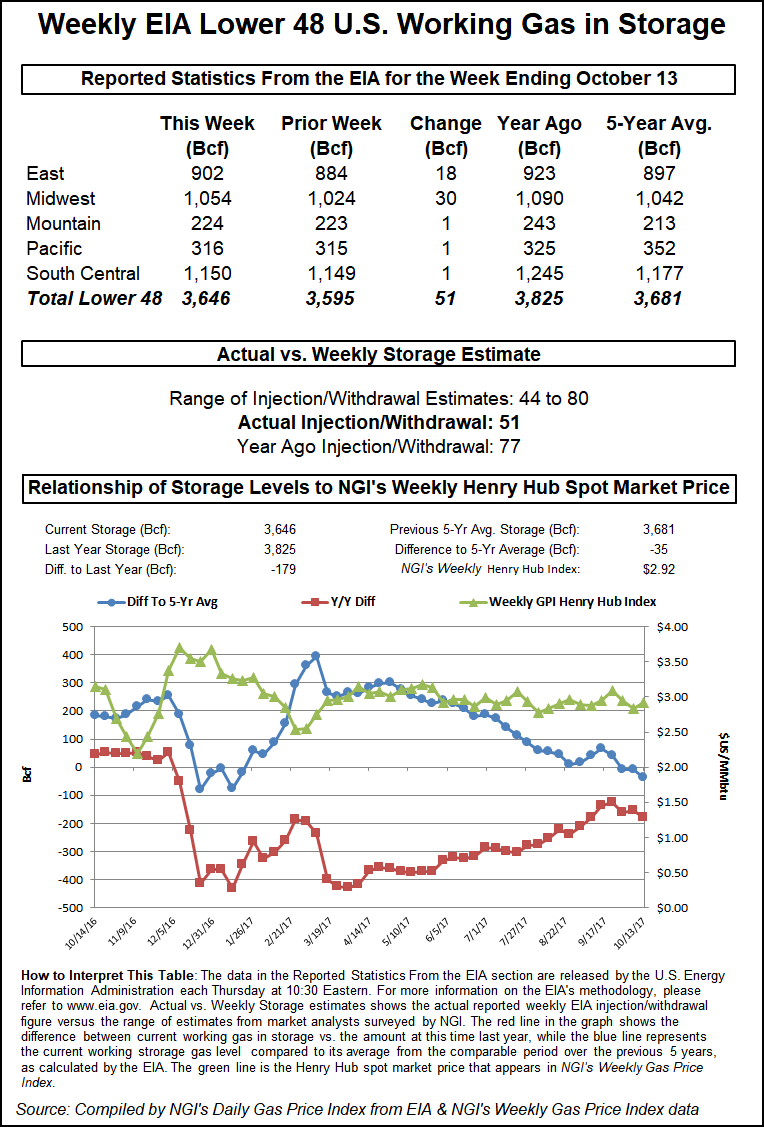 Spot gas prices continued to strengthen in the Midwest, Appalachia and parts of the Northeast, where back-to-back cold fronts have begun moving into the region, while Rockies and Permian Basin prices eased. The NGI Spot Gas National Avg. rose 4 cents to $3.375.

The midday weather data remained mixed, with some days a touch cooler and some a touch milder, nearly offsetting, according to NatGasWeather. Overall, the data favored a cooler-than-normal national pattern in terms of daily heating degree day (HDD) totals through Nov. 1 or 2, then a milder pattern Nov. 3-8 where cool shots would be focused over the central United States with only minor cooling into the East, if at all, the forecaster said.

Even with milder weather on tap for early November, there should still be enough demand to only allow a minor improvement in storage deficits, the firm said. It expects deficits to remain above 625 Bcf after the next two weekly storage reports are expected to print under five-year averages.

Estimates for Thursday’s Energy Information Administration (EIA) weekly storage report were wide ranging, although most projections clustered around an injection in the low 50s Bcf. A Reuters poll of 18 market participants had a range of 39 Bcf to 65 Bcf, and a median build of 51 Bcf. That build compared with a year-ago build of 63 Bcf and a five-year average build of 77 Bcf for the corresponding period.

A Bloomberg survey of 14 market participants had a range of 39 Bcf to 66 Bcf, with a median build of 51 Bcf. Kyle Cooper of IAF Advisors expected a 58 Bcf injection, while EBW Analytics projected a 43 Bcf injection.

Last week, the EIA reported an 81 Bcf injection in storage inventories, which lifted gas stocks to 3,037 Bcf, 601 Bcf below year-ago levels and 605 Bcf below the five-year average.

Low contract spreads between the Nymex prompt month and January 2019 have contributed to the lowest storage trajectory since 2005, according to EBW. That spread has averaged 23.7 cents since the beginning of April, the second-lowest average spread since 2013. The spread has narrowed considerably over the course of the injection season, shrinking from nearly 40 cents to only 14 cents as of Tuesday (Oct. 23).

“With low contract spreads, the Nymex forward curve has not been encouraging gas marketers to inject gas for the winter,” EBW CEO Andy Weissman said.

Lower storage inventories in turn present increased upside price risk in the event of an extremely cold winter or production freeze-offs, “although this would require a very significant cold shift relative to current forecasts,” he said.

Building storage deficits heading into the withdrawal season — with inventories already at a 10-year low — may help limit downside potential for bulls in the near term. The most likely scenario is for continued range-bound trading in the near term, EBW said.

“That is the highest amount of capacity on outage since May 2016,” Genscape senior natural gas analyst Rick Margolin said. “…As a result of many plants having entered early maintenance, we should start to see the return to market of several plants in the coming days.”

Wednesday’s capacity outage was down 0.5 GW from Monday’s peak, according to Genscape. There were 28 total units offline or operating at reduced capacity as of Wednesday. “Of these, 18 have been down for 30 or more days, which would suggest they are nearing the end of their maintenance cycle,” Margolin said.

Collectively, the return of these 18 plants would restore 18.6 GW of nuclear generation capacity, according to Genscape. On an assumed one-to-one gas-burn replacement, this is roughly the equivalent of 2.6 Bcf/d of gas demand, “though actual replacement is much lower given loads are lower this time of year and other fuels are contributing to regional stacks,” Margolin said.

Production continues to be another bearish factor influencing the market. EBW said gas production remains poised to jump higher over the next several weeks as producers in Appalachia continue to fill newly available pipeline takeaway capacity.

“Many producers, particularly in the Northeast, have also exhibited a penchant for ramping up output ahead of the winter heating season, when demand and prices reach an annual high,” Weissman said.

Spot gas price increases continued on Wednesday for markets in the eastern United States as a reinforcing cool shot was set to cover the Midwest, Mid-Atlantic and Northeast in the next few days, keeping demand stronger than normal, according to NatGasWeather.

A second reinforcing cold shot was expected to follow across these same regions this weekend and into early next week, “although not quite as chilly as some of the data suggested to open the week,” the forecaster said.

Texas, meanwhile, was expected to continue seeing hurricane remnants from Mexico, which were then expected to track into the Southeast and up along the East Coast late this week with “flavors of a Nor’easter” from areas of rain and gusty winds, NatGasWeather said. The West was forecast for mild to warm weather into next week because of upper high pressure, with daytime temperatures expected in the 60s to 80s.

The mild weather in the West was likely the culprit in Wednesday’s declines across the Rockies. Most pricing points fell less than a dime but Northwest Sumas plunged $1.39 to $6.20, still easily the highest price across North America and besting second-place SoCal Citygate by nearly $2.

Permian Basin pricing remained soft as well from the mild weather in and around the region, in addition to planned maintenance on the Transwestern Pipeline that was also limiting flows. Although that work was expected to end Thursday, the pipeline on Wednesday warned shippers that other restrictions could be put in place later in the day.

In a notice on its website, Transwestern said it was concerned about the performance of the Agave Rojo Banco POI 79028 location, which was averaging about 50,000 MMBtu short for the day at the time of the notice. “If performance has not improved during the current gas day, Transwestern may limit volumes to actual on the indicated location for Intraday 3. This could result in reductions to the shipper and/or pooler nominations delivering gas at this location, or from the pooling area in which these locations lie,” Transwestern said.

Increases in the Midwest were more muted as most pricing hubs rose less than a nickel. Chicago Citygate spot gas climbed 4 cents to $3.525.

On the pipeline front, a force majeure on Natural Gas Pipeline Company of America (NGPL) was expected to cut at least 280 MMcf/d of northbound flows through Segment 10 for the next week. NGPL shut down its Compressor Station (CS) 102 in the Oklahoma panhandle because of horsepower issues, according to a notice on the pipeline’s website.

NGPL’s initial estimate for the end date of this unplanned maintenance was next Wednesday (Oct. 31). As a result, the scheduling constraint point of CS 103, the junction between Segments 10 and 11, would have its operating capacity reduced to 68% of maximum daily quantity (MDQ.)

“The previous month-to-date flow through this constraint point was 1,057 MMcf/d, and today’s initial cycles showed an operating capacity of 777 MMcf/d, translating to an expected reduction of at least 280 MMcf/d,” Genscape natural gas analyst Joe Bernardi said.

Later Wednesday, NGPL declared another force majeure that would limit its throughput capacity eastbound into Segment 15 in the Texok Zone (CS 801.) The scheduling constraint would be at CS 801 in Carter County, OK.

Effective for gas day Friday and continuing through gas day Saturday, NGPL said it would schedule primary firm and secondary in-path firm transports to no less than 44% of contract MDQ through CS 801.