Four Mid-Atlantic and New England states, along with 40 energy companies, have partnered to propose a regional hydrogen hub development as various parts of the country seek to secure federal funding. 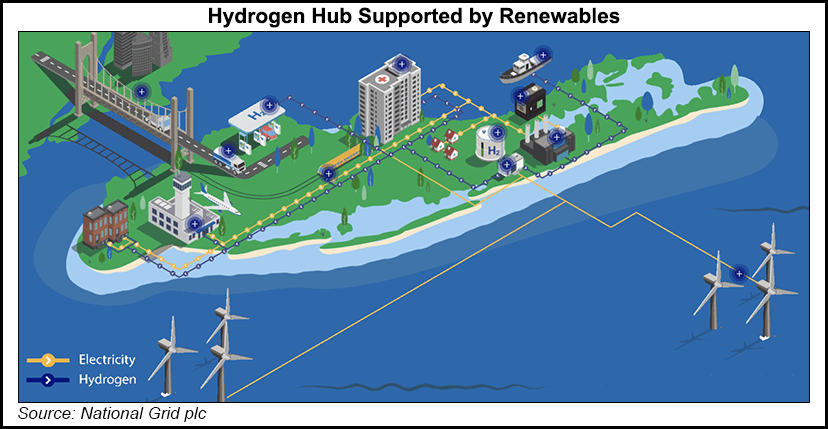 The governors of Connecticut, New Jersey, New York and Massachusetts said they would pursue $8 billion in federal funding provided through the Department of Energy (DOE). The funding would focus on developing four regional hydrogen hubs that were approved in the Biden administration’s Infrastructure Investment and Jobs Act.

New York is leading the consortium, as the New York State Energy Research and Development Authority (NYSERDA) develops “a proposal in response to” the DOE’s funding announcement, a NYSERDA spokesperson told NGI. The proposal is “anticipated to launch in May 2022 with $8 billion in funding available.”

Together, the states and energy companies want agreements to perform research and analyses to quantify greenhouse gas (GHG) emissions reductions.

The NYSERDA spokesperson told NGI that states involved would continue to “seek additional public and private partners in the region and focus on coordinating the regional fuel cell innovation ecosystem.”

The consortium also plans to integrate offshore wind and solar photovoltaics into hydrogen production. The hydrogen produced would be put to use in transportation, heavy industry, power generation and maritime applications.

Under New York’s Climate Leadership and Community Protection Act, the state is aiming to achieve zero-emission electricity generation by 2040. The goal is to achieve 70% renewable energy generation by 2030 and economy-wide carbon neutrality. New York also plans to reduce GHG emissions by 85% from 1990 levels by 2050, in addition to reducing on-site energy consumption by 185 trillion British thermal units by 2025.

Under the Climate Act, New York noted that it has invested more than $33 billion into 102 renewable and transmission projects; $6.8 billion to reduce building emissions; $1.8 billion to increase solar generation; and is committed to developing more than 9 GW of offshore wind by 2035.

Connecticut’s climate measures include the Global Warming Solutions Act to reduce GHG emissions 80% by 2050. Massachusetts is aiming for carbon neutrality by 2050, while New Jersey’s Global Warming Response Act targets GHG reductions of 80% by 2050.

“The urgency of climate change and the implementation of our net-zero by 2050 strategy requires a comprehensive approach, which includes the research and deployment of technologies that will allow more cost-effective clean energy in the future,” said Massachusetts Gov. Charlie Baker.

The announcement of the hydrogen hub “is a critical step for regional collaboration in integrating this clean energy resource into our existing climate strategy,” said Baker.

Colorado, New Mexico, Utah and Wyoming in February became the first states to announce they would jointly apply for the DOE regional hydrogen hub funding.