Natural gas futures managed to hold onto early gains midweek despite little change in fundamentals. The May Nymex gas futures contract traded in a nearly 10-cent band before settling Wednesday at $2.520, up 6.4 cents day/day. June picked up 6.1 cents to reach $2.597. 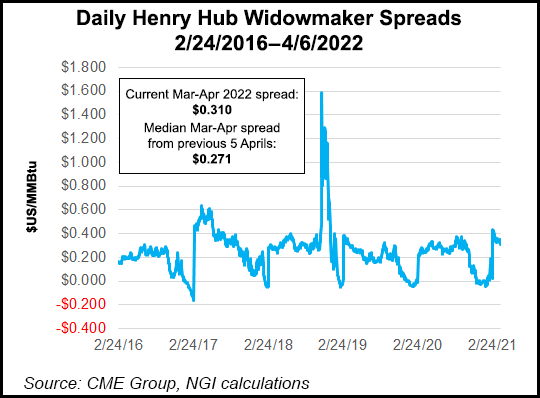 After some stubborn technical resistance came into play on Tuesday, the prompt month climbed early on Wednesday after the Global Forecast System model gained 10 heating degree days on further colder trends for April 14-20, putting it in better agreement with the European data, according to NatGasWeather. Both models see more impressive cold shots sweeping across the eastern two-thirds of the country for stronger demand for that period.

“Of course, the pattern the next seven days before then is about as bearish as it gets, with national demand exceptionally light for this time of the year due to very limited coverage of subfreezing air,” the forecaster said.

How long the projected cooler-than-normal pattern seen for April 14-20 lasts is now of great interest, according to NatGasWeather. The GFS and the European model see cool eastern United States air slowly fading April 21-24, although changes are likely given the long lead time.

Bespoke Weather Services said it views the cooling as likely “limited” in terms of duration. The pattern, according to the forecaster, may tilt back to the warmer-than-normal side toward the end of the month.

Bespoke said there were only minor changes in production and liquefied natural gas (LNG) volumes early Wednesday, and power burns remained marginally stronger on a weather-adjusted level than they had been previously. However, burns were still weak, overall.

The forecaster said it was “neutral” as far as price action in the near term, given some “marginal improvement” in the data over the last couple of days. However, cash prices have been “very weak” and that would need to change to stimulate any sustainable move higher.

“It is possible that burns continue to gradually strengthen as well if prices remain under the $2.50 level,” Bespoke said. The latest storage report from the Energy Information Administration (EIA) is Thursday, “which has been a very difficult guessing game over the last few weeks.”

That compares with an increase in inventories of 30 Bcf during the same week a year ago and a five-year average injection of 8 Bcf, according to EIA.

In the latest Short-Term Energy Outlook (STEO) released on Tuesday, the EIA said Lower 48 storage inventories exited March at close to 1.8 Tcf, 2% below the five-year average. Total gas withdrawn during the 2020/21 winter surpassed the five-year average “largely as a result of the cold February temperatures that occurred amid low natural gas production,” the agency said.

A combination of rising production and lower consumption in the power sector compared to the previous two summers should see injections outpace the five-year average in 2021, according to EIA. The agency expects inventories to end October at 3.7 Tcf, in line with the five-year average.

Interestingly, the so-called widowmaker spread between the March and April contracts in 2022 stood at 31 cents on Tuesday. This compares with a median of 27.1 cents for the previous five years, and indicates that traders are a bit more bullish than normal for the next winter season.

The STEO also outlined the EIA’s views on the trajectory of prices, which takes into account LNG demand. EIA said it expects U.S. exports to average around 7.6 Bcf/d in the second quarter, then average 7.66 Bcf/d in 3Q2021 and 9.26 Bcf/d in the final three months of the year.

EBW Analytics Group LLC said the EIA figures for 2Q2021 appear “vastly too low.” In the firm’s most likely scenario, LNG demand sinks below 11 Bcf/d in May and holds at that level through October, but then recovers back to near 12 Bcf/d by November. With the additional 624 Bcf of demand, the STEO’s end-of-October storage trajectory would fall to just 3,125 Bcf.

“As a result, while the STEO natural gas price forecast for May 2021-March 2022 already implies a 34.6-cent (11.3%) premium to the Nymex strip as of Tuesday’s close, this bullish outlook understates the long-term upside potential for natural gas futures,” EBW said.

Spot gas prices were mixed on Wednesday even though weather across the country is forecast to be seasonally mild through early next week.

NatGasWeather said upper high pressure would continue to rule, but there would be locally cool areas. For example, a weather system was set to exit the Plains on Wednesday, then track across the Great Lakes through Thursday.

“But with highs of upper 50s to lower 70s over most of the northern and interior U.S., and 70s and 80s over the southern and eastern U.S. besides hotter 90s over Southwest deserts, demand will be exceptionally light,” the forecaster said. “Additional weather systems will follow this weekend into next week, although they’re also quite mild and with little to no subfreezing air.”

Solid gains also were seen in California, where SoCal Citygate jumped 20.0 cents to $3.125.

Interestingly, PG&E Citygate moved against the pack, slipping 2.5 cents day/day to average $3.550 amid some pipeline maintenance and operational restrictions.

AccuWeather said Wednesday California only received about 50% of its average precipitation during the 2021 water year, tying for the third driest on record. The snow survey by the Department of Water Resources recorded a snow depth of 49.5 inches and a snow water equivalent, which measures the amount of water contained within the snowpack, of 21 inches, on April 1. April 1 is typically when snowpack is at its deepest in the state and has the highest snow water equivalent.

“One thing we noticed about this La Niña this year was a large ridge of high pressure over the northern Pacific that steered storms mostly to the north of California,” he said. “The Pacific Northwest did well with precipitation, but farther south, these storms dried out across California.”

The lower-than-normal hydro generation stemming from the low snowpack levels should bode well for gas demand this summer.

Meanwhile, EBW analysts pointed out that California is on track to be potentially short around 4,000 MW by next summer. By 2025, when the Diablo Canyon nuclear plant is scheduled to be retired, the state could face a permanent capacity deficit of at least 7,500 MW.

In response, the California Public Utility Commission ordered procurement of 5.5 GW of wind and solar with back-up battery capacity, 1 GW of long-duration storage and 1 GW of geothermal.

“The decision to retire Diablo Canyon was made nearly five years ago,” EBW said. “The costs of acquiring the needed capacity are likely to be exorbitant and the required time frame almost certainly is too short, creating the potential for huge capacity deficits in the state just a few years from now.”

Elsewhere across the country, Texas spot gas prices were on the rise across most of the state.

In the Midwest, most pricing hubs posted single-digit gains. A similar story played out in the Midcontinent, while Louisiana saw a mix of small increases and decreases.

Columbia Gas in Appalachia posted a 9.5-cent rise in spot gas prices, which averaged $2.035 for Thursday’s gas day. In the Northeast, Algonquin Citygate cash was down 8.0 cents to $1.920.