With modest influence from its still developing Utica-Collingwood Shale play, Michigan’s latest energy appraisal paints a changing picture for natural gas storage and supply-demand dynamics. The one constant is for continuing upward pressures on gas prices. 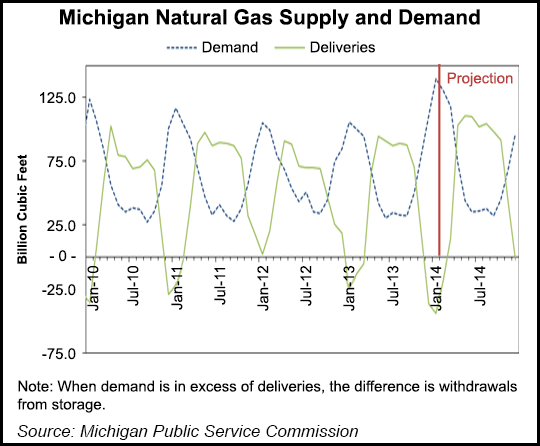 Total annual natural gas sales in Michigan for 2014 are forecast to reach 859.9 Bcf, a 9.7% increase from 2013, Binkley said. “In the residential and commercial sectors, severe winter weather from the polar vortex caused significant increases in demand.”

With gas storage drawn down more than the previous winter, the latest assessment predicted that Michigan storage would be built back by the end of October to 499.4 Bcf (with maximum working capacity of nearly 675 Bcf), compared with last year’s assessment at this time, which called for 612.5 Bcf in storage at the end of October 2013.

“From what we can see, this is primarily due to the weather,” Binkley told NGI on Wednesday. “The combination of home heating and electric generation demands for gas played a part in causing an increase draw on natural gas. As more [summer] data comes in, we’ll have a better idea of what storage is going to look like.”

“Severe cold weather this past heating season (November-March) left storage inventories 12% below the five-year average,” the report noted, adding that in the Lower 48 states storage was nearly 900 Bcf on April 18, 52.9% of the national five-year average for that date.

Michigan receives about 20% of its gas supplies from in-state production sources, although output is declining. At 116.7 Bcf , this year’s in-state production is predicted to drop another 4.3%. However, Binkley pointed out that the decline would be greater if not for some modest production increases from the state’s resources.

The report noted that prices above $4.00/Mcf tend to encourage new production, and the first half of this year the average price is expected to be $4.61/Mcf, compared with $3.95/Mcf at this time last year.

After a milder-than-normal summer in 2013, Michigan is expected to have at least normal temperatures this summer, keeping upward pressure on gas prices, Binkley said.

The mix of supply sources into the state also is changing, he said. With more production from shale and the Rockies Express Pipeline, “Michigan has become less reliant on natural gas from the Gulf of Mexico and Canada.”