Chesapeake Energy Corp. and Encana Corp. representatives are scheduled to be arraigned in a Michigan county district court on March 19 after the companies were formally charged Wednesday for allegedly participating in a criminal conspiracy in 2010 to avoid bidding against each other in a state oil and natural gas auction. 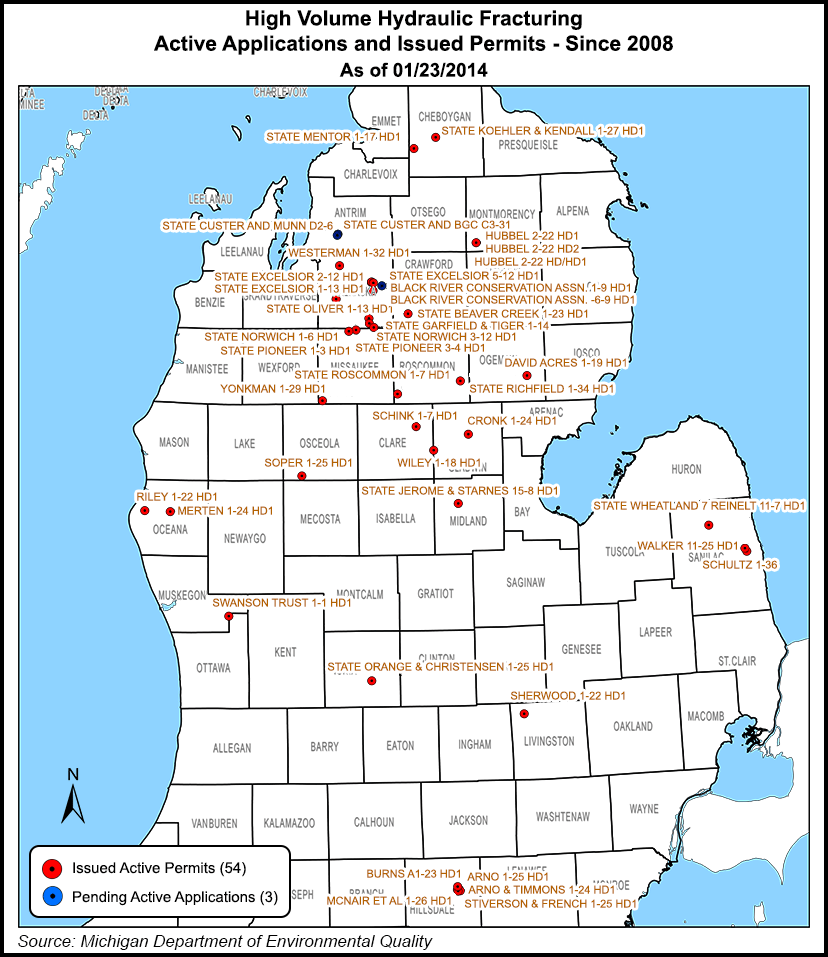 Michigan Attorney General Bill Schuette, who has led the investigation since its inception, said executives of Chesapeake and Delaware-based Encana Oil and Gas USA privately negotiated for state leases auctioned in 2010, which caused auction prices to plummet. Chesapeake and Encana were early entrants into Michigan’s Collingwood Shale.

Public auctions of state-held natural gas and oil leases are held twice a year, in May and in October, by the Michigan Department of Natural Resources (DNR). In the May 2010 auction, Encana and Chesapeake were awarded leases in a sale that netted $178 million to the state in bonus payments, which at the time exceeded projections and broke a record (see Daily GPI, May 10, 2010). The producers also bid in the October 2010 auction.

In 2012, Reuters unearthed a possible conspiracy between executives of the companies, including former Chesapeake CEO Aubrey McClendon, who apparently discussed an agreement via email regarding the May 2010 auction to split up Michigan counties where each company would be an exclusive bidder for both public and private leases in the October 2010 sale (see Shale Daily, June 26, 2012).

“In the five-month period following the state’s May 2010 auction, this alleged conspiracy may have been a key driver behind the state-held lease price in Michigan going from $1,510 per acre in May 2010 to less than $40.00 an acre at the October 2010 auction,” Schuette said. DNR helped the attorney general in the investigation.

“I will aggressively prosecute any company who conspires to break the law,” the attorney general added.

Reuters had reported that McClendon and other Chesapeake executives were concerned about Encana’s pace in the Collingwood Shale. In an email dated June 16, 2010, McClendon apparently told a deputy that it was time “to smoke a peace pipe” with Encana “if we are bidding each other up.” If the dozen or so emails were determined to be accurate, it may be evidence of price fixing, a violation of the Sherman Antitrust Act. Collusion between competitors may result also in wire fraud penalties. The Reuters investigation also uncovered that private landowners in Michigan were targeted by the two producers.

Encana and Chesapeake each face one criminal count each of:

The arraignment is to be in Cheboygan County’s 89th District Court.

The producers also face federal charges of collusion. Chesapeake and Encana had disclosed in 2012 that they had been subpoenaed in an antitrust investigation by the U.S. Department of Justice’s Western District of Michigan in connection with the state lease sales (see Shale Daily, Nov. 7, 2013; Aug. 13, 2012). In addition, the producers and Michigan-based O.I.L. Niagaran LLC last year were named in a lawsuit by a private landowner over the alleged rig bidding (see Shale Daily, Feb. 28, 2013).

The boards of Encana and Chesapeake launched internal investigations following the allegations and each said they found no evidence that collusion had taken place (see Shale Daily, Feb. 21, 2013; Sept. 7, 2012). Encana CEO Randy Eresman, who was running the the company at the time of the Michigan lease sale, resigned in January 2013 (see Shale Daily, Jan. 15, 2013). By the end of January,McClendon also had announced his retirement (see Shale Daily, Jan. 31, 2013). McClendon now helms privately held American Energy Partners LP.