The Mexican government’s plan to “rescue” state oil company PetrÃ³leos Mexicanos (Pemex) is unlikely to succeed, and could indeed prove detrimental to the firm and to Mexico’s economy, according to a new report by the Instituto Mexicano para la Competitividad (IMCO). 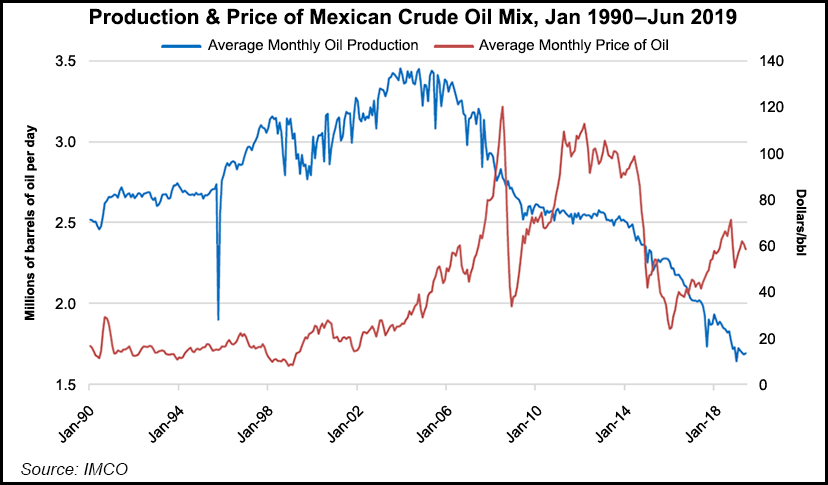 The report highlights that Pemex’s refining and petrochemicals unit, Pemex TransformaciÃ³n Industrial (Pemex TRI), racked up accumulated net losses of 941.7 billion pesos, or about $48.3 billion, from 2009-2018.

A previous IMCO report found that the Dos Bocas project had a 2% chance of creating value for Pemex.

For this to occur, IMCO found, the refinery would have to achieve a utilization rate of 85-100% (Pemex refineries have averaged about 65% over the last five years); its construction time could not exceed seven years; its cost could not exceed $8 billion; its production capacity would have to reach 267,000 b/d; and its margins and operating costs would have to be similar to those reported by the most efficient refiners in North America, whose costs currently “are much lower than those presented by Pemex.”

In May, Pemex scrapped a tender for the project’s construction after none of the invited firms would commit to the $8 billion cost and three-year timeline mandated by the government. Pemex and energy ministry Sener then announced that they would oversee the project themselves.

In the latest report, IMCO said that Pemex should cancel the refinery altogether, and redirect the funds for its construction to the far more profitable business line of exploration and production (E&P).

If the refinery does go forward, it should be established as a separate company from Pemex with its own collective bargaining agreement, the report said, in order to increase productivity and profitability.

Meanwhile, crude oil production, Pemex’s most profitable business, fell by half from December 2003 to June 2019, going from 3.5 million b/d to 1.7 million b/d.

A recent downgrade by Fitch Ratings of Pemex bonds to junk status shows the gravity of Pemex’s situation, IMCO said, adding that if other credit rating agencies follow suit, Pemex could become the largest junk-rated corporate bond issuer in the world.

As part of LÃ³pez Obrador’s plan to rescue Pemex, the government has pledged some $23.5 billion of support from 2019-2023 via capital injections, tax breaks, prepayment of debt and support in the fight against fuel theft by organized criminals.

Pemex is technically bankrupt, IMCO said, noting that since 2009, the company’s outflows have exceeded its income, forcing it to take on increasing amounts of debt.

Calling Pemex “too big to fail,” IMCO said that in 2018 alone, the company transferred 932.8 billion pesos ($47.9 billion) to the government, an amount equal to about 78% of all public spending during the same year.

Therefore, IMCO said, the government is correct in principle that the only viable option for Pemex is to rescue it.

“However, the financial support measures proposed by the current administration must be accompanied by substantial changes in the operation and management” of Pemex, IMCO said.

“If not, we will repeat the history we have observed in previous administrations: injecting resources to a bottomless pit…”

Although Pemex’s latest four-year business plan appears to be “the most ambitious assistance package of the last decade,” it nonetheless “does not truly address the company’s structural deficiencies, nor does it have the sufficient scope to modify Pemex’s trajectory of financial and operational deterioration.”

IMCO is proposing four structural reforms to ensure the long-term viability of Pemex.

These comprise reforming Pemex’s corporate governance to avoid “conflicts of interest between those who dictate energy policy and those who execute it,” an austerity program within Pemex — implemented via a renegotiated collective bargaining agreement with the national oil labor union — the reactivation of risk-sharing upstream joint-ventures with the private sector; and “focusing investment on activities that generate more profitability for the company, such as the exploration and production of hydrocarbons.”

Upstream joint ventures with the private sector are essential for developing Mexico’s unconventional and deepwater hydrocarbons, which account for 61% and 24% of Mexico’s prospective resources, respectively.