Mexico’s largest natural gas transport network, the Sistrangas, is set to overhaul its pipeline tariff regime later this year, according to energy regulators. 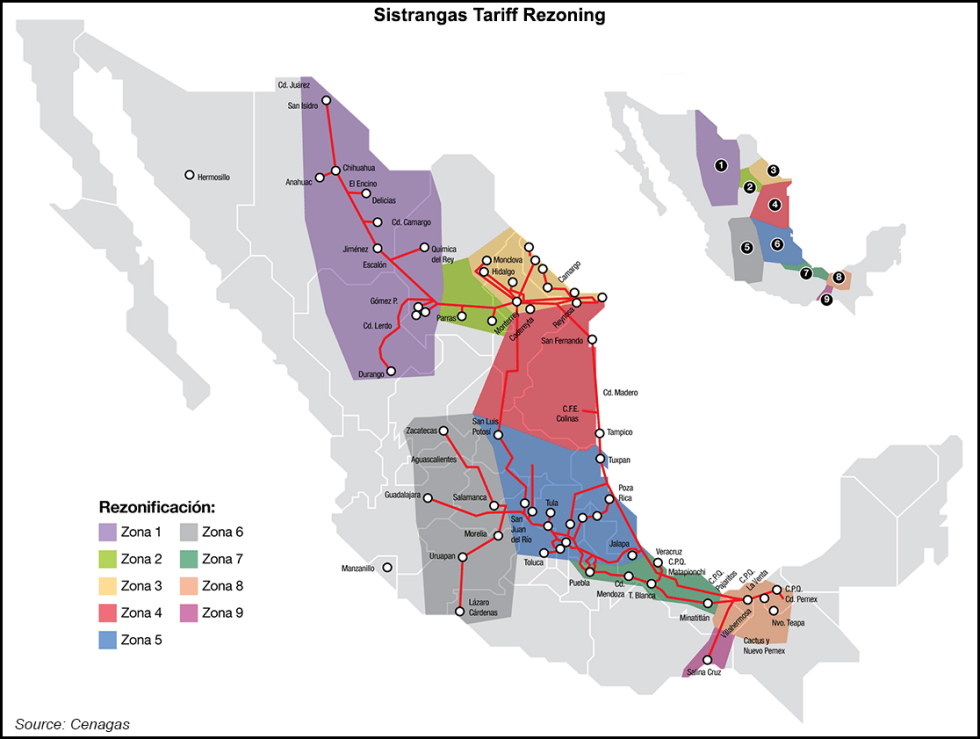 “With the opening of the natural gas market, it has become necessary for Sistrangas users to pay a transport rate based on the distance traversed” when gas moves through the system, CRE said in press release. “The new zoning seeks to reflect with greater accuracy the costs associated with transporting gas between different regions of the national territory.”

The approval comes after the CRE granted Cenagas a one-month extension of its current rates until July 31, so that the operator could finish updating its software for managing nominations, confirmations, daily capacity assignments and billing on the pipeline network.

The new tariffs include an additional two-month transition period in which Cenagas will continue applying the old rates for the six-zone regime until Sept. 30. The new system of nine zones kicks in Oct. 1, along with updated rates that would remain in force until the end of the year.

Cenagas usually revises the Sistrangas rates every six months — once in January and then again in July. The operator charges postage stamp rates that accrue as gas flows from zone to zone on the national system.

The nine zones in the new regime are intended to reflect current commercial and operating conditions on the Sistrangas, Cenagas officials have said. The previous tariff scheme predates the creation of operator and the incorporation of the Los Ramones Norte II pipeline into the system.

“The rates assigned to the nine zones were determined using a methodology based on the costs associated with the distance and capacity reserved in each zone,” according to CRE. “Sistrangas users may be certain that the tariff rezoning will remain in force so long as the technical conditions of the system do not change, allowing shippers to make decisions under conditions of legal and commercial stability and certainty.”

The regulator also said the new tariff regime would help stimulate domestic production of natural gas, which has declined sharply since 2010. Imported gas, mostly from pipelines on the U.S.-Mexico border, currently supplies more than 60% of Mexican demand.

“The tariffs will improve the economic signals for national production near demand centers by reflecting the cost of transporting natural gas within the new zones, including the cost of importing gas,” according to the CRE.

Private pipeline infrastructure connecting the Permian basin in West Texas to consumers in northwest Mexico and farther south is starting to come online — most recently, TransCanada Corp.’s 670 MMcf/d El Encino-Topolobampo project. In the northeast, the 2.6 Bcf/d Sur de Texas-Tuxpan marine pipeline is due in-service by year’s end, which could connect South Texas to central Mexico.

The Sistrangas is comprised of Mexico’s national pipeline system, directly owned by Cenagas, and six private pipelines. The 6,256-mile integrated network spans 21 of Mexico’s 32 states, including the federal district, and has an operating capacity of 6.13 Bcf/d.

Cenagas recently launched the second edition of its market survey. Implemented for the first time last year, the survey solicits nonbinding expressions of interest from shippers to gauge market demand for transport capacity, natural gas storage and other services.

The 2017 study detected demand for 4.62 Bcf/d of firm transport capacity, 17 MMcf/d of interruptible service and 3.68 Bcf of storage. The new survey is to remain open until Aug. 3.