The Mexican Energy Ministry (Sener) is tweaking and clarifying its natural gas storage policy following a public comment period, and it expects to produce a final draft soon. 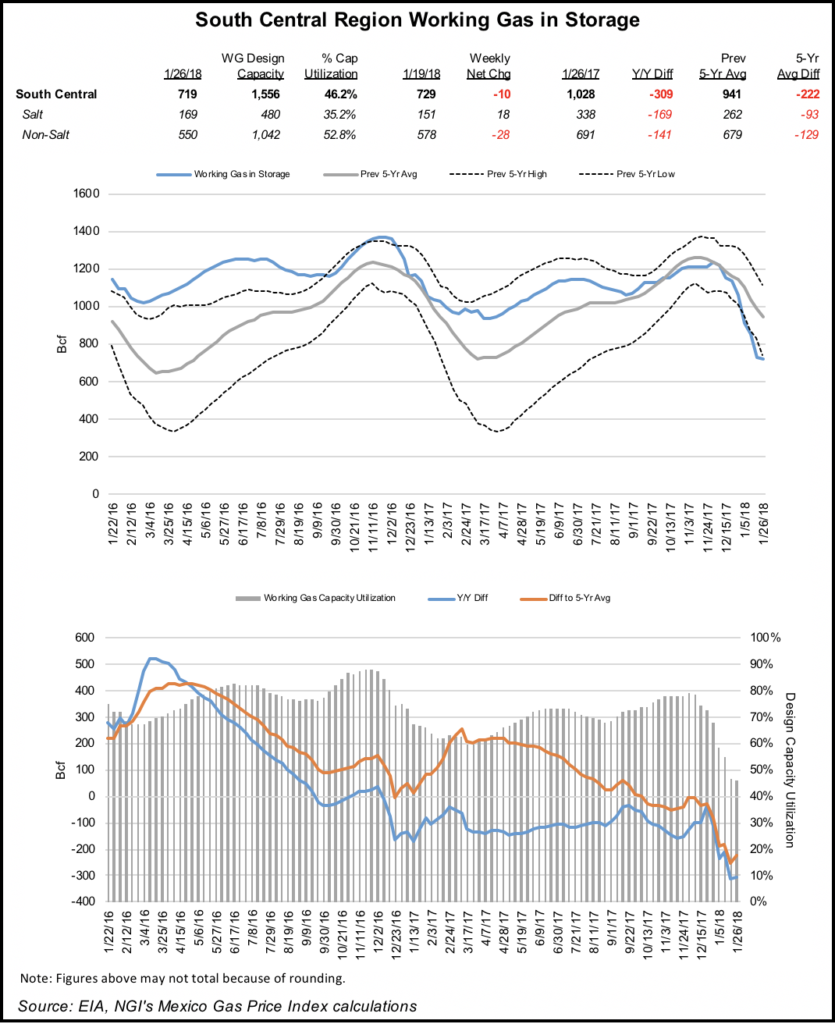 “We got a very good response from the market,” Sener’s David Rosales, director general of natural gas and petrochemicals, told NGI. “We’ve received a variety of questions, comments and requests for clarification.”

He also told NGI that there is no timeline yet for the final document. “We’re looking at a minimum of one month. It won’t take any less time than that.”

The updated policy would mandate that the state-owned operator of Sistrangas, the country’s largest pipeline system, hold strategic inventories of 45 Bcf for supply emergencies. To this end, the Centro Nacional de Control de Gas Natural (Cenagas) is to call for an international public tender later this year to build the first of these inventories.

The public comment period on the policy ended in late January. Rosales said industry feedback included comments on Sener’s broad policy goals and motivations, but also specific queries about the tender. In particular, the questions focused on the legal framework around land use and property ownership at potential project sites and the types of storage technologies permitted in the tender.

“We are going to make clarifications throughout the document,” Rosales said. “Evidently, the most relevant part is Section 5, which outlines in detail the obligations and specific steps to follow for the implementation of our goals.

“Here we will try to be a bit clearer in terms of the nomination process, the responsibilities of Cenagas as well as the companies interested in participating in the tender, and other regulatory elements that participants will need to follow in order to obtain the permits that they will eventually need to build these facilities.”

Sener determined that depleted reservoirs were the best technology for building strategic gas inventories and included in the policy document a list of 15 candidate fields throughout Mexico. Cenagas is expected to nominate the fields for tender in a process that would incorporate industry feedback.

Rosales clarified that the Energy Ministry, with its apparent focus on the reservoirs, does not plan to exclude salt caverns or other storage technologies from the bidding, but rather hopes to level the playing field.

“If we don’t do this, the salt cavern sites [in Mexico] are more advanced in terms of exploration work and this could exclude the abandoned reservoirs, something which we want to avoid,” he said. “But by no means are we trying to leave them out from the competition.”

In the final policy, Sener will also modify the timeline for developing the strategic gas inventories, according to Rosales. However, he added, Cenagas is still expected to hold its first project tender this year, and 2025 remains the in-service deadline for the 45 Bcf of underground storage.

Until then, the policy instructs Cenagas to hold operational inventories at Mexico’s LNG terminals for systemic balancing. The document also outlines reporting obligations for gas market participants, which Sener plans to use to produce a weekly bulletin on gas storage and demand.

The new storage policy is the anticipated companion document to an earlier public policy in which Sener laid out a road map for implementing Mexico’s first competitive gas market.

The earlier document did not directly address the issue of storage, which is of growing importance to the energy industry as the country’s gas pipeline network expands and Mexico increases its reliance on U.S. imports. Currently, around 60% of national gas consumption comes from imports, mostly via cross-border pipeline.

“In such a scenario, where we are gasifying the country by depending on imported gas, it is fundamental that we have storage reserves in Mexico,” Tania Ortiz Mena told NGI. She is executive vice president for development at Infraestructura Energetica Nova (IEnova), the Mexico subsidiary of Sempra Energy.

“I trust that U.S. gas will continue to be abundant” because of unconventional production growth, Ortiz Mena said. “However, this puts Mexico in a very delicate situation when there are supply interruptions. … Any temporary halt in the flow of pipeline imports into Mexico can have severe consequences for the local power grid and industrial sector.”

Once the storage policy is finalized, the Energy Ministry would work with Cenagas and energy sector regulators to evaluate the 15 candidate fields and incorporate them into a data room that would be open for the industry to review.

Other priorities, according to Rosales, include designing regulations and norms needed to implement the storage policy’s goals. Specifically, Sener would have to create market reporting guidelines for the weekly storage and demand bulletin, as well as an “emergency plan” to regulate the use of the strategic inventories.

The energy industry, in turn, may be eagerly awaiting further details on the storage tender scheduled for later this year.

“Everyone I’ve talked to is really excited about the policy and looking forward to seeing the details on the 15 fields that were identified,” EnerGnostics LLC’s John M. Hopper told NGI. Hopper, managing director of the Houston-based consultancy, oversaw several storage and midstream buildouts in the United States. “I think they’ll have plenty of interest in this from the industry. It’s something that’s been needed for a while.”

Once the strategic projects are identified, Cenagas would incorporate them into the next annual update of its five-year Sistrangas expansion plan, due by March. The operator is expected to conduct its first storage tender this year, but it could opt to hold additional auctions in subsequent years to reach the 45 Bcf mandate.

The policy establishes that the strategic inventories must provide full coverage for Sistrangas and its interconnected private pipeline systems, with at least one facility in each region that requires storage services. Sistrangas is currently organized into six tariff zones, which means that Cenagas could hold up to six separate tenders.

However, “there could an argument for leaving out, for example, the Istmo zone [in southern Mexico] given that it could be served by an adjacent zone,” Rosales said. “Or there could be more than one tender in the same zone.” Cenagas would have to come up with “an optimal proposal for the most efficient use of this storage capacity.”

Moreover, Cenagas is redesigning its transport tariff regime. The current proposal would redraw the map, creating nine tariff zones across the Sistrangas.

The operator must also draw up the bidding and contract terms for the storage tender, a process that is likely to hew closely to the energy infrastructure tenders held by the Comision Federal de Electricidad (CFE).

It is supposed to be “similar to what CFE does in the pipeline world or the generation world,” Peter Nance, managing director of Que Advisors, told NGI. “They award a long-term contract for service, yet the rights of ownership would not reside with Cenagas.”

Per the policy draft, the cost of building and operating the strategic reserves would be “socialized.” In other words, Cenagas would charge users on the Sistrangas and the private pipelines operating outside of the main system. As a source of emergency supply, the inventories provide a system-wide benefit that cannot be recovered on a per-usage basis, according to Rosales.

“Under ideal conditions, over the 25 or 30 years that this facility is operating we would never have to withdraw even a gigajoule from storage, so the costs need to be distributed among all gas users,” Rosales said.

The cost burden would be proportional based on each pipeline system’s share of national gas consumption, Rosales added. “If 80% of the gas consumed on these systems corresponds to Sistrangas, then Sistrangas users will have to pay a postage stamp tariff that covers 80% of the storage costs, while the other systems pay the remaining 20%.” The cost recovery mechanism for the private pipelines has yet to be defined.

The Mexican government, through Cenagas, is to own the 45 Bcf held in the strategic inventories, although it is up to Cenagas to determine how to procure the gas.

According to Rosales, the two most developed ideas on the table are to incorporate the molecule cost into the project tenders, or to go out to the market at a later stage and buy the 45 Bcf in a separate tender process.