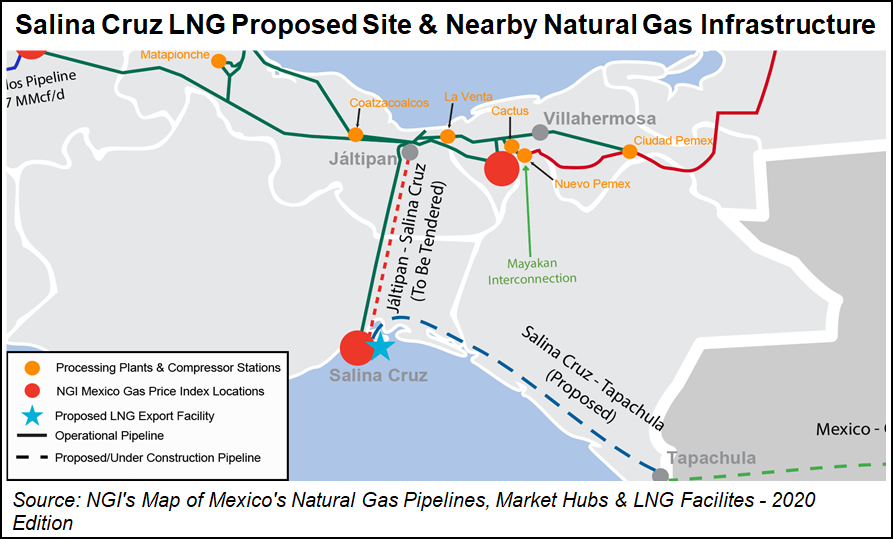 Worth around $14 billion, the list of 39 projects is meant to jumpstart the ailing economy and also opens space for the private sector to participate in key national projects.

“It’s very important that we all know that we can’t go alone, that the public sector can’t reactivate economic activity on its own,” President Andrés Manuel López Obrador said during the announcement of the plan.

Analysts see Mexico’s economy shrinking by as much as 10% this year.

Of the 39 announced projects, seven are already underway, and five are considered to be energy-focused.

State oil giant Petróleos Mexicanos (Pemex) will oversee two petrochemical projects and refinery upgrades at Tula and Cadereyta. The energy projects do not include power plants.

The Salina Cruz liquefaction project will require 25 billion pesos in investment, or about $1.2 billion, and will be spearheaded by Comisión Federal de Electricidad (CFE) and La Administración Portuaria Integral (API).

During the announcement, the president was flanked by business leaders including Carlos Salazar, the head of business chamber Consejo Coordinador Empresarial (CCE).

Salazar underlined the importance of the United States-Mexico-Canada-Agreement, or the USMCA, to Mexico crawling out of its economic hole.

López Obrador said that more projects would be announced in the future. All the new projects are set to commence works next year.

The most newsworthy of the government’s announcement from an energy perspective was the Salina Cruz LNG project in Oaxaca state.

In August, López Obrador mentioned Ensenada, Topolobampo and Salina Cruz as sites the government was looking at for potential export projects. The president said sending U.S. gas out of LNG plants in Mexico made sense because Texan gas is “the cheapest in the world.”

He mentioned Asia and Central America as markets for the molecule.

Salina Cruz connects to Jáltipa on the other end of the country via the Jáltipan-Salina Cruz natural gas pipeline, which would give the liquefaction project access to both Pemex production and gas from Texas via the Sur de Texas-Tuxpan marine pipeline. Another pipeline along the same route has also been previously planned.

Meanwhile there are two other LNG projects planned for Mexico’s Pacific coast that aim to also import U.S. gas and then re-export it to energy-hungry Asian markets.

The economics of U.S. Gulf Coast projects “just aren’t as strong and don’t make as much sense as Mexican projects,” she said, adding, “Mexico could not be in a better position from an economic fundamentals and supply perspective to really feed into that opportunity.”

Wood Mackenzie analysts think ongoing delays in reaching FIDs could lead to a global supply/demand gap of more than 100 million metric tons/year by 2030.

Other projects like Tellurian Inc.’s Driftwood LNG and NextDecade Corp.’s Rio Grande are not expected to sanction their respective projects until 2021 at the earliest.