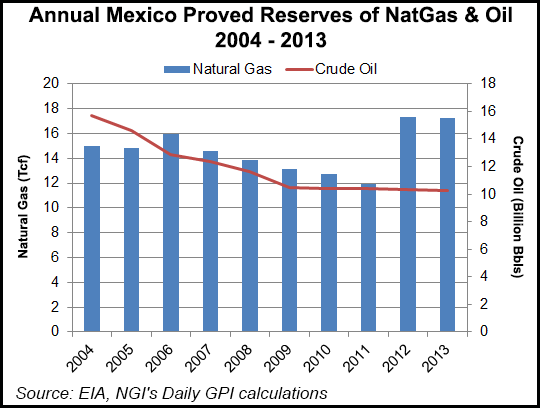 According to data from the energy ministry’s Summary Record of Hydrocarbon Reserves, part of the Hydrocarbons National Information System, Mexico’s proven reserves totaled 13.44 billion boe on Jan. 1, down 3.1% from 13.87 billion boe at the beginning of 2013.

The energy ministry did not have figures for probable or possible reserves for 2014.

“The process of certifying the country’s proven oil reserves as of Jan. 1, 2014, has been completed,” the energy ministry said in a translated statement, adding that Pemex performed the evaluation of reserves, which was then certified by an independent third party.

“The National Hydrocarbons Commission will then analyze the information from both reports. If approved, the energy ministry will record and disclose the reserve totals and will notify third parties and Pemex,” the statement said.

Last Thursday, Pemex signed memorandums of understanding (MOU) with Total and GDF. The agreements call for increased cooperation on technological issues and to exchange experiences in other fields.

“Specifically, the MOU with GDF lays the foundation for the development of technical cooperation projects aimed at protecting the environment and supporting the fight against climate change and sustainability through energy efficiency measures, cogeneration, water treatment and reduction of emissions of greenhouse gases,” Pemex said in a translated statement. “Also, both parties will work together in integrated infrastructure for the treatment and transportation of natural gas, as well as liquefaction and regasification plants.

“In turn, the MOU with Total will share technologies related to exploration and production, especially in deep water, as well as industrial safety and occupational health activities.”

Pemex said it has also forged an agreement with Total “to evaluate future business options in unconventional fields such as shale gas and share best practices in refining processes, sulfur recovery, cleaner fuels and reconfiguration of industrial processes.”

Last summer, President Enrique Pena Nieto unveiled an energy reform plan to Mexico’s Congress of the Union, including a proposal to open the nation’s energy industry to private investment. The reforms were designed to increase oil and gas production, decrease electricity costs and boost the country’s competitiveness. Congress approved the reforms in December, and they were swiftly enacted by a majority of Mexico’s state legislatures (see Daily GPI, Dec. 12, 2013; Aug. 14, 2013).

Additional energy reform legislation is expected to be introduced in Congress in May.