Mexican state oil company Petróleos Mexicanos (Pemex) will be the operator of the Zama oilfield offshore Mexico, which was discovered in 2017 by a consortium led by Talos Energy Inc. 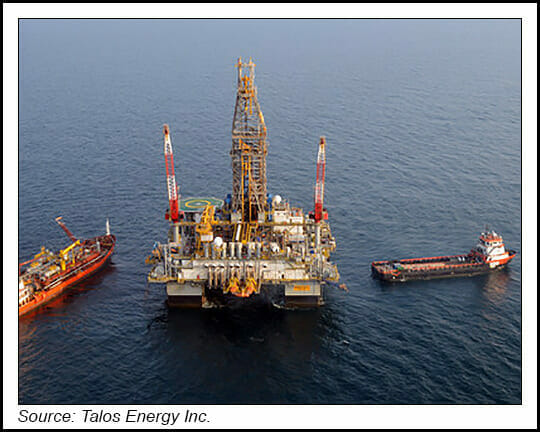 The decision culminates one of several high-profile skirmishes between President Andrés Manuel López Obrador’s government and the private energy sector.

“We are disappointed that despite our consistent track record of success, safety and progress we were not provided the opportunity to retain our role as operator for the benefit of the project,” said Talos CEO Timothy Duncan.

The discovery spans the shallow water Block 7 operated by Talos and a neighboring area operated by Pemex. Block 7 was awarded to the Talos-led consortium through Mexico’s Round 1.2 bidding process in 2015 under the previous government, leading to the discovery during the contract’s exploration phase.

Under President Andrés Manuel López Obrador, however, Pemex began making the case that it was the rightful operator of the field, despite an independent assessment that said about 60% of the resource was located within Block 7.

Pemex then commissioned its own third-party assessment, which found the state-owned firm to own 50.43% of the reservoir.

Talos has until now held a 35% operating interest in Zama.

Under the new arrangement with Pemex as operator, Talos will maintain a 17.35% participating interest in the field, and expects submission of a unit development plan by the working interest partners for regulatory approval within 6-12 months. Approval of the development plan is “a critical step before the parties can make a final investment decision (FID) in 2023,” Talos management said. “Talos will participate in activities relating to reaching FID, while also continuing to evaluate various strategic and legal options.”

Houston-based Talos and its partners, Wintershall Dea AG and Harbour Energy plc (the former Premier Oil plc), had originally planned to reach FID at Zama by the end of 2020, and to achieve first oil within 2.5 years afterward.

Zama is estimated to contain recoverable resources of 735-950 million boe, with capability to produce over 160,000 boe/d once fully developed.

Talos has invested about $104 million in Zama since 2015 “and these past investments are subject to cost recovery under the production sharing contract,” the firm said.

Duncan said that despite the management team’s disappointment in the latest decision, “we understand how important accelerated first oil from Zama is for the Mexican energy sector and all of the company’s stakeholders and we will work with the urgency required to finalize the unit development plan so FID can be reached.”

After taking office in December 2018, López Obrador, a vehement energy nationalist, suspended bid rounds, farmout tenders, and service contract migrations, the three mechanisms through which new exploration and production (E&P) contracts could be awarded to non-state oil and gas producers.

Development of the 100-plus E&P contracts awarded under the previous regime has been allowed to proceed, along with privately negotiated farm-ins to existing contracts. Russia’s PJSC Lukoil, for example, recently acquired a 50% operating interest in the Ichalkil and Pokoch offshore fields in a transaction valued at $435 million.

Talos added it does not expect any material changes to its 2022 capital expenditures guidance as a result of Sener’s decision.